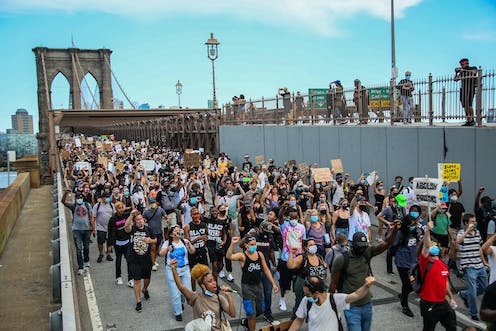 The massive protests that erupted across the United States – and beyond – after the police killing of George Floyd are billed as anti-racist mobilizations, and that they are. Demonstrators are denouncing police violence in minority communities and demanding that officers who abuse their power be held accountable.

But I see something more in this wave of American protests, too. As a sociologist specializing in Latin America’s human rights movements and policing, I see a pro-democracy movement of the sort more common south of the border.

The Latin Americanization of United States

Normally, U.S. protests have little in common with Latin America’s.

Demonstrations in the U.S. are usually characterized by pragmatic, specific goals like protecting abortion access or defending gun rights. They reflect, for the most part, an enduring faith in the constitution and democratic progress. American protests are rarely nationwide, and even more rarely persist for weeks.

Latin America protests, on the other hand, are often sustained movements with ambitious goals. They seek regime change or an entirely new constitutional order.

Take Venezuela, for example. There, millions have been protesting the autocratic President Nicolás Maduro for years, despite brutal suppression by police and the military – though the opposition has not yet succeeded in ousting him. Even Chile, a relatively stable democracy, in 2019 faced massive anti-inequality demonstrations demanding, among other things, that the country rewrite its dictatorship-era constitution. 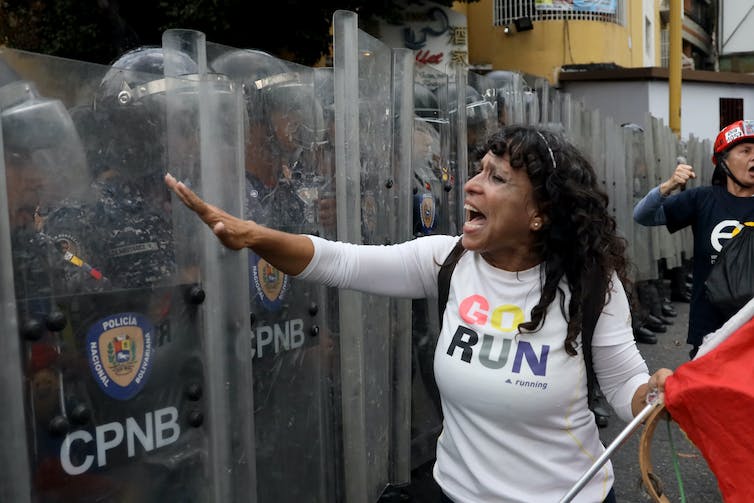 An anti-government demonstrator shouts at police officers during a protest on March 10, 2020 in Caracas.Edilzon Gamez/Getty Images

Americans’ famed faith in democracy has been eroding under Trump, a leader who, as a recent article in the Journal of Democracy noted, is “increasingly willing to break down institutional safeguards and disregard the rights of critics and minorities.” There is growing concern that voter suppression, especially targeting minority voters, will undermine the 2020 election.

An ongoing study by sociologist Dana Fisher from the University of Maryland found that of hundreds of protesters in multiple cities, “people participating in the recent protests are extremely dissatisfied with the state of democracy.” Just 4% of respondents said they were “satisfied with democracy,” the author reported.

And these demonstrations are spreading across the country, say protest researchers Lara Putnam, Jeremy Pressman and Erica Chenoweth – including into small, largely white towns with deeply conservative politics. In terms of nationwide participation, they have eclipsed the women’s marches of January 2017. 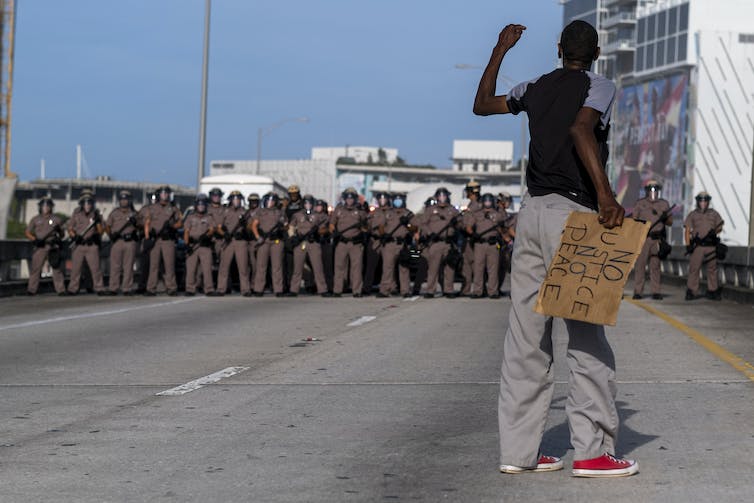 Florida state troopers at a rally in response to the recent death of George Floyd in Miami, Florida on May 31, 2020.Ricardo Arduengo/AFP via Getty Images

For Latin Americans, much about the United States has become familiar since Trump took office that January.

We recognize the strongman president, the politicizing of democratic institutions like the Justice Department, the open political corruption, partisanship on the Supreme Court and the president’s reverence for military leaders. As if to complete the Latin Americanization of this once archetypal democracy, Trump even deployed troops to suppress civilian protesters – something that’s almost never done in the United States.

Washington has historically had few qualms, however, about using its military to influence Latin American politics and society. From the 1960s through the 1980s, authoritarian military governments ruled Argentina, Brazil, Chile, Uruguay and beyond, with overt and covert U.S. support.

Democracy retook Latin America by the last quarter of the 20th century, but the region’s recovery from authoritarianism is far from finished. My research on civil-military relations is part of a large body of academic literature showing that military forces remain a latent presence behind Latin America’s democratically elected governments. The scholar Cynthia Enloe calls this the “ideology of militarism.”

From Nicaragua to Venezuela and Bolivia, many elected governments in the region have devolved into essentially authoritarian regimes. Their populist leaders use quasi-constitutional methods like plebiscites, voter suppression and constitutional amendments to strengthen their power.

In a similar way, Trump’s undemocratic tendencies explain some of the energy driving these young, multiracial crowds on American streets today. According to University of Maryland researcher Dana Fischer, 45% of white protesters surveyed said Trump motivated them to march, compared to 32% of black people. 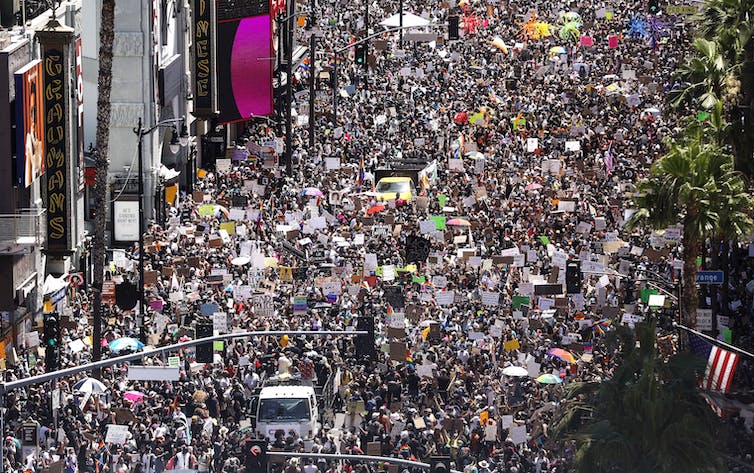 An anti-racist protest in Los Angeles on June 14, 2020. Rarely has the US seen massive, sustained, nationwide protests.Mario Tama/Getty Images

As Black Americans have long recognized, police brutality is an instrument of authoritarian repression. In some Latin American countries, police routinely execute those they determine to be gang members, drug traffickers or common criminals and face no consequences. We call it police vigilantism.

Brazil is home to one of the world’s most lethal police forces. Last year, police in the state of Rio de Janeiro killed a record 1,810 people. The victims are predominantly young black and brown men from poor neighborhoods.

In comparison, local police in the United States – which has about 100 million more people than Brazil – killed 1,004 people nationwide in 2019, according to a Washington Post analysis. Half of them were people of color aged 18 to 44. Most were male. 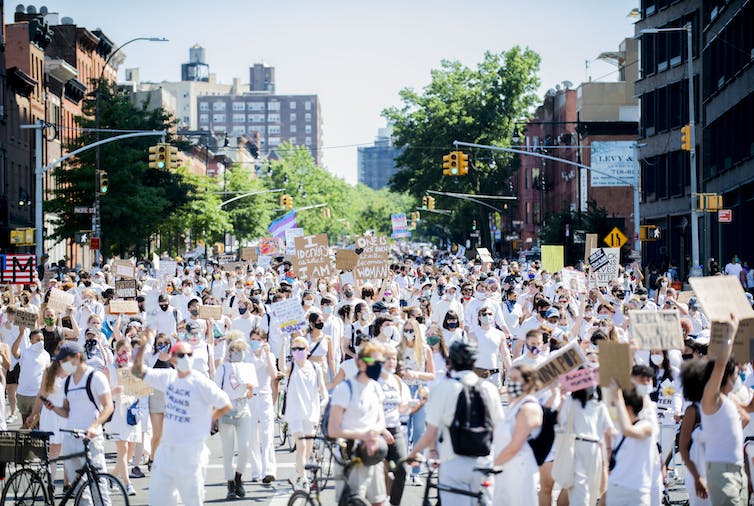 The raw numbers may be lower, but I’m struck by the similarity of the victims and the rationale behind the killings – as well as the impunity that usually follows police shootings.

I believe it is the overlap of continued police violence with the broader authoritarian creep in the U.S. that explains this unusual mass protest movement. Millions of Americans are taking to the streets for the same reasons as their Latin American counterparts – to fight for their lives, and for their democracy.

Lilian Bobea a mandate holder at the Working Group on the use of mercenaries as a means of violating human rights and impeding the exercise of the right of people to self-determination.