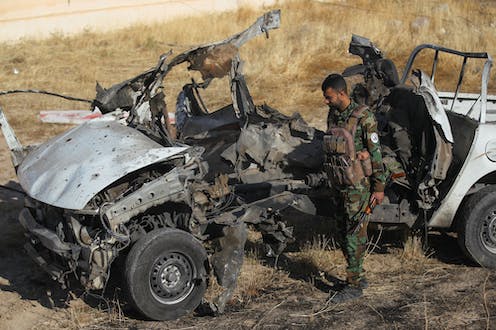 An Iraqi militia member inspects the site of an Islamic State attack on Iraqi troops on May 3.Ahmad Al-Rubaye/AFP via Getty Images

An Islamic State follower posted the hashtag “#AmericaBurning” in a discussion on the Telegram chat system in early June, and another posted a message that read “You are waking up this morning to news of the destruction of America, the dismantling of its States, and civil war.”

Another Islamic State website proclaimed “Destruction, fragmentation. America is burning,” while an Islamic State supporter posted photos in the same Telegram forum of the riots, writing “O Allah, burn them like they burned the lands of the Muslims.”

IS supporters are rejoicing at tensions from both peaceful protests and occasional violence in U.S. streets in the wake of George Floyd’s May 25 death. As a scholar who tracks the Islamic State groupand its affiliates, I have followed how the Islamic State has been exploiting the effects of the coronavirus on its enemies and celebrating the effects of racial tensions and the pandemic in America. 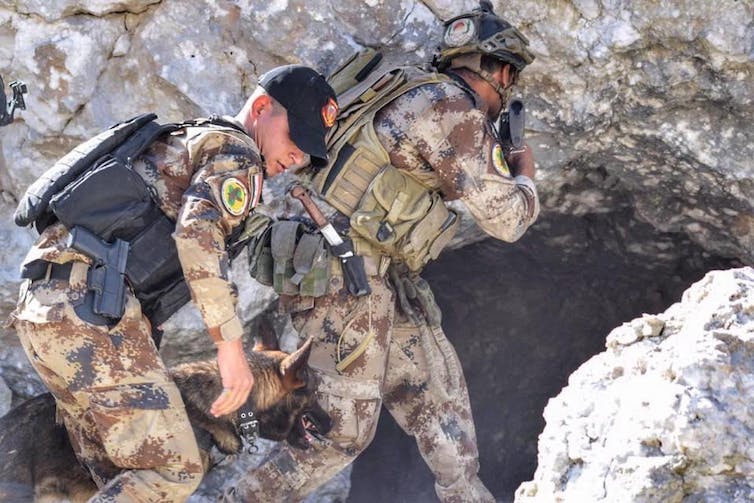 An opportunity in the pandemic

Islamic State followers are excited at the prospect of a massive Western death toll from the coronavirus, which they defined as “God’s smallest soldier.”

They also see the virus at work in U.S. military pullbacks related to the coronavirus – such as the March announcement from the Pentagon that it would stop sending troops to Iraq for at least two months.

In addition, the U.S. pulled some troops out of Iraq, withdrew many more from six frontline operating bases and ordered the troops remaining in the country to stay on their bases – moves that ended most joint missions with local Iraqi and Kurdish troops.

In Iraq, the Islamic State has reacted by stepping up attacks. They have targeted pro-government Shiite militia members and Iraqi and Kurdish troops, who now have less U.S. support to help defend them.

British and U.S. air strikes are, however, still targeting the group’s fortified cave hideouts in northern Iraq, which Iraqi ground troops are also continuing to attack, albeit with fewer troops due to coronavirus base lockdowns. 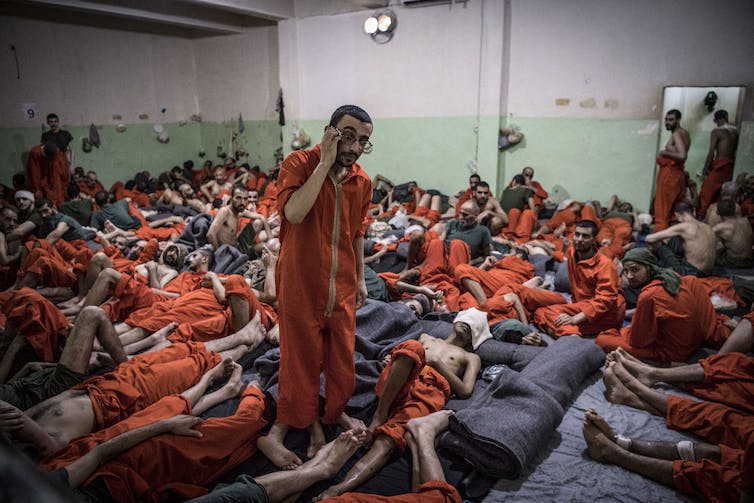 Men suspected of being part of the Islamic State group are held in crowded Kurdish-run prisons in Syria.Fadel Senna/AFP via Getty Images

IS also fears the virus

For all the opportunities the pandemic seemingly offers the Islamic State, the group is also worried about how the virus affects them. In Syria, Kurdish forces are holding captive as many as 12,000 Islamic State fighters and 70,000 of their family members, mostly women and children, in vast, cramped, unhygienic internment camps. There is no possibility of social distancing.

The prisoners live in terror of the pandemic breaking out among them and have been rioting in efforts to escape the camps. In May, Islamic State prisoners briefly rose up and took control of a prison holding as many as 5,000 captives before they were suppressed.

Islamic State leaders have not only called for their fighters to attack the lightly guarded camps to free the prisoners, but also expressed concern about the disease spreading among their own forces.

Calls for jihad in the West

A U.S. Department of Homeland Security bulletin in late March warned that the Islamic State’s newsletter had called for attacks on U.S. and European health care targets that are strained by the pandemic. The Islamic State has ordered its followers not to travel to Europe, where the virus outbreak is far worse than in the Middle East. But the group has suggested that its followers who are already in Europe exploit the chaos, calling for “new strikes … similar to the strikes of Paris, London, Brussels and other places” where followers have used bombs and firearms to kill dozens of people in recent years.

The Islamic State is even suggesting that killing “infidels” could be a way for followers to protect themselves from the virus, stating, “They should also remember that obedience to God – the most beloved form of which is jihad – turns away the torment and wrath of God.” 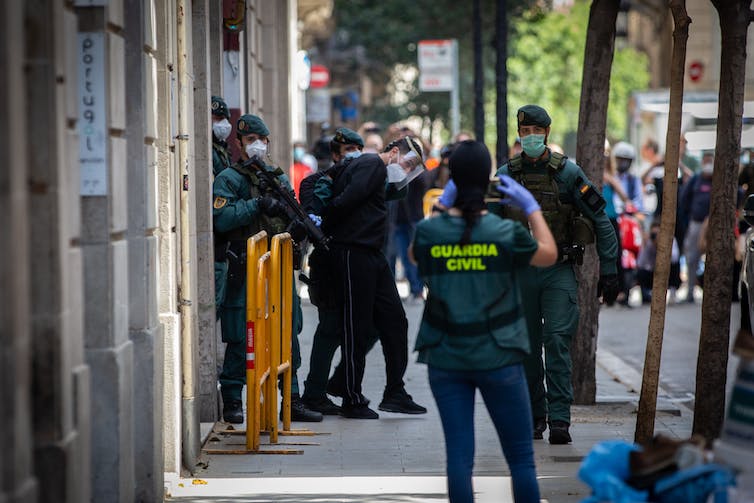 Limited activity in the Europe

Those calls may have had some response.

On March 11, German authorities arrested four suspected members of an Islamic State cell who were allegedly planning an attack on American military facilities with explosives. In April, a Sudanese man stabbed seven people, killing two, in southeastern France. Most recently, on June 20, a Libyan man stabbed six people in a park in Reading, England, killing three.

I do not believe these attacks in France and Britain or the disrupted plot in Germany signal a resurgence in Islamic State activity in the West. IS’s messaging has lost much of its galvanizing appeal since the group lost its transnational state, which had inspired many followers, in a five-year war in Syria and Iraq.

My research shows that calls for attacks on the FIFA World Cup soccer finals in Russia in 2018 and against Fourth of July festivities in the U.S. in 2019 were never acted on. While the Islamic State group can still carry out attacks in the Middle East and through its affiliates around the world, their gloating at American coronavirus deaths and racial tensions does not necessarily translate to a real threat to the U.S.

Brian Glyn Williams does not work for, consult, own shares in or receive funding from any company or organisation that would benefit from this article, and has disclosed no relevant affiliations beyond their academic appointment.