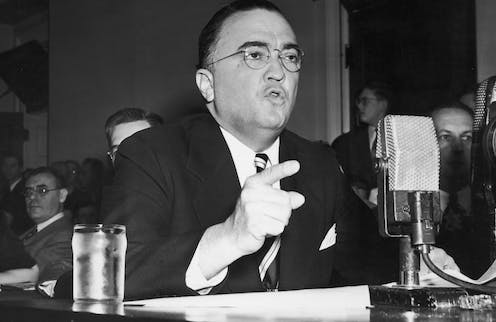 Throughout his presidency, Donald Trump has denounced his critics for the same claims made against him, attacking their credibility and portraying himself as a victim of conspiracies.

His lies are well documented, yet he accuses reporters of perpetual deception. He was impeached for obstruction of Congress and abuse of power, yet he accuses Joe Biden of corrupt practices in Ukraine.

By employing these tactics, Trump is lifting freely from former FBI Director J. Edgar Hoover’s playbook. Hoover, for example, lived a closeted gay life yet networked with Nazis who murdered people for being gay, and he blackmailed gay people to amass power.

In 1969, The New York Times surmised that Hoover “wielded more power longer than any man in American history.” The FBI director used his power to undermine presidents Franklin D. Roosevelt and Harry S. Truman, as well as the New Deal, when he incited the “Red Scare” to keep his job in 1947.

Copying Hoover’s playbook, Trump made a perennial claim for power when he recently tweeted “LAW & ORDER!” in the wake of Black Lives Matter protests.

Both Trump and Hoover, moreover, employed the controversial political operative Roy Cohn. It was Cohn who introduced Trump to Roger Stone after Cohn served as Hoover’s mouthpiece for decades. In light of this, Trump’s appeal for alternative facts, his urge to mask improprieties, comes as no surprise.

As a professor of communication studies who has written about Hoover’s propaganda and who was a lead archivist for declassified FBI records at the National Archives, I find the similarities between Hoover and Trump especially troubling as the U.S. faces historic challenges to its democracy.

Trump often portrays himself on Twitter as a victim of conspiracy. He tweeted about a “Crooked and Demented Deep State, and a probably illegal Democrat/Fake News Media Partnership.” His complaint of an “illegitimate impeachment hoax” echos several other false claims of victimization.

Similarly, Hoover used warnings of the “fifth column” to suggest that the New Deal was a conspiracy. The term was coined by a general under Francisco Franco in the Spanish Civil War who boasted that four columns of nationalist rebels surrounded Madrid while a “fifth column” plotted within.

Hoover warned in 1950 that “Communist fifth columns” sought the “violent and complete destruction of the American Government.” He called the New Deal an “international conspiracy,” a “revolutionary movement,” and referred to it as Communism.

Trump often suggests that appearance betrays reality, casting opponents as fake, deceitful and subversive – people who should be discredited.

Similarly, Hoover told Drake University students in 1940 that “fifth column methods” worked by “falsehood and fakery … America may not withstand the fakers.” In 1947 he told Congress that liberals were “hoodwinked and duped” by the “deceit, the trickery, and the lies of the American Communists.”

Trump uses similar tactics against journalists, portraying journalism as “fake news.” He complains about the “Fake Whistleblower” and “phony informer” and the “phony Impeachment Hoax.”

Conspiracy stories and vermin metaphors pair well. The trope was used against ethnic minorities in Nazi Germany and by U.S. mafia crime families against mob informants.

Hoover used animal metaphors to attack his enemies, something Trump deploys frequently to belittle his critics.

In a 1936 speech to the Boys Club of America, Hoover described New Dealers as “scuttling rats in the ship of politics, gnawing at its timbers, besmirching its ideals, and doing their utmost to wreck our system of government.”

In 1950 he wrote in The Elks Magazine that “Communists are interested in infiltrating into the most vital industries of the nation…. It is the old story of once a rat comes into a house through a hole in the floor, another rat is sure to follow.”

Similarly, Trump tweeted that Democrats “don’t care about crime and want illegal immigrants, no matter how bad they may be, to pour into and infest our Country” like vermin or insects.

Trump described Elijah Cummings’ congressional district as a “disgusting, rat and rodent infested mess.” He tweeted that his former operative “Michael Cohen only became a ‘Rat’ after the FBI did something which was absolutely unthinkable.” As for journalists, Trump has called them “these animals in the press … some of the worst human beings you’ll ever meet.”

Hoover was America’s chief promulgator of Americanism, the doctrine of white Anglo-Saxon Protestant nationalism. Leaders like Theodore Roosevelt, anxious to establish Anglo-American dominance at home and abroad, popularized the term beginning in 1894. By the Cold War, it was primarily used by Republicans to associate patriotism with conservative values and cast liberals as un-American.

Hoover frequently used the term. In 1947 he told Congress that the “best anecdote to Communism is vigorous, intelligent, old fashioned Americanism with eternal vigilance.” The House un-American Activities Committee soon afterwards held public trials to accuse liberals of Communism, costing them their jobs and livelihoods.

Trump also calls his credo Americanism. At the 2016 Republican National Convention, he said that the “most important difference between our plan and that of our opponents, is that our plan will put America First. Americanism, not globalism, will be our credo.”

And in June 2016, Trump tweeted the following: “Hillary says things can’t change. I say they have to change. It’s a choice between Americanism and her corrupt globalism.”

When Hoover appealed to law and order, it was not the social contract but the laws of scientific racism that he invoked against the other. Similarly, Trump often expresses contempt for liberal democracy, and he often references his dominance over critics and marginal groups.

Today, the Black Lives Matter movement embodies a challenge to the political order that nationalists have sustained through propaganda and law enforcement. That order crystallizes Trump’s power, and he will likely attempt to consolidate it in the turbulent times ahead.

Stephen M. Underhill does not work for, consult, own shares in or receive funding from any company or organization that would benefit from this article, and has disclosed no relevant affiliations beyond their academic appointment.