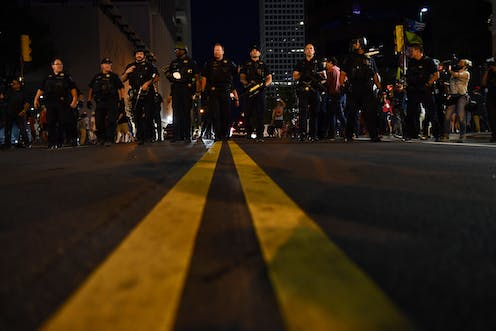 Police in Tulsa, Okla., march toward a crowd of demonstrators on June 20, 2020.Brendan Smialowski/AFP via Getty Images

Editor’s note: Calls to reform, defund or even outright abolishpolice in the U.S. are coming from many corners of American society. The Conversation asked several scholars who study different aspects of policing to explain what their research has found could help reduce police prejudice and violence.

Police have a saying, “better to be judged by 12 than carried by six,” acknowledging they might face a jury if they use excessive force, but it’s preferable to being killed in the line of duty. Many police oppose civilian oversight of their departments, which could prevent both criminal charges and death. Yet right now, all over the U.S., the public is judging police for how they act.

Some police officers question the usefulness of training in de-escalation techniques, which have been shown to reduce threats to them and members of the public. Officers often say it’s hard for civilians to understand how difficult it is for them to “keep cool” during chaotic and dangerous moments.

From our perspective as scholars of state repression and the security forces empowered to protect people, but also coerce them, we propose that police go beyond de-escalation and take a page from the protesters themselves.

Protesters also face hostile environments, whether police with batons and tear gas or agitators attempting to incite vandalism or rioting. To guard against escalation in those situations, many protesters go through training on nonviolent discipline.

For decades, U.S. civil rights activists have been trained to manage their emotional responses. Protesters in the Philippines and elsewhere have practiced responding to attacks without violence: link arms, drop down, don’t run. With this training, protesters are taught to strictly refrain from using physical violence, regardless of what they face.

This approach, if taken by police, would teach them to remain nonviolent in the face of verbal and even minor physical abuse like pushing or shoving. One former California police chief expressed the fear that small affronts could escalate into a large conflict: “It only takes one officer on that front line to lose his cool.”

To be sure, officers would still be allowed to defend themselves and others from real danger. However, many countries use less aggressive policing, avoiding the use of force, injuries and deaths that American police seem to treat as unavoidable. Disciplined nonviolence training would allow the public to expect as much of highly trained police officers as they do of protesters. 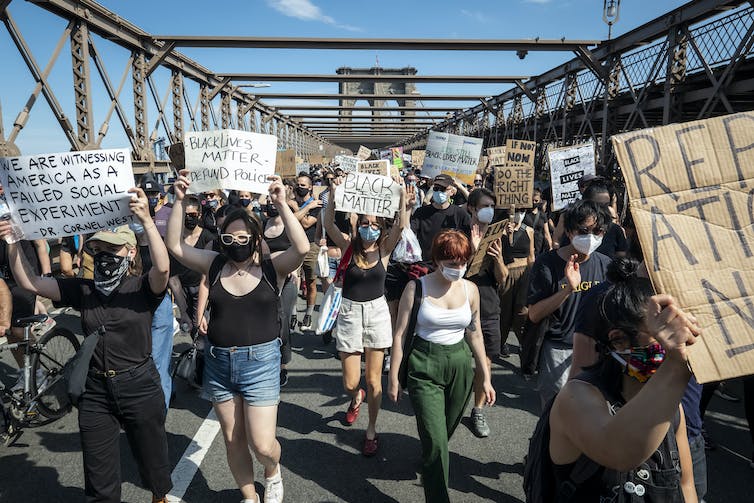 The public, and police, have high expectations of peaceful protesters, who are often trained in nonviolence.Ira L. Black/Corbis via Getty Images

As a former police officer, I know first hand the difficulties of policing. As a criminologist for more than 20 years, I recognize that the roots of American policing were racist and see violence in policing as emanating from the aggressive approach of law enforcement tied to that racism.

Using concepts like the war on drugs, police act like soldiers, breaking down doors; executing search warrants; and stopping and frisking passersby. Communities of color are hit particularly hard. Many people charged with minor offenses are poor; when they can’t pay the fines, they’re subject to arrest again.

This behavior destroys the community’s trust in the police and the criminal justice system. It also fosters a violent code of the street, because street justice now appears the only logical way to settle local disputes, rather than calling in the police.

There is a better way. Several years ago, colleagues and I outlined a new approach, which we call “situational policing,” that adapts policing styles to the current state of crime and neighborhood relations. It requires the police to work with residents to change these situations, making them safer and more secure.

We have developed these ideas recently with regard to preventing hate crime in rural communities and reducing community conflict in urban neighborhoods. In our book “The Violence of Hate,” criminologist Jack Levin and I describe how changing local situations can reduce both bigotry and crime.

We have found that these different situations relate differently to crime and fear of crime. Neighborhoods where residents know and watch out for each other are by far the safest. A community experiencing frustration and conflict with the police is the most dangerous. And neighborhoods where residents don’t know each other well, but rely solely on police for security, are somewhere in between.

Situational policing shifts the focus away from how many arrests a department makes and how many guns and drugs its officers seize. Instead, police seek ways to change neighborhood situations by helping residents deal with local problems in ways that that build connections and relationships among community members. When coupled with evaluations and citizen oversight that discourage aggressive policing, I believe this approach can turn conflict into collaboration.

Jennifer Earl received funding from the National Science Foundation (SES-1426721) to study protest policing in the 1960s and 1970s.

Jessica Maves Braithwaite has received funding from the United States Institute of Peace (G-1703-17347) to study organizations that engaged in dissent against governments in Africa.

Kirssa Cline Ryckman does not work for, consult, own shares in or receive funding from any company or organization that would benefit from this article, and has disclosed no relevant affiliations beyond their academic appointment.