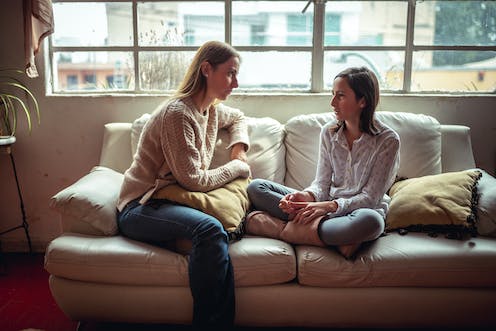 Talking about race is important, but not every family does it – or does it well.MStudioImages/Getty Images

Though race and racism are at the top of Americans’ public discussion, most white parents don’t talk about those issues with their kids.

Research on how white parents discuss race with their children is sparse. However, past research has shown that conversations about race, much less racism, are rare, even when these issues are highly visible – for example, during the Ferguson protests in 2014.

One study found that even though 81% of white mothers believed it was important to have such discussions, only 62% of them reported actually doing so. Of those who said they did, however, fewer than one-third of those people could actually recall a specific conversation.

To understand the issue more deeply, we examined surveys of more than 2,000 adults ages 18 and older, collected from May 21 to June 14, 2020, in four major U.S. cities – Chicago, Los Angeles, New Orleans and New York. We were seeking to understand how people’s views on race were influenced by their parents. It was part of an ongoing study looking at how people’s experiences during the COVID-19 pandemic have been shaped by their race.

Our initial findings indicate that among white respondents, 65% said their parents had “never” or “rarely” had conversations with them about racism when they were children.

We found that those whose parents talked with them about racism were themselves more likely to talk with their own children about it. However, even during this period of unrest, 27% of white parents of children between 6 and 11 years old told us they “never” talked with their kids about the need for racial equality.

Another 15% said these conversations were “rare,” and 34% said they happened “on occasion.” 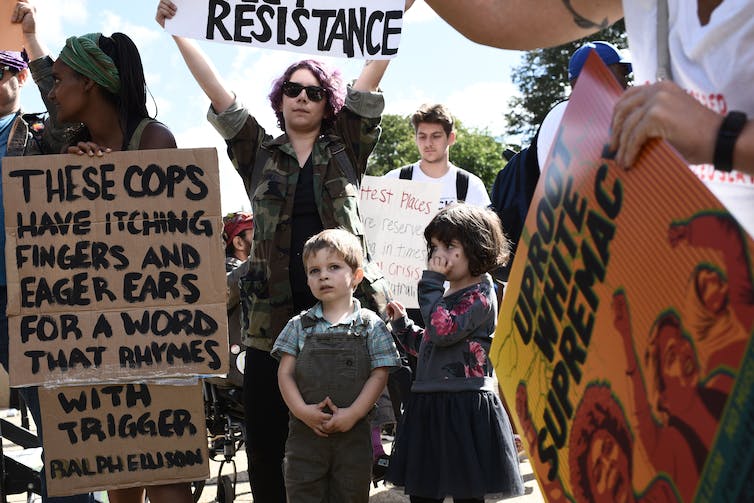 In this 2017 photo, a woman and her children join hundreds of protesters marching for racial justice in Washington, D.C.Eric Baradat/AFP via Getty Images

Research shows that the relatively small number of white parents who do discuss race with their children often use what are sometimes called “colorblind” approaches that downplay racism’s significance in American society. These conversations usually involve emphasizing the sameness between all people, and minimize or deny the idea of differences between races. Typical themes include “not seeing race” or “treating everyone the same,” which ignore or even reject the existence of white privilege and racism.

These discussions can promote a myth of meritocracy that claims anyone can succeed in the U.S. regardless of their race – a belief shared by 57% of the white respondents in our survey. The problem with this colorblindness is that it ignores how racism is embedded in society – for example, in where people live and what kinds of jobs and educational opportunities people have.

Sometimes conversations can also be explicitly or implicitly racist, relying on racial stereotypes premised on the idea of inherent differences between race groups.

Seldom are conversations anti-racist. An anti-racism dialog with children involves acknowledging racial inequalities and the historical and current reasons why they exist. They also include talking about ways a child could help actively undo racism and how not to be a bystander when they see racism being perpetrated. 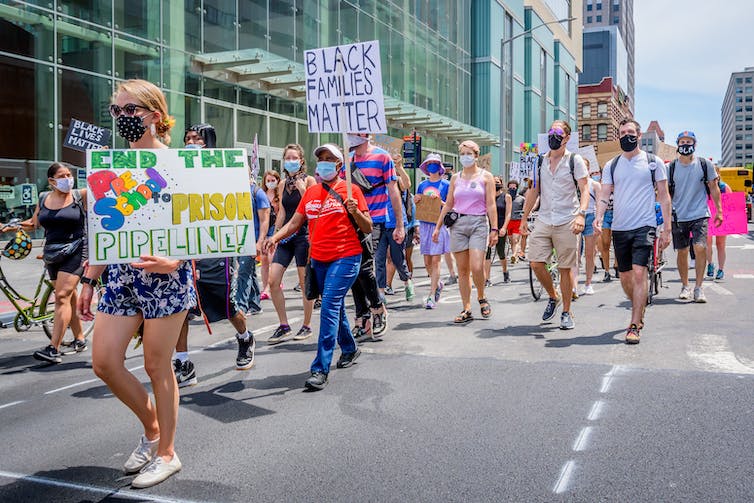 A crowd of protesters, including many white people, march to support Black families in Brooklyn in June 2020.Erik McGregor/LightRocket via Getty Images

Our data showed that white people who were taught by their parents about opposing racism and what our survey called the “importance of fighting for racial equality” were supportive of doing more to help racial minority groups hit harder by COVID-19.

By contrast, people whose parents had never or rarely talked to them about anti-racism were more likely to feel that racial minorities are themselves at fault for their higher death rates from COVID-19.

We also found that parents’ discussions with their kids helped them grow up to have more nuanced views on other aspects of racism in the U.S.

Three-quarters of adults who had, as children, talked with their parents “very often” about racism said that racial minorities do not have the same opportunities as whites. A similar share, 69%, of them said race plays a major role in the types of social services that people receive, such as health care or daycare. And 69% also agreed that race plays an important role in who gets sent to prison.

But of the adults whose parents “never” or “rarely” talked with them about racism, fewer than half – 47% – said racial minorities have different opportunities than whites. Similarly, fewer than half of these people felt that race plays a role in the types of social services people receive or in incarceration – 49% and 48%, respectively.

Resisting racism, challenging racist societal structures and advocating for equity have been an uphill battle shouldered predominantly by individuals, families and communities of color. Our research indicates that the more white parents talk with their children about the realities of American racism, the more aware those kids are, as adults, of inequalities in American life.

David Chae receives funding from the National Institutes of Health.

Leoandra Onnie Rogers receives funding from the Spencer Foundation, the National Science Foundation, and the Institute for Learning and Brain Sciences.