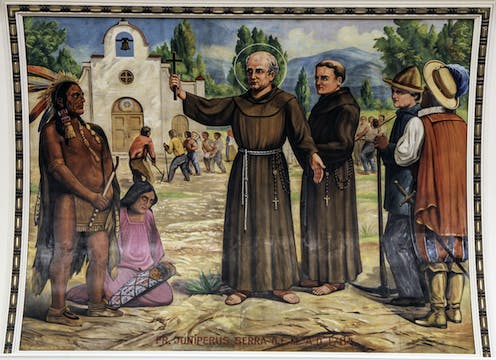 Statues of the Spanish missionary Junípero Serra were recently toppled in the U.S. cities of San Francisco, Los Angeles and Sacramento as part of a national movement for racial justice sparked by the police killing of George Floyd.

For some, Father Serra is a saint – literally: He was canonized by Pope Francis in 2015. For others, including some descendants of the Indigenous people “missionized” by Spain’s Catholic church, Serra represents genocide. 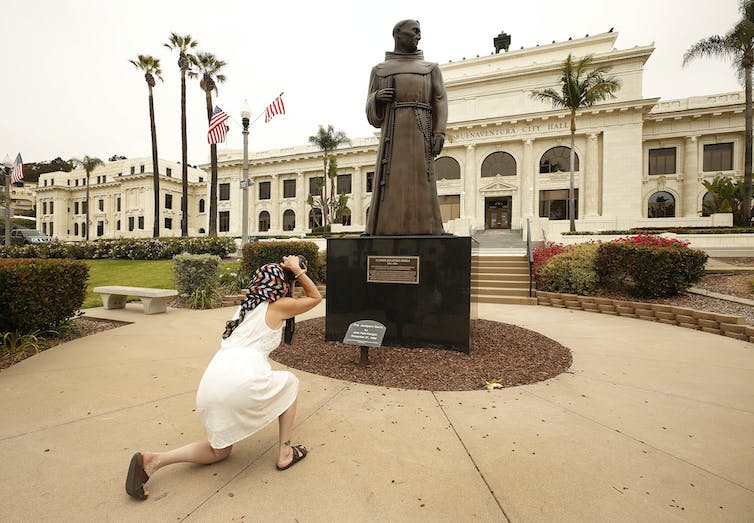 Unlike the British, who colonized the eastern United States, Spanish colonizers largely did not seek to explicitly eliminate the Indigenous peoples of the Americas. Instead, the army worked with Spain’s Catholic church to religiously convert and “civilize” them.

Spain achieved this, in part, through missions – which sent priests to build churches, spread Catholicism and teach European-style agriculture across the Americas. This process involved taking Indigenous peoples’ lands and turning Indigenous people into laborers for the Spanish empire.

Junípero Serra created the California mission system, which stretched north from present-day San Diego up to Sonoma. Born in Spain in 1713, Serra journeyed to “New Spain” – known today as Mexico – in 1749. For nearly two decades he built churches, taught and preached the gospel to Indigenous peoples.

As an “inquisitor” for the Spanish Inquisition in the Sierra Gorda mountains of central Mexico, Serra also accused several non-Indigenous people of witchcraft.

In 1767 Serra was appointed president of the already extensive Jesuit mission system of Baja California in Mexico. Before he arrived, Indigenous people had staged various armed revolts against the Spanish. Many Indigenous people also died from Spanish diseases brought by the conquistadors, like typhoid and syphilis.

Serra reached present-day coastal California in 1769 on Spain’s “Sacred Expedition” to settle the land and secure it ahead of other European powers. The events that followed are at the heart of today’s debates about Serra’s legacy, and the focus of my academic research on religion, colonization and Indigenous survival. 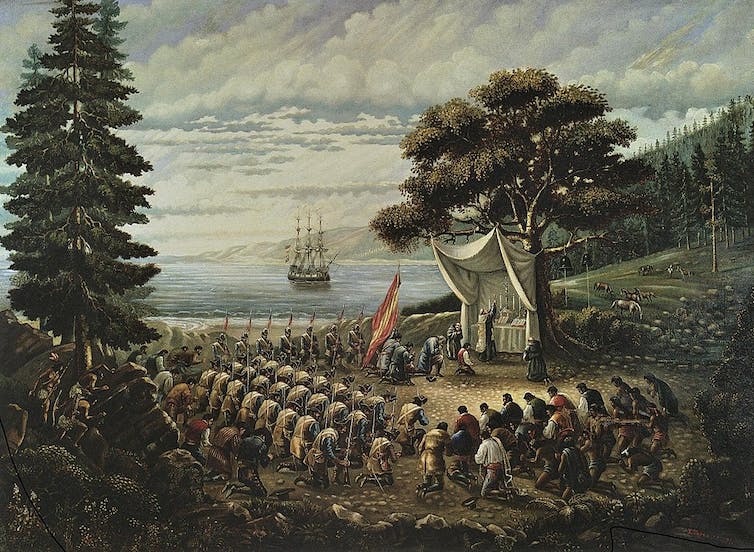 The 1770 mass by which Junípero Serra formally claimed the land of the Rumsen Ohlone peoples for the Spanish empire, in what is now Monterey, Calif.Painting by Léon Trousset (1877)

Serra’s defenders say he was a man of God who treated Indigenous people with respect.

Serra insisted that Spain’s presidios, or military bases, be built far from religious missions. He fought against the death penalty for Native people involved in a 1775 rebellion when the Spanish army wanted to execute them.

“St. Serra made heroic sacrifices to protect the indigenous people of California from their Spanish conquerors, especially the soldiers,” wrote the Most Rev. Salvatore J. Cordileone of the San Francisco Diocese, in a June 2020 letter after the city’s Serra statue was toppled.

Major avenues across California are named after Serra, but there is mounting pressure to change that. Stanford University has already removed Serra’s name from its main campus road.

“Junipero Serra is the person who brought the faith that I practice today,” said Andrew Galvan, curator of the Mission Dolores historic site, to The Telegraph.

But even Galvan, who is Native American, agrees the missions were a “disaster” for his Ohlone and Miwok ancestors.

According to the University of California historian Steven Hackel, Spanish missionaries commonly used violence to punish “Indios” who broke their rules. Serra approved such punishments. Those who tried to escape were tracked down and whipped. Unmarried Native women were locked in dormitories called “monjerios” at night to control their sexual activity.

Disease and death proliferated at the missions. An estimated 85,000 Indigenous people were baptized in Serra’s California. When the mission system ended in 1834, only 15,000 “missionized Indians” remained. The literary scholar Deborah Miranda, of California’s Ohlone/Costanoan-Esselen Nation, describes this period as “the end of the world.”

Legacy of the missions

After Mexican independence from Spain, mission lands in 1834 were divided up among Mexican settlers. Some “missionized Indians” in California received land grants, too, but many others became low-paid laborers on the Mexicans’ enormous new “ranchos.”

After the United States won California and other Mexican territories in 1848 following the Mexican-American War, American settlers and gold miners poured into the area and, according to historian Benjamin Madley, murdered Native Americans with impunity.

“Perpetrators, bystanders, survivors, and secondary sources indicate that non-Indians killed at least 9,492 to 16,094 California Indians, and probably more between 1846 and 1873,” writes Madley in his 2016 book “An American Genocide.” 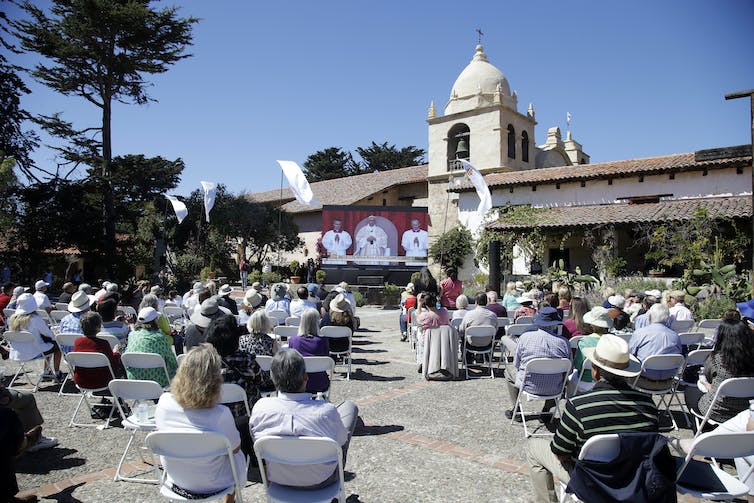 One modern consequence of all this history is that today California has few federally recognized Native tribes.

To gain federal recognition – which enables tribes to negotiate agreements with the government and use the Indian Health Service, among other benefits – tribes must prove unbroken tribal governance and cultural unity. Between the cultural destruction brought by Spain’s mission system, land loss under Mexican rule and American extermination campaigns, no Native tribes between Sonoma and Santa Barbara are deemed to meet federal criteria.

“Pro-Catholic scholars and leaders have yet to prove that the missions benefited the California Indians in a way that justifies/overshadows the mission’s coercive practices and disastrous effects,” says Jonathan Cordero, sociologist and leader of the San Francisco-area Indigenous descendants group Association of Ramaytush Ohlone.

On July 11, the mission Serra founded in Los Angeles, Mission San Gabriel, caught fire. The cause of the fire is under investigation.

Yve Chavez, an art historian whose Indigenous Tongva ancestors lived and were buried at Mission San Gabriel, is no Serra devotee. Still, she found the destruction of the 249-year-old church “devastating.”

“Some people might see these as monuments to Catholicism or Spain,” Chavez told the Los Angeles Times of California’s missions. But, she said, “This is something our ancestors made.”

Abel R. Gomez does not work for, consult, own shares in or receive funding from any company or organization that would benefit from this article, and has disclosed no relevant affiliations beyond their academic appointment.