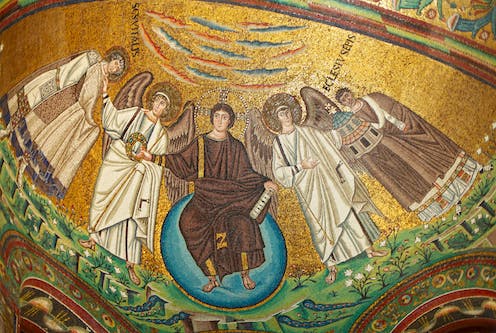 Cathedrals and chapels have played vital roles in the development of Christian culture.

As a scholar of the Bible, Judaism and Christianity, I have come to learn the historic importance of these structures and the pivotal role they play in the practice of many Christians’ faith.

Cathedrals and chapels not only provide a space for worship, but they are also vessels for the display of religious iconography and art.

Until the early fourth century A.D., much of early Christian art and space for worship occurred in catacombs – subterranean locations where Christians would bury members of their community.

It has traditionally been thought that Christians used such catacombs due to persecutions by the Roman government. However, such persecutions were periodic and not sustained. Other explanations have been offered regarding the regular use of the catacombs as a result.

In any case, such tombs became the repositories of art expressions in the early decades of the religion.

Prominent scenes include depictions of the Bible that highlighted deliverance from death.

Depictions of Jesus of Nazareth appear in these catacombs, but often borrowing from the likeness of the Greek god Hermes, who functioned as a messenger deity as well as a carrier of souls in the afterlife.

The cross as a widely displayed symbol of Christian faith would become more frequent only after the Roman emperor Constantine converted to Christianity in the fourth century A.D.

With imperial backing, Christians began to build their places of worship, known as “churches” from the Greek kuriake “belonging to the lord,” above ground.

Ancient temples across cultures, including the one in Jerusalem, generally were thought of as spaces where the god or goddess lived.

Many ancient and modern Christians believe that Jesus is physically present in communion – the ritual that in some Christian thought involves the actual transformation of bread and wine into the body and blood of Jesus.

As such, cathedrals such as the Basilica of San Vitale in Italy, constructed in the sixth century A.D., contain mosaics to depict Jesus as actually present in communion. These buildings tap into a widely held religious history that the deity dwells in the holy place.

Many of these ancient, pre-Christian temples, including the Temple in Jerusalem, were oriented from the east to the west. Christian cathedrals for the most part in both the ancient and modern world used this east to west axis as well. Some traditions placed communion toward the east – called “oriented” – and others toward the west – called “occidented.”

Notable exceptions occurred, such as in the Rockefeller Chapel at the University of Chicago, originally a Baptist school, whose chapel is oriented north to south.

The second major source for early Christian churches was Roman administrative buildings. The very name cathedral means “seat” and in Roman society was referred to the location where governors would adjudicate and oversee their districts. When the pope speaks from his seat of power, he speaks “ex cathedra.”

Roman temples had a different structure, but the Roman basilica, with its resonances of governance and imperial backing, was instead chosen, along with the east to west orientation of ancient temples, as the basic design for such cathedrals.

How chapels came to be 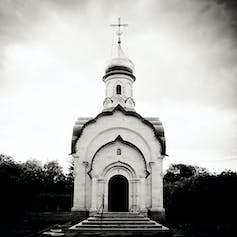 In contrast to the often large and impressive designs of cathedrals, chapels in Christianity represent a smaller scale conception of religious worship.

The term chapel derives from Martin of Tours, a bishop in the early church from France who was wearing a cloak while walking past a poor man. Martin was reminded of Jesus’ words in the Gospel of Matthew that helping the poor was, in effect, to help and worship God. Martin gave the poor man his cloak and the destitute person revealed himself to be Jesus himself.

These spaces of worship did not have musical instruments to accompany the service. As a result, the word a capella, meaning “according to the chapel” or “in the chapel style,” reflects the manner of worship in the small church.

Samuel L. Boyd does not work for, consult, own shares in or receive funding from any company or organization that would benefit from this article, and has disclosed no relevant affiliations beyond their academic appointment.