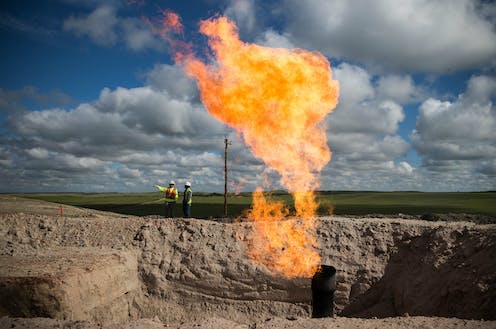 If you’ve driven through an area where companies extract oil and gas from shale formations, you’ve probably seen flames dancing at the tops of vertical pipes. That’s flaring – the mostly uncontrolled practice of burning off a byproduct of oil and gas production. Over the past 10 years, the U.S. shale oil and gas boom has made this country one of the world’s top five flaring nations, just behind Russia, Iran and Iraq.

I am an atmospheric scientist studying trace gases – chemicals that make up a small fraction of Earth’s atmosphere, but can have significant effects on the environment and human health. In several recent studies with graduate and undergraduate students, I have shown how routine flaring is inaccurately assessed and creates a sizable source of air pollution.

Due to a rapid oil price drop in the spring of 2020, new oil exploration has plummeted and production is running at reduced levels. But the industry can rapidly resume activities as demand and prices recover. And so will flaring.

Regulatory agencies, under pressure from environmental groups and parts of the industry, are finally considering rules to curb flaring. But can this wasteful and polluting practice be stopped?

Each operating shale oil well produces variable amounts of “associated” or “casinghead” gas, a raw gas mixture of highly volatile hydrocarbons, mostly methane. Producers often don’t want this gas unless it can be collected through an existing network of pipelines.

Even when that’s possible, they may decide to dispose of the gas anyway because the cost of collecting and moving it can initially be higher than the value of the gas. This is where flaring comes in.

Routine flaring is common in the Bakken shale formation in North Dakota, the Eagle Ford shale in south-central Texas and the Permian Basin in northwest Texas and New Mexico. Texas has flared about as much gas annually as all of its residential users consume. In the Permian Basin alone, about US$750 million worth of gas was wasted in 2018, without any public benefit.

In the Permian Basin region of west Texas, residents say gas flaring is polluting the air and making them sick.

At the same time, gas flaring contributes approximately 1% of man-made atmospheric carbon dioxide emissions globally. That is when flares combust hydrocarbons efficiently, converting them to carbon dioxide. In contrast, when flares burn poorly or go out, they pollute the air with more harmful gases.

Our studies in tworegions of the Eagle Ford shale in Texas showed that flares may be the dominant source of nitrogen oxides, or NOx in these rural areas. NOx emissions contribute to acid rain, ozone and smog formation, and can irritate the eyes, nose, throat and lungs.

We found that at the sites we studied, industrial combustion sources such as flares produced about 10 times more NOx than cars in the area. Although a single flare may be a relatively small source, the large number of flares and high variability of NOx production per flare can cause large-scale atmospheric impacts visible from space. 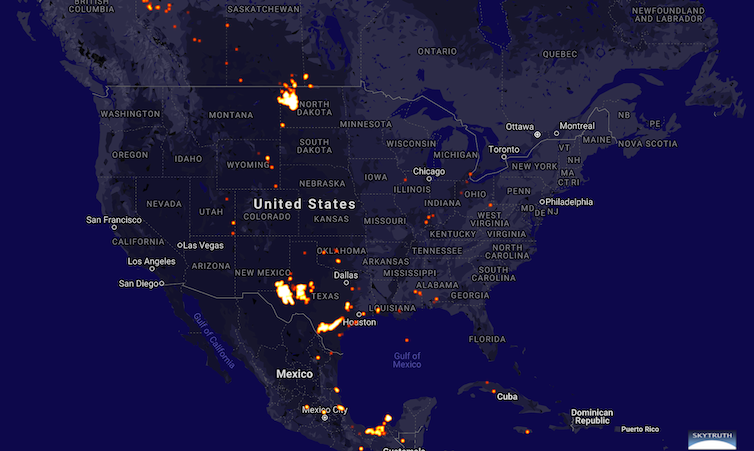 The nonprofit Skytruth posts time series views of gas flares seen from space, from 2012 to the present. Above, how flares looked in mid-July 2020.Skytruth.org

Almost all flares are open combustion sources. They can be detected from space as bright, fixed-location heat radiation sources. Scientists have developed algorithms to catalog this radiant heat and relate it to the reported volume of gas flared globally.

With the help of undergraduate students, sociologist Kate Willyard and I evaluated data from the satellite-based Visible Infrared Imaging Radiometer, or VIIRS. We calculated flaring volumes in the two Texas shale oil production regions, both on a per-wellpad and per-county basis. We then compared it to a database from the Texas Railroad Commission, which regulates oil and gas production, for the years 2012-2015, and found large discrepancies between the two datasets.

In total, the volumes reported in the state database were only around half of what the satellite observed. Another, less detailed bulk analysis by the research firm S&P Global found similar discrepancies for shale regions in New Mexico and North Dakota.

These large differences may be explained by reporting errors and by several flare operations that are simply exempted from volume reporting. But we suspect that there is an even more systemic, mundane explanation: venting – the direct release of raw gas to the atmosphere.

Venting gas is allowed only for a small set of operations in the industry if it can be done safely. It is usually prohibited because it emits hydrocarbons, including air toxics such as benzene that can cause cancer, birth defects or other serious health problems. 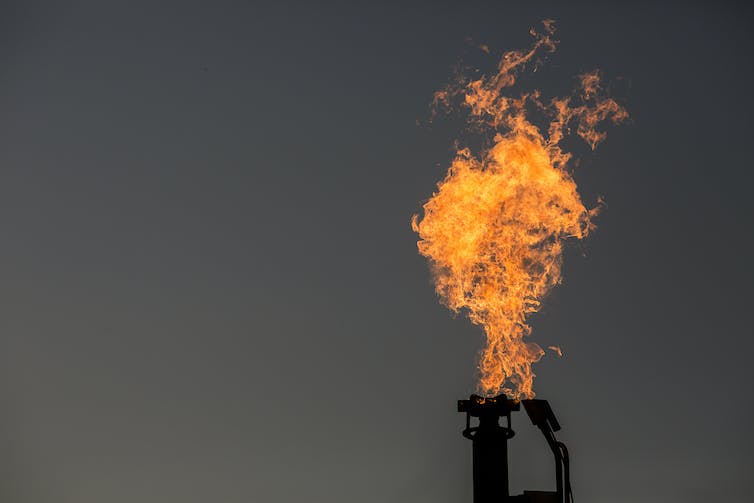 A natural gas flare burns at dusk in the Permian Basin in Texas.Bronte Wittpenn/Bloomberg via Getty Images

But venting mainly emits methane, which contributes to global warming and atmospheric ozone formation. Venting from flare stacks is illegal, since the flare is considered a waste treatment facility, but the practice apparently has increased over time.

Recent, higher-resolution satellite measurements of atmospheric methane over the Permian basin reveal that its emissions must be significantly higher than what is routinely reported to the Environmental Protection Agency, exceeding 3% of production instead of the more typically assumed 1-2%. Extra methane illegally vented through flare stacks would end up in the Texas Railroad Commission’s database, but satellites looking for heat radiation from combustion would not detect it.

That heat radiation is converted into flaring volumes, using total reported volumes to agencies nationwide. But if a much smaller volume is actually flared, with some of the gas not combusted but vented, the satellite data would overestimate flaring. This is a problem because scientists and the World Bank’s zero flaring initiative employ these satellite-based flaring estimates.

Investors say flaring can be avoided

For a decade conservation groups such as the Environmental Defense Fund have called on regulators to address the shale industry’s methane emissions and the rapid increase in flaring. The Obama administration adopted a new rule in 2016 to curb methane leaks and reduce flaring on public and Indian lands. Now the Trump administration is trying to undo this action, albeit with limited success.

Meanwhile, a new study commissioned by the Environmental Defense Fund and involving investors concludes that there are feasible and cost-effective ways for oil and gas companies to minimize flaring even without much regulation. Nevertheless, given that much of the industry has already spent a decade without widely employing such best-practice measures, I expect that oil and gas companies are likely to keep wasting and polluting for the foreseeable future unless government agencies impose tighter regulations.