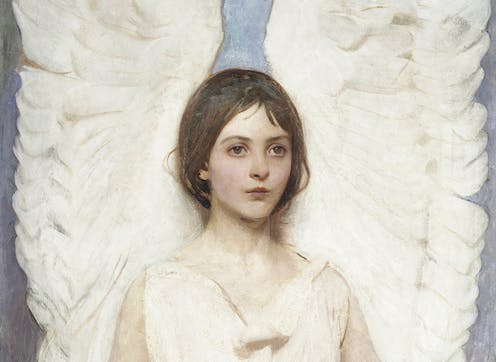 A detail from Abbott Thayer's 1887 painting 'Angel,' in which his eldest daughter appears as a heavenly figure.Smithsonian American Art Museum, gift of John Gellatly

Like everyone else, artists have been challenged by new conditions and routines since the start of the COVID-19 pandemic. Many have had to adjust what they make as well as how and where they work, coming up with innovative ways to be productive in makeshift studios with limited supplies and in relative isolation.

One thing is certain, though: In response to daily headlines of devastating illness, suffering and death, the need for creative expression and meaningful reflection on loss remains essential.

For the past several years, I’ve been researching the impact of disease on late 19th-century American artists. At the time, medical science was ill-equipped to manage rising rates of communicable disease, leaving art to help fill a need to comprehend and process illness.

One of the artists featured in my forthcoming book on art and disease is the painter Abbott Thayer, whose life and work underwent dramatic change following the death of his wife from tuberculosis. For the grieving painter, art functioned as a kind of medicine.

In the late 18th century, tuberculosis started to be tinged with romanticism; it was thought of as an illness that could lead to elevated consciousness, creative insight and intellectual acuity. The poet John Keats and the pianist Frédéric Chopin both died young from tuberculosis, cementing its reputation as an affliction of artists.

An early biographer of Robert Louis Stevenson argued that tuberculosis enhanced the writer’s talent, and in a sculptural relief depicting Stevenson during a stay in New York City, Augustus Saint-Gaudens portrays the bohemian writer with long hair and a cigarette in hand, looking alert and productive, despite being propped up by a stack of pillows in bed. As one critic observed, the relief captured Stevenson’s “picturesque unfitness,” as though illness heightened his allure. 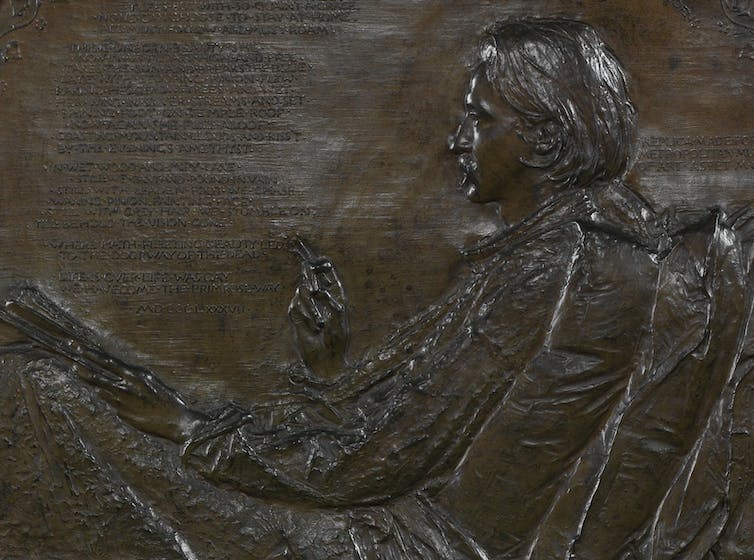 A detail of the relief of Robert Louis Stevenson sculpted by Augustus Saint-Gaudens.The Metropolitan Museum of Art

If the effects of the disease were poorly understood, so too was the way in which it spread.

For hundreds of years, the cause of disease was believed to be miasmas, or foul-smelling air. Eventually, in the 1880s, medical science realized invisible microorganisms were the source of contagion, and that germs could be quietly passed from person to person. Unlike miasmas, which could be identified through smell, germs moved undetected through crowded cities. They were everywhere.

By the time the wife of painter Abbott Thayer succumbed to the disease in 1891, germ theory was widely accepted and would have been familiar to the artist, who was the son of a physician and public health expert. Fearing his three young children would be next, he sought out a “healthy” environment – a place with plenty of fresh air and surrounded by nature, where the family could eat nutritious meals, roam freely outdoors and get plenty of rest.

The Thayers weren’t the only family looking for therapeutic settings. The 1870s marked the start of the sanatorium movement, in which individuals who had tuberculosis, or thought they might, were able to steel themselves against the illness in medically supervised, open-air compounds often near the mountains, desert or the sea. At the time, tuberculosis was the cause of roughly one in seven deaths in the U.S.

The life Thayer created for him and his children in Dublin, New Hampshire, was modeled on this type of facility. Their home, at the base of Mount Monadnock, gave the family ample opportunities to be immersed in fresh mountain air, which was then thought to be the “purest” type of air.

On a typical day, Thayer spent his morning painting and then climbed Monadnock or took long trail walks with his family. These outdoor activities encouraged the kind of deep breathing believed to free toxins from contaminated lungs.

The Thayers also slept outdoors in individualized lean-tos – a three-sided shelter – that allowed them to breathe fresh air throughout the night. Thayer also invented a “breath catcher” – a device worn around the nose and mouth, not unlike the protective masks of today – which prevented the body’s “noxious exhalations” from freezing onto bedding at night, according to the thinking of the time. He also wore a special kind of wool underwear marketed for its protective qualities against disease in a further attempt to avoid germs.

While Thayer was working to protect the health of his family, his art underwent a shift.

Early in his career, Thayer mostly painted landscapes and portraits. But following the illness of his wife Kate, Thayer turned his own children – Mary, Gerald and Gladys – into the primary subjects of his work.

In the first of these, “Angel,” he painted his eldest child Mary as a heavenly creature, whose pale, chalky skin – underscored by her white robe and wings – conveys a fragility evoking the effects of tuberculosis.

The painting brings together the contradiction of a healthy daughter and sickly mother, collapsing the promise of wholesome youth and the fear of bodily disintegration. 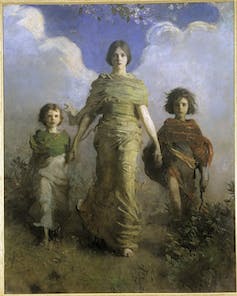 In “A Virgin of 1892–93,” Thayer depicted all three children standing outside. The clouds, which emerge from Mary’s shoulders as wings, allude to Thayer’s earlier depiction of her in “Angel” and thus to her role as a stand-in for his late wife.

Given the way in which Kate’s illness focused the family’s attention on nature and health, it seems significant, too, that the children, shown barefoot and windswept, walk vigorously and purposefully. Their classical clothing pays tribute to the ancient Greeks, celebrated in Thayer’s time for their commitment to physical fitness and outdoor living.

Immersed in a therapeutic environment while perhaps on one of their treks up Monadnock, Thayer’s children embody the life their father embraced. They become models of healthy outdoor living in an era of contagious disease.

The image may look antiquated, but it resonates today.

Both tuberculosis and COVID-19 target the lungs. Symptoms for both diseases include shortness of breath and coughing. There was no effective way to treat tuberculosis until the development of streptomycin in the 1940s, so prevention and perseverance during Thayer’s time – as with COVID-19 – often involved good hygiene and healthy living. Like Mary, Gerald and Gladys, we are still taking walks in nature in an effort to escape the psychological and physical limitations of quarantine.

Today, filling our lungs with fresh air remains a reassuring sign of health – just as it did more than a century ago.

Elizabeth Lee has received funding for this research from the Smithsonian American Art Museum and the Freer Gallery of Art.