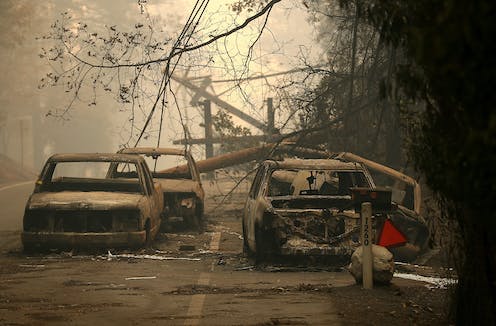 The 2018 Camp Fire in Paradise and Butte County, California was the deadliest and most destructive fire in California’s history. It took 86 lives and destroyed more than 18,000 structures in a matter of hours.

Almost two years later, only a fraction of the area’s 40,000-plus population has returned. This disaster followed the 2017 Tubbs Fire, which killed 22 people in California’s Sonoma and Napa counties.

After both fires, drinking water tests revealed a plethora of acutely toxic and carcinogenic pollutants. Water inside homes was not safe to use, or even to treat. Water pipes buried underground and inside of buildings were extensively contaminated.

We are environmentalengineers who help communities affected by disasters, and supported responses to both fires. As we conclude in a recently published study of burned areas, communities need to upgrade building codes to keep wildfires from causing this kind of widespread contamination of drinking water systems. 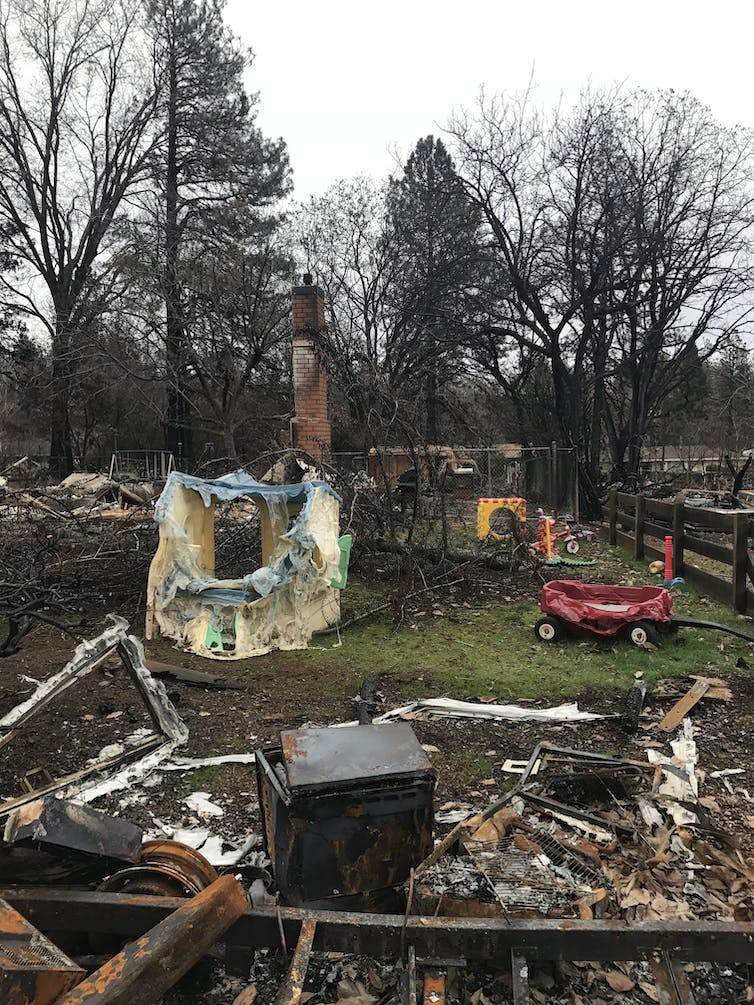 Both the Tubbs and Camp fires destroyed fire hydrants, water pipes and meter boxes. Water leaks and ruptured hydrants were common. The Camp Fire inferno spread at a speed of one football field per second, chasing everyone – including water system operators – out of town. 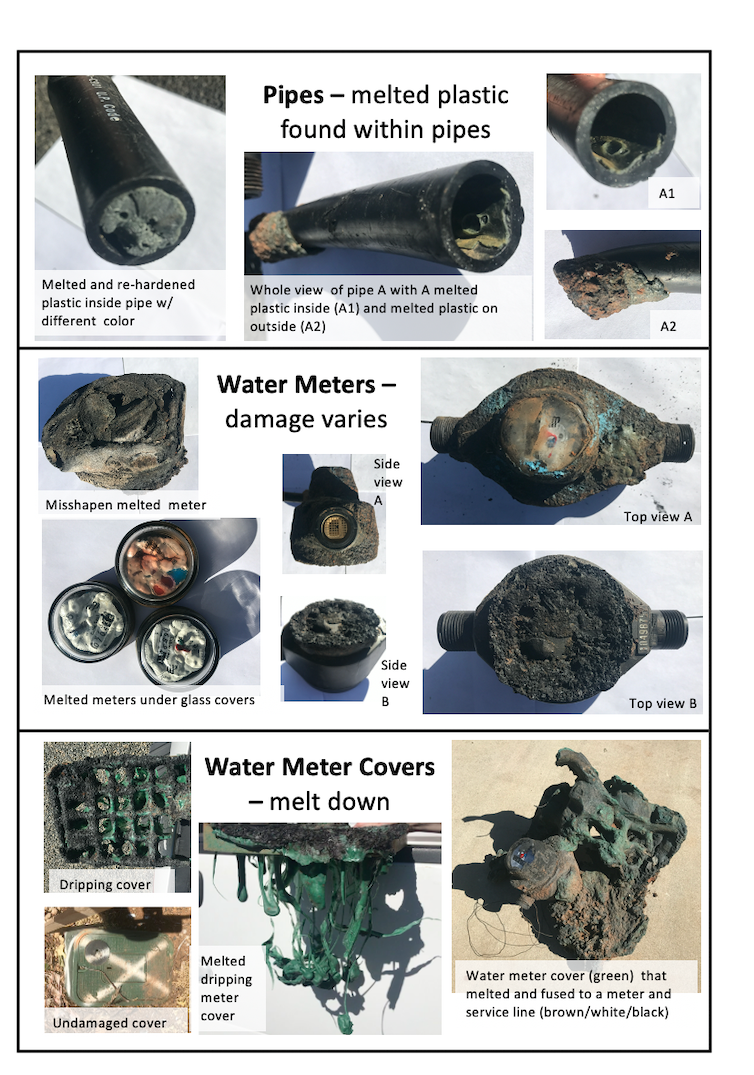 Firefighting can accelerate the spread of contamination. As emergency workers draw hydrant water, they spread contaminated water through the water pipe network.

Metal, concrete and plastic pipes can become contaminated. Many plastics take up these chemicals like sponges. As clean water later passes through the pipes, the toxic substances leach out, rendering the water unsafe.

In the Tubbs and Camp fires, chemicals in the air may have also been sucked into hydrants as water pipes lost pressure. Some water system plastics decomposed and leached chemicals directly into water. Toxic chemicals then spread throughout pipe networks and into buildings.

Limited water testing by state and local agencies showed benzene and naphthalene were present at levels that could cause immediate harm. These, as well as methylene chloride, styrene, toluene and vinyl chloride exceeded longer-term regulated exposure limits. Many of these chemicals cause cancer. All can cause vomiting, diarrhea and nausea after short-term high concentration exposure.

Anyone who drinks the water containing these substances could be harmed. And simply running a faucet could cause chemicals to enter the air. Hot showers and boiling water would vaporize the chemicals and increase the dose a person breathed in. Some of these substances can also be absorbed through the skin.

Benzene was found at concentrations of 40,000 parts per billion (ppb) in drinking water after the Tubbs Fire and at more than 2,217 ppb after the Camp Fire. According to the California Office of Environmental Health Hazard Assessment, children exposed to benzene for a single day can suffer harm at levels as low as 26 ppb.

The U.S. Environmental Protection Agency recommends limiting children’s short-term acute exposure to 200 ppb, and long-term exposure to less than 5 ppb. The EPA regulatory level for what constitutes a hazardous waste is 500 ppb.

In early 2019, California conducted contaminated water testing on humans by taking contaminated water from the Paradise Irrigation District and asking persons to smell it. The state found that even when people smelled contaminated water that had less than 200 ppb benzene, at least one person reported nausea and throat irritation. The test also showed that water contained a variety of other benzene-like compounds that first responders had not sampled for.

The officials who carried out this small-scale test did not appear to realize the significance of what they had done, until we asked whether they had had their action approved in advance by an institutional review board. In response, they asserted that such a review was not needed.

In our view, this episode is telling for two reasons. First, one subject reported an adverse health effect after being exposed to water that contained benzene at a level below the EPA’s recommended one-day limit for children. Second, doing this kind of test without proper oversight suggests that officials greatly underestimated the potential for serious contamination of local water supplies and public harm. After the Camp Fire, together with the EPA, we estimated that some plastic pipes needed more than 280 days of flushing to make them safe again. 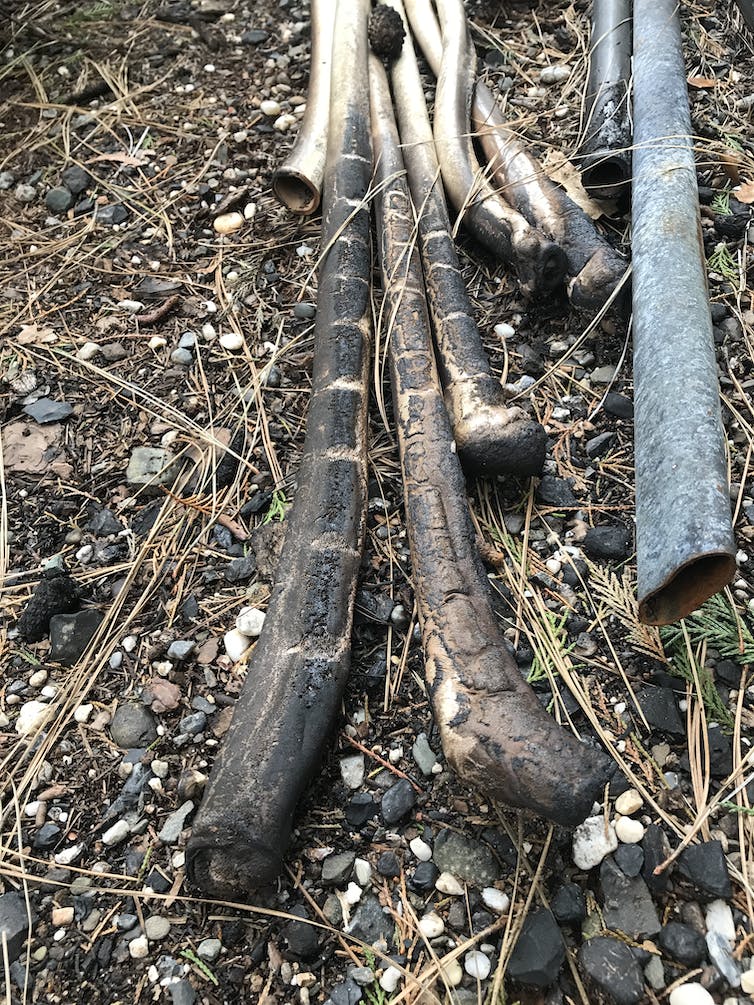 Plastic pipes can be damaged by heat and fire contact.Andrew Whelton, Purdue University

Our research underscores that community building codes are inadequate to prevent wildfire-caused pollution of drinking water and homes.

Installing one-way valves, called backflow prevention devices, at each water meter can prevent contamination rushing out of the damaged building from flowing into the larger buried pipe network.

Adopting codes that required builders to install fire-resistant meter boxes and place them farther from vegetation would help prevent infrastructure from burning so readily in wildfires. Concrete meter boxes and water meters with minimal plastic components would be less likely to ignite. Some plastics may be practically impossible to make safe again, since all types are susceptible to fire and heat.

Benzene contamination in the water supply slowed rebuilding efforts in Paradise, Calif., after the Camp Fire.

Under no circumstance should people be told to smell the water to determine its safety, as was recommended for months after the Camp Fire. Many chemicals have no odor when they are harmful. Only testing can determine safety.

Ordering people to boil their water will not make it safe if it contains toxic chemicals that enter the air. Boiling just transmits those substances into the air faster. “Do not use” orders can keep people safe until agencies can test the water. Before such advisories are lifted or modified, regulators should be required to carry out a full chemical screen of the water systems. Yet, disaster after disaster, government agencies have failed to take this step.

Buildings should be tested to find contamination. Home drinking water quality can differ from room to room, so reliable testing should sample both cold and hot water at many locations within each building.

While infrastructure is being repaired, survivors need a safe water supply. Water treatment devices sold for home use, such as refrigerator and faucet water filters, are not approved for extremely contaminated water, although product sales representatives and government officials may mistakenly think the devices can be used for that purpose.

To avoid this kind of confusion, external technical experts should be called in assist local public health departments, which can quickly become overwhelmed after disasters.

The damage that the Tubbs and Camp fires caused to local water systems was preventable. We believe that urban and rural communities, as well as state legislatures, should establish codes and lists of authorized construction materials for high-risk areas. They also should establish rapid methods to assess health, prepare for water testing and decontamination, and set aside emergency water supplies.

Wildfires are coming to urban areas. Protecting drinking water systems, buried underground or in buildings, is one thing communities can do to prepare for that reality.