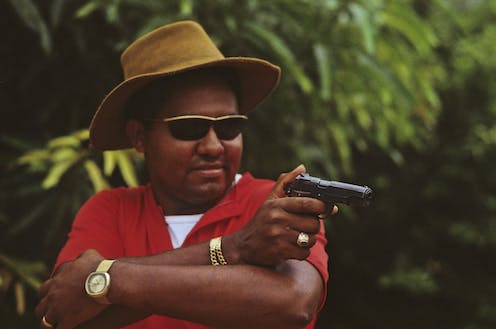 A marijuana trafficker practicing his aim in the Guajira, epicenter of Colombia's first drug boom, in 1979.Romano Cagnoni/Getty Images

This debunks the popular notion of Escobar as the pioneer of Colombian drug trafficking. Rather, it was some of Colombia’s most marginalized people who changed the course of their nation.

Back in the 1970s, peasant farmers from the Sierra Nevada de Santa Marta – a remote and mountainous region of Colombia’s Caribbean coast – began shifting from banana, cotton and coffee production to marijuana cultivation. When this population again pivoted to growing coca leaf for processing into cocaine in the 1980s, they set Colombia on a course to become the illicit drug capital of the Americas.

This research upends other old tropes about the drug trade, including the idea that it’s inherently violent.

My research also disproves the long-held academic consensus that illegal drug markets emerge in remote areas where the state has insufficient presence.

I find Colombia’s marijuana boom was actually an unintended consequence of state-led efforts to economically develop Colombia. Throughout the 20th century, Colombia worked to build its banana export sector, create a cotton belt to supply Colombian textile factories and to redistribute land. By the 1970s, Colombia was expanding international trade, particularly with the U.S.

These changes made some rural Colombians rich but, my research shows, impoverished peasant farmers in the Sierra Nevada de Santa Marta. People who’d grown legal commodity crops saw opportunity in exporting an illegal one to the United States: marijuana. 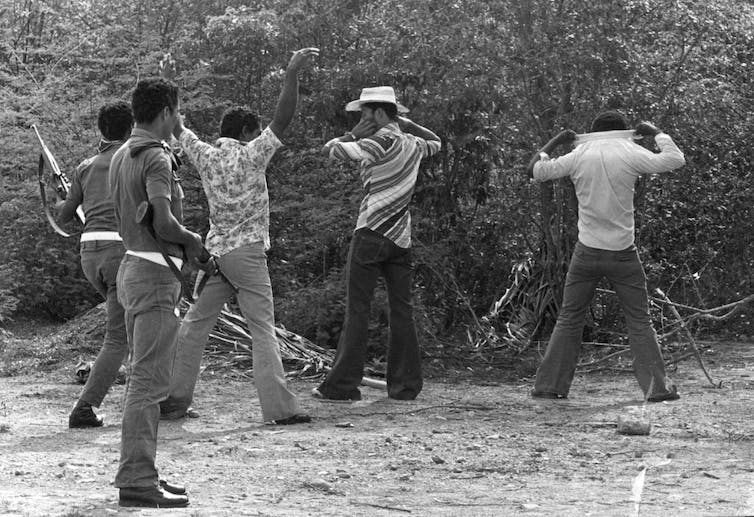 My book recounts how and why people in northern Colombia used their farming experience to grow and export marijuana. But it doesn’t detail their next transition, from marijuana to cocaine.

In southern Colombia, academics have documented how Pablo Escobar’s generation of traffickers financed new settlers to grow coca leaf, the base ingredient in cocaine, in the 1980s. We just don’t know how cocaine simultaneously supplanted marijuana as the staple drug crop of the peasant economy up north.

How I do my work

This began as a personal quest to understand the country of my childhood. My father is from the Sierra Nevada de Santa Marta, where marijuana once boomed.

Some of my research was archival, conducted in Colombia and the U.S. But much of it was done on the ground. I began collecting testimonials in northern Colombia is the early 2000s, during Colombia’s 52-year armed conflict. Paramilitary forces controlled the area. The war ended in 2016. But armed groups, including cartels, still operate there.

To stay safe while studying an industry that uses cash and violence to keep its affairs clandestine, I relied on friends and family, who helped me establish contacts and identify information sources. I also kept my questions focused on the defunct marijuana business – not the active cocaine trade.

This focus helped me avoid reproducing what historian Luis Astorga calls “the mythology of the narcotrafficker.” There are no Pablo Escobars in my book – just everyday Colombians who seized on their country’s growing commercial ties to the world’s largest drug market – the United States – to launch a global business.

Lina Britto does not work for, consult, own shares in or receive funding from any company or organization that would benefit from this article, and has disclosed no relevant affiliations beyond their academic appointment.