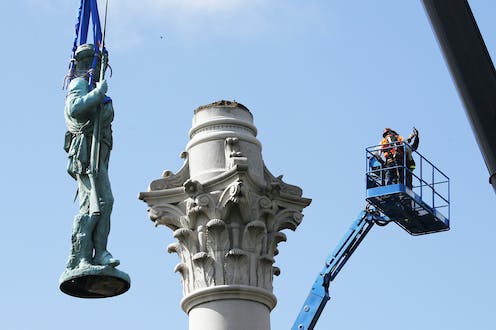 The U.S. is engaged in a national debate about how to deal with monuments to Confederate leaders, enslavers and other historical figures with complex, and often racist, histories.

As a scholar and practitioner of organizational communication, I often find myself in the middle of similarly protracted conflicts, working to get people with very different views to resolve their differences.

A key step in that process is for each person to confront the fact that even people who disagree with them are, in fact, fellow humans inherently worthy of dignity and respect.

Often, people seek clear decisions and quick action in response to disturbing feelings about the past. That may feel righteous in the moment but can be divisive, and often ignores complexities in a society’s cultural fabric.

My research and experience lead me to believe that the best way to resolve conflicts like the one about Confederate statues is to find shared values across a community divide.

Contested statues across the globe

Other countries have had similar debates to the one the U.S. now faces: Germany chose to remove Nazi statues, though not without protest. In Italy, communities have found ways to keep, or contextualize, the effigies of fascist leaders. South Africa chose to remove the images of apartheid leaders. Today, they are debating how to address the statues of colonists.

The discussion Americans are having is not new to history – but it is new here. Because of the nation’s complex culture of individualism, states’ rights and democratic ideals, each community will likely have to determine the fate of its own statues.

These statues represent people who played parts in American history. They also communicate communities’ current values and signal hopes for the future.

Demands to “take them down” – and the retorts to “leave them up” – serve only to polarize communities, rather than promoting understanding of each other’s history and helping to build a shared future together.

The rights and responsibilities of U.S. citizenship require people – everyone in the public, not just community leaders – to do more than just take a position and hold it without retreat. 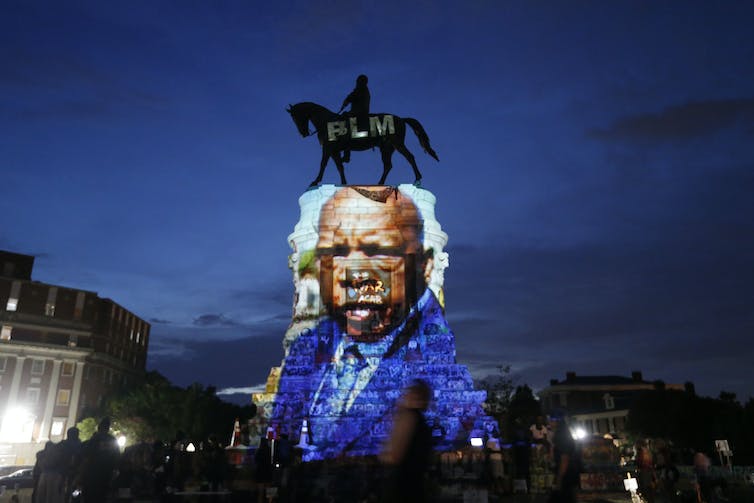 The Robert E. Lee statue in Richmond, Virginia, has been a canvas onto which protesters project images of Black heroes – in this case, a photo of late Georgia Congressman and civil rights pioneer John Lewis.AP Photo/Steve Helber

A key to bridging gaps in understanding is to become vulnerable, to listen and engage with the alternate view. The goal is not to persuade others or allow yourself to be convinced to change your mind, but rather to identify what everyone believes in common.

Here is a thought experiment I might propose for people who are involved in the debate, regardless of what side they are on. For some this may seem obvious, but it won’t for others – and that’s the value of the exercise: to give everyone of all perspectives a common ground from which to work toward resolving their conflict.

Imagine the statue is replaced with the likeness and name of a person who harmed you, or perhaps whom you like least in life. Every day when you leave your home, you will see that image, that symbol. It will forever look down on you.

Over time, the image of that person who did you wrong will become not only a fixed part of your history, but a shared story of your family, for generations.

Other community members may see that person as a hero, a sports star or a great politician. But all you can see is the person who violated you. How do you feel, under their image in marble or bronze? Should your great, great, great, great grandchildren have to walk beneath their gaze?

Those who want the statues to remain up see validation in what those statues represent. They therefore may feel vulnerable or scared when a statue they identify with is removed.

But once people begin to understand each other, they are more likely to believe, as I do, that in a free society, nobody should have to walk among monuments to their oppressors.

The process of mutual understanding is, in part, why I advocate for creative, nuanced, consensus-based approaches to addressing the nation’s Confederate and colonial monuments. People must ask themselves and each other how they wish to represent the full story of history, what values they wish to uphold as a community and what they wish to see for the nation’s future.

Michael Zirulnik does not work for, consult, own shares in or receive funding from any company or organization that would benefit from this article, and has disclosed no relevant affiliations beyond their academic appointment.