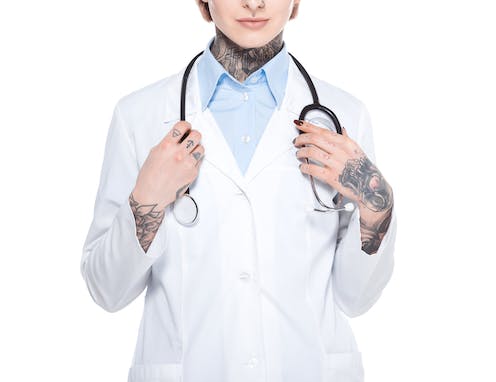 In the not-too-distant future, tattoos could become medical diagnostic devices as well as body art.LightFieldStudios/iStock via Getty Images

In the sci-fi novel “The Diamond Age” by Neal Stephenson, body art has evolved into “constantly shifting mediatronic tattoos” – in-skin displays powered by nanotech robopigments. In the 25 years since the novel was published, nanotechnology has had time to catch up, and the sci-fi vision of dynamic tattoos is starting to become a reality.

The first examples of color-changing nanotech tattoos have been developed over the past few years, and they’re not just for body art. They have a biomedical purpose. Imagine a tattoo that alerts you to a health problem signaled by a change in your biochemistry, or to radiation exposure that could be dangerous to your health.

You can’t walk into a doctor’s office and get a dynamic tattoo yet, but they are on the way. Early proof-of-concept studies provide convincing evidence that tattoos can be engineered, not only to change color, but to sense and convey biomedical information, including the onset of cancer.

In 2017, researchers tattooed pigskin, which had been removed from the pig, with molecular biosensors that use color to indicate sodium, glucose or pH levels in the skin’s fluids.

In 2019, a team of researchers expanded on that study to include protein sensing and developed smartphone readouts for the tattoos. This year, they also showed that electrolyte levels could be detected with fluorescent tattoo sensors.

In 2018, a team of biologists developed a tattoo made of engineered skin cells that darken when they sense an imbalance of calcium caused by certain cancers. They demonstrated the cancer-detecting tattoo in living mice.

My lab is looking at tech tattoos from a different angle. We are interested in sensing external harms, such as ultraviolet radiation. UV exposure in sunlight and tanning beds is the main risk factor for all types of skin cancer. Nonmelanoma skin cancers are the most common malignancies in the U.S., Australia and Europe.

To help address this problem, we developed an invisible tattoo ink that turns blue only in UV light, alerting you when your skin needs protection. The tattoo ink contains a UV-activated dye inside of a plastic nanocapsule less than a micron in diameter – or thousandth of a millimeter – about the same size as an ordinary tattoo pigment.

The nanocapsule is needed to make the color-changing tattoo particles large enough. If tattoo pigments are too small, the immune system rapidly clears them from the skin and the tattoo disappears. They are implanted using tattoo machines in the same way as regular tattoos, but they last for only several months before they start to degrade from UV exposure and other natural processes and fade, requiring a “booster” tattoo.

I served as the first human test subject for these tattoos. I created “solar freckles” on my forearm – invisible spots that turned blue under UV exposure and reminded me when to wear sunscreen. My lab is also working on invisible UV-protective tattoos that would absorb UV light penetrating through the skin, like a long-lasting sunscreen just below the surface. We’re also working on “thermometer” tattoos using temperature-sensitive inks. Ultimately, we believe tattoo inks could be used to prevent and diagnose disease.

In this TEDx talk, the author demonstrates the UV-detecting tattoo.

Temporary transfer tattoos are also undergoing a high-tech revolution. Wearable electronic tattoos that can sense electrophysiological signals like heart rate and brain activity or monitor hydration and glucose levels from sweat are under development. They can even be used for controlling mobile devices, for example shuffling a music playlist at the touch of a tattoo, or for luminescent body art that lights up the skin.

The advantage of these wearable tattoos is that they can use battery-powered electronics. The disadvantage is that they are much less permanent and comfortable than traditional tattoos. Likewise, electronic devices that go underneath the skin are being developed by scientists, designers and biohackers alike, but they require invasive surgical procedures for implantation.

Tattoos injected into the skin offer the best of both worlds: minimally invasive, yet permanent and comfortable. New needle-free tattooing methods that fire microscopic ink droplets into the skin are now in development. Once perfected they will make tattooing quicker and less painful.

Ready for everyday use?

The color-changing tattoos in development are also going to open the door to a new kind of dynamic body art. Now that tattoo colors can be changed by an electromagnetic signal, you’ll soon be able to “program” your tattoo’s design, or switch it on and off. You can proudly display your neck tattoo at the motorcycle rally and still have clear skin in the courtroom.

As researchers develop dynamic tattoos, they’ll need to study the safety of the high-tech inks. As it is, little is known about the safety of the more than 100 different pigments used in normal tattoo inks. The U.S. Food and Drug Administration has not exercised regulatory authority over tattoo pigments, citing other competing public health priorities and a lack of evidence of safety problems with the pigments. So U.S. manufacturers can put whatever they want in tattoo inks and sell them without FDA approval.

So far, there is no evidence that tattoos cause cancer, and one study even found that black tattoos protect against UV-induced skin cancer. Still, many tattoo inks contain or degrade into substances that are known to be hazardous, and health complications including infection, allergy and granuloma have been found in about 2% of tattoos. More research is needed to understand the long-term effects of nano- and microimplants in the skin in general.

A wave of high-tech tattoos is slowly upwelling, and it will probably keep rising for the foreseeable future. When it arrives, you can decide to surf or watch from the beach. If you do climb on board, you’ll be able to check your body temperature or UV exposure by simply glancing at one of your tattoos.

Carson J Bruns does not work for, consult, own shares in or receive funding from any company or organization that would benefit from this article, and has disclosed no relevant affiliations beyond their academic appointment.