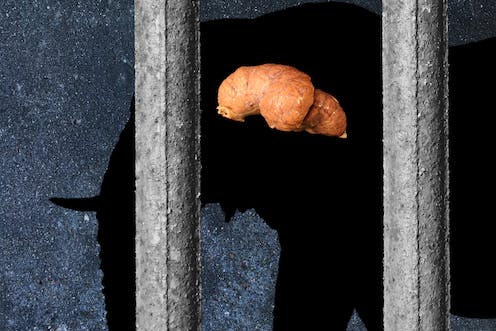 Hanako, a female Asian elephant, lived in a tiny concrete enclosure at Japan’s Inokashira Park Zoo for more than 60 years, often in chains, with no stimulation. In the wild, elephants live in herds, with close family ties. Hanako was solitary for the last decade of her life.

Kiska, a young female orca, was captured in 1978 off the Iceland coast and taken to Marineland Canada, an aquarium and amusement park. Orcas are social animals that live in family pods with up to 40 members, but Kiska has lived alone in a small tank since 2011. Each of her five calves died. To combat stress and boredom, she swims in slow, endless circles and has gnawed her teeth to the pulp on her concrete pool.

Unfortunately, these are common conditions for many large, captive mammals in the “entertainment” industry. In decades of studying the brains of humans, African elephants, humpback whales and other large mammals, I’ve noted the organ’s great sensitivity to the environment, including serious impacts on its structure and function from living in captivity. 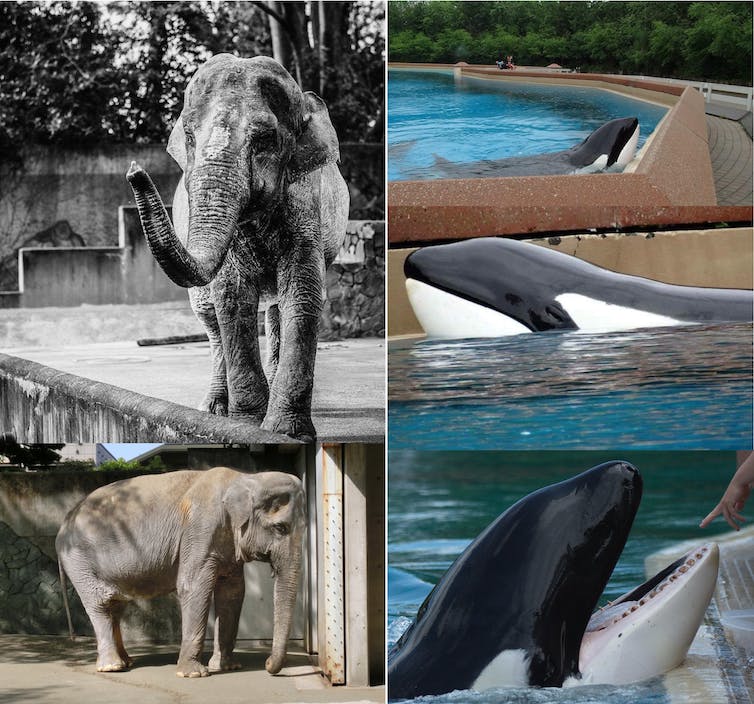 It is easy to observe the overall health and psychological consequences of life in captivity for these animals. Many captive elephants suffer from arthritis, obesity or skin problems. Both elephants and orcas often have severe dental problems. Captive orcas are plagued by pneumonia, kidney disease, gastrointestinal illnesses and infections.

Many animals try to cope with captivity by adopting abnormal behaviors. Some develop “stereotypies,” which are repetitive, purposeless habits such as constantly bobbing their heads, swaying incessantly or chewing on the bars of their cages. Others, especially big cats, pace their enclosures. Elephants rub or break their tusks.

Neuroscientific research indicates that living in an impoverished, stressful captive environment physically damages the brain. These changes have been documented in many species, including rodents, rabbits, cats and humans.

Although researchers have directly studied some animal brains, most of what we know comes from observing animal behavior, analyzing stress hormone levels in the blood and applying knowledge gained from a half-century of neuroscience research. Laboratory research also suggests that mammals in a zoo or aquarium have compromised brain function. 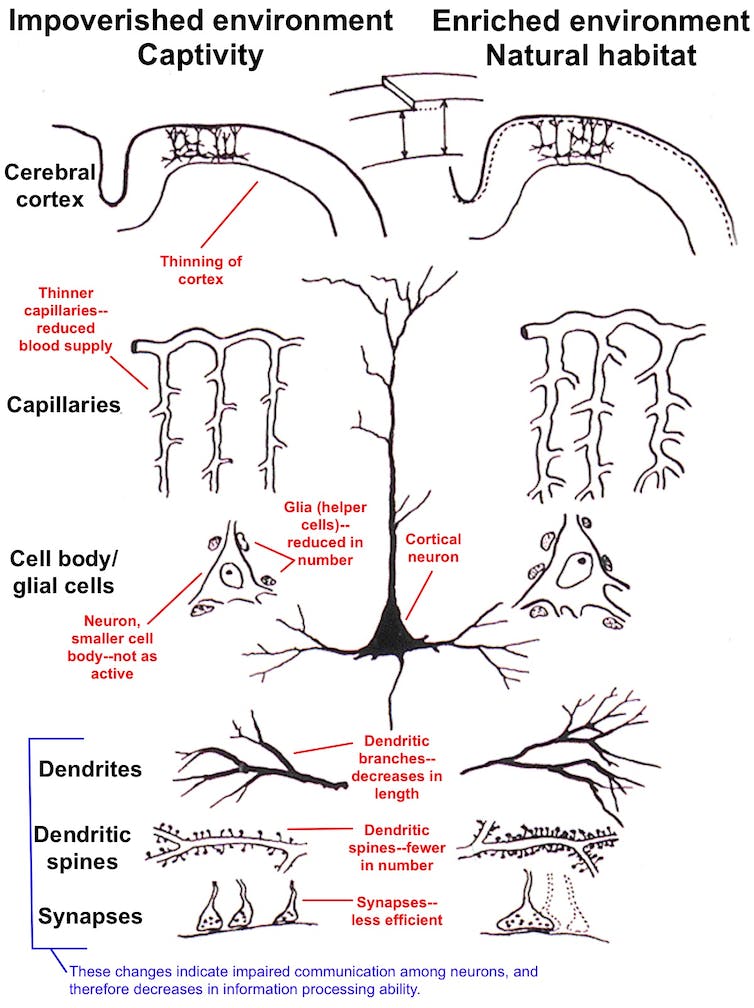 This illustration shows differences in the brain’s cerebral cortex in animals held in impoverished (captive) and enriched (natural) environments. Impoverishment results in thinning of the cortex, a decreased blood supply, less support for neurons and decreased connectivity among neurons.Arnold B. Scheibel, CC BY-ND

Subsisting in confined, barren quarters that lack intellectual stimulation or appropriate social contact seems to thin the cerebral cortex – the part of the brain involved in voluntary movement and higher cognitive function, including memory, planning and decision-making.

There are other consequences. Capillaries shrink, depriving the brain of the oxygen-rich blood it needs to survive. Neurons become smaller, and their dendrites – the branches that form connections with other neurons – become less complex, impairing communication within the brain. As a result, the cortical neurons in captive animals process information less efficiently than those living in enriched, more natural environments. 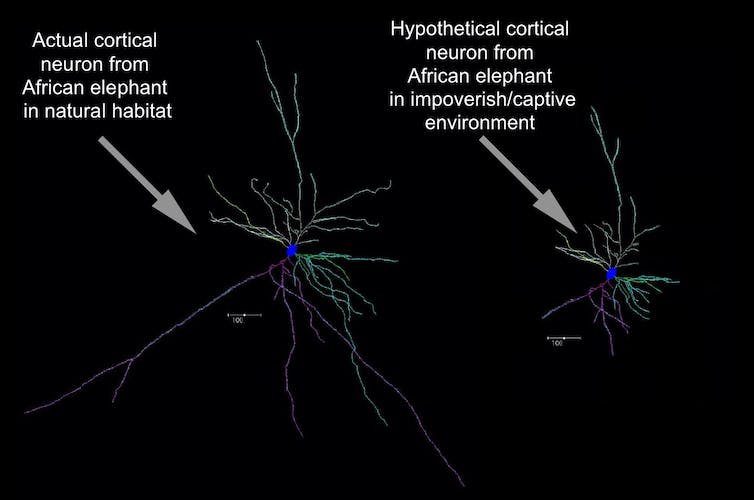 An actual cortical neuron in a wild African elephant living in its natural habitat compared with a hypothesized cortical neuron from a captive elephant.Bob Jacobs, CC BY-ND

Brain health is also affected by living in small quarters that don’t allow for needed exercise. Physical activity increases the flow of blood to the brain, which requires large amounts of oxygen. Exercise increases the production of new connections and enhances cognitive abilities.

In their native habits these animals must move to survive, covering great distances to forage or find a mate. Elephants typically travel anywhere from 15 to 120 miles per day. In a zoo, they average three miles daily, often walking back and forth in small enclosures. One free orca studied in Canada swam up to 156 miles a day; meanwhile, an average orca tank is about 10,000 times smaller than its natural home range.

Living in enclosures that restrict or prevent normal behavior creates chronic frustration and boredom. In the wild, an animal’s stress-response system helps it escape from danger. But captivity traps animals with almost no control over their environment.

These situations foster learned helplessness, negatively impacting the hippocampus, which handles memory functions, and the amygdala, which processes emotions. Prolonged stress elevates stress hormones and damages or even kills neurons in both brain regions. It also disrupts the delicate balance of serotonin, a neurotransmitter that stabilizes mood, among other functions.

In humans, deprivation can trigger psychiatric issues, including depression, anxiety, mood disorders or post-traumatic stress disorder. Elephants, orcas and other animals with large brains are likely to react in similar ways to life in a severely stressful environment.

Captivity can damage the brain’s complex circuitry, including the basal ganglia. This group of neurons communicates with the cerebral cortex along two networks: a direct pathway that enhances movement and behavior, and an indirect pathway that inhibits them.

The repetitive, stereotypic behaviors that many animals adopt in captivity are caused by an imbalance of two neurotransmitters, dopamine and serotonin. This impairs the indirect pathway’s ability to modulate movement, a condition documented in species from chickens, cows, sheep and horses to primates and big cats. 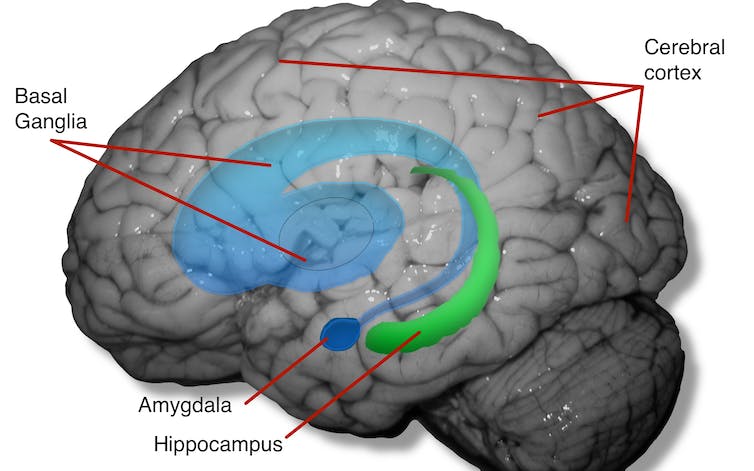 The cerebral cortex, hippocampus and amygdala are physically altered by captivity, along with brain circuitry that involves the basal ganglia.Bob Jacobs, CC BY-ND

Evolution has constructed animal brains to be exquisitely responsive to their environment. Those reactions can affect neural function by turning different genes on or off. Living in inappropriate or abusive circumstance alters biochemical processes: It disrupts the synthesis of proteins that build connections between brain cells and the neurotransmitters that facilitate communication among them.

There is strong evidence that enrichment, social contact and appropriate space in more natural habitats are necessary for long-lived animals with large brains such as elephants and cetaceans. Better conditions reduce disturbing sterotypical behaviors, improve connections in the brain, and trigger neurochemical changes that enhance learning and memory.

Some people defend keeping animals in captivity, arguing that it helps conserve endangered species or offers educational benefits for visitors to zoos and aquariums. These justifications are questionable, particularly for large mammals. As my own research and work by many other scientists shows, caging large mammals and putting them on display is undeniably cruel from a neural perspective. It causes brain damage.

Public perceptions of captivity are slowly changing, as shown by the reaction to the documentary “Blackfish.” For animals that cannot be free, there are well-designed sanctuaries. Several already exist for elephants and other large mammals in Tennessee, Brazil and Northern California. Others are being developed for large cetaceans.

Perhaps it is not too late for Kiska.

Dr. Lori Marino, president of the Whale Sanctuary Project and a former senior lecturer at Emory University, contributed to this article.

Bob Jacobs does not work for, consult, own shares in or receive funding from any company or organization that would benefit from this article, and has disclosed no relevant affiliations beyond their academic appointment.