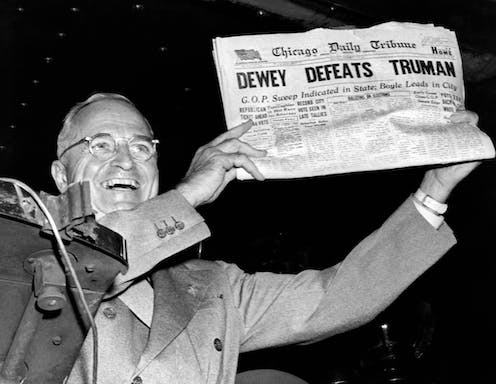 The question looms in nearly every U.S. presidential election, even in this year’s race: Could the polls be wrong? If they are, they likely will err in unique fashion. The history of election polling says as much.

That history tells of no greater polling surprise than what happened in 1948, when President Harry Truman defied the polls, the pundits and the press to defeat Thomas E. Dewey, his heavily favored Republican foe.

Pollsters were certain Truman had no chance. One of them, Elmo Roper, was so confident of Dewey’s victory that he announced two months before the election he would release no further survey data unless a political miracle intervened.

Rival pollsters George Gallup and Archibald Crossley largely completed their poll-taking by mid-October – and missed a decisive shift in support to Truman in the campaign’s closing days.

As I point out in my latest book, “Lost in a Gallup: Polling Failure in U.S. Presidential Elections,” the misfire of 1948 was exceptional. And that describes most polling failures in presidential elections: They tend to be exceptional, unlike previous polling errors. 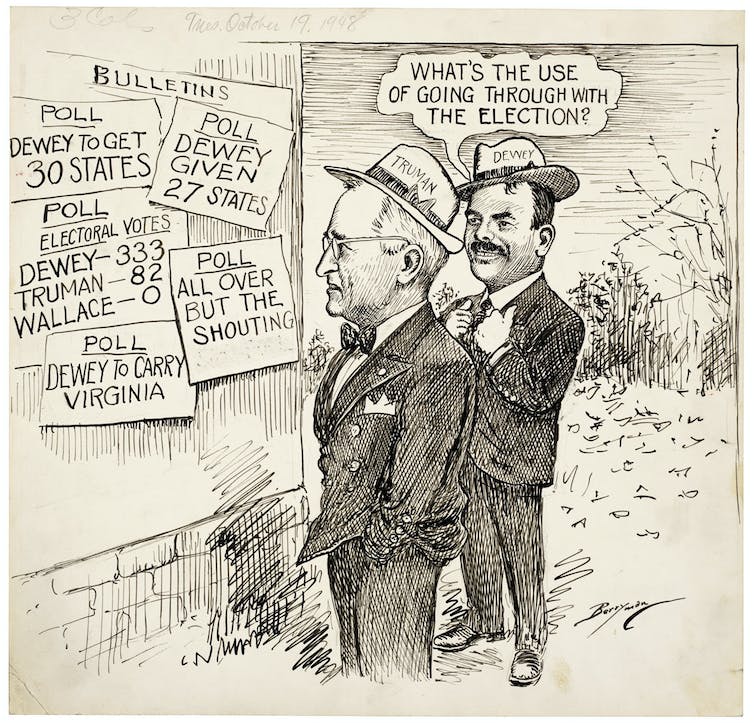 A cartoon published two weeks before the 1948 election, in which Dewey was projected to win by a large margin.Clifford Kennedy Berryman, Artist/National Archives, Records of the U.S. Senate, 1789 - 2015

When the polls go wrong, they almost always do so in some unanticipated way. Errors spring from no single template.

This variety helps explain why polling failure is so unpredictable and so jarring. The epic miscall of 1948 has never been duplicated in U.S. presidential elections – although the shock of Truman’s victory may have been rivaled by the profound surprise that accompanied Donald Trump’s win in 2016.

Trump’s victory represented polling failure of another kind: Polls in 2016 were not so much in error nationally as they were in states such as Wisconsin, Pennsylvania and Michigan.

If Hillary Clinton had carried those states, as polls had indicated, she would have won the electoral votes to become president. But errors in state-level polls upset national expectations, in part because those polls tended to include too few white voters without college degrees, a key Trump constituency in 2016 and this year. 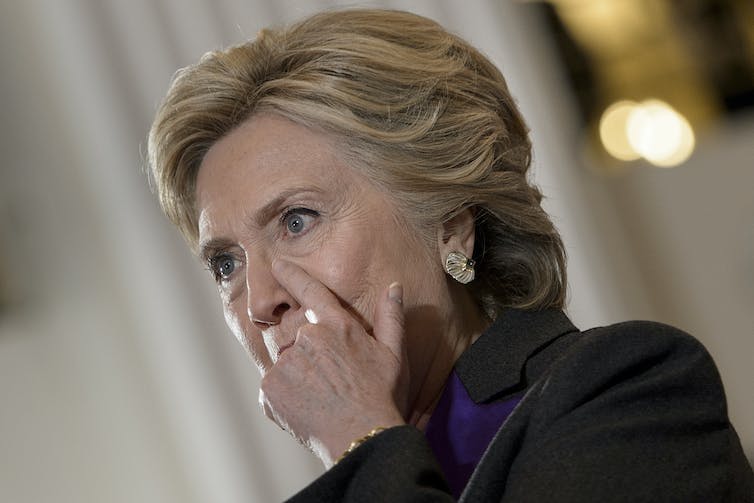 Hillary Clinton’s loss to Donald Trump in 2016 was unexpected and reflected that polls in 2016 were not so much in error nationally as they were in key states.Brendan Smialowski / AFP/Getty Images

Voters changing or making up their minds late in the campaign led in 1980 to another type of polling failure – the unforeseen landslide. Polls that year mostly signaled a close race between President Jimmy Carter and Ronald Reagan. At campaign’s end, the race seemed too close to call.

For logistical reasons, poll-taking may not be able to catch up with late-breaking revelations that disrupt the public’s perception of a campaign’s dynamic, such as the disclosures before the 2000 election about George W. Bush’s drunken-driving conviction.

In 1976, Bush was arrested in Maine and pleaded guilty to a DUI violation that he had never publicly revealed. A young television reporter in Maine pursued a tip in 2000 and reported the details five days before the election.

As the 2000 campaign closed, most polls signaled Bush was ahead by a few percentage points.

In the end, Democrat Al Gore won the popular vote but lost the Electoral College in the disputed outcome of voting in Florida. Disclosures about Bush’s DUI conviction may have been enough to cost him a popular-vote victory.

The 2000 outcome represented another variety of polling failure – pointing to the wrong winner in a close race.

It’s a class of failure that emerged 40 years earlier, in the election between John F. Kennedy and Richard M. Nixon. Roper’s final pre-election poll suggested a two-point win for Nixon.

As I note in “Lost in a Gallup,” after Kennedy’s razor-thin victory had become clear, Roper’s son and business partner, Burns, sent a memorandum to the company’s staff, declaring: “I’m not about to take any malarkey about having ‘picked the wrong man.’”

But that’s what the Roper poll had done. It pointed to the wrong winner. 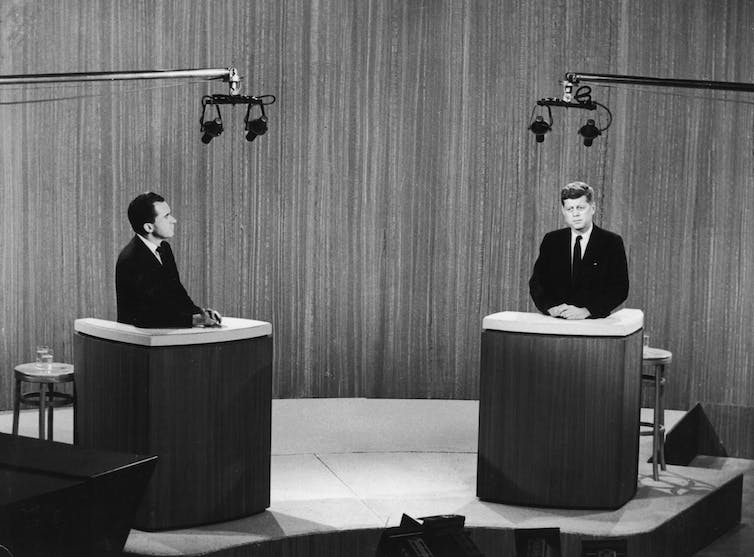 Another type of polling failure is that of the venerable pollster who is singularly and astonishingly in error – as was the Literary Digest in its infamous mail-in survey of 1936.

The Digest was a weekly magazine whose massive mail-in polls had identified the winner in each of the three presidential elections since 1924. Some newspapers acclaimed the Digest’s mass-polling technique for its “uncanny” accuracy.

In 1936, the Digest employed the same methodology that had served it so well. After sending 10 million postcard ballots and tabulating the 2.3 million returned from around the country, the Digest reported that Republican Alf Landon was bound for a comfortable victory over President Franklin D. Roosevelt.

Landon ended up carrying two states – Maine and Vermont – and lost the popular vote by 24 percentage points. Roosevelt’s victory was one of the most lopsided in presidential election history.

That also was the year Gallup, Crossley and Elmo Roper initiated their election polls, which relied on smaller samples than the Digest. With varying degrees of accuracy, all three newcomers in 1936 signaled Roosevelt’s victory.

The Digest’s debacle offers an enduring reminder that the roots of polling failure run deep. The stunning miscall occurred at the dawn of modern survey research and introduced a nagging sense about polling’s potential to mislead.

After all, if the great election oracle of its time could err so spectacularly, why would other polls be immune to failure?

The answer: They weren’t, and aren’t, immune.

W. Joseph Campbell does not work for, consult, own shares in or receive funding from any company or organization that would benefit from this article, and has disclosed no relevant affiliations beyond their academic appointment.