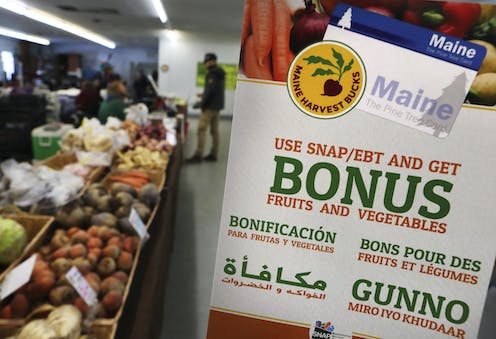 Some states make it possible to use SNAP benefits at farmers markets.AP Photo/Robert F. Bukaty 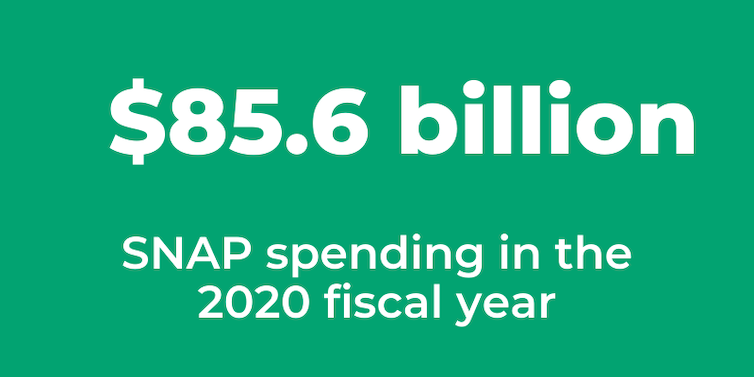 The government spent a record US$85.6 billion on the Supplemental Nutrition Assistance Program in the fiscal year ending in September. This sum, included in an October Treasury Department report, was about 35% higher than the $63.5 billion the federal government spent in 2019.

Spending on this state-administered program, which helps struggling families put food on the table, typically rises and falls in tandem with unemployment and poverty. Along with unemployment insurance, SNAP is one of the most responsive programs in a recession. The most vulnerable families can get benefits within seven days of applying.

Before the coronavirus pandemic, SNAP spending had been steadily declining since a 2013 peak of nearly $80 billion following the Great Recession. But as the COVID-19-triggered economic crisis hit, monthly spending more than doubled, from $4.9 billion in February to $10.6 billion in June, according to Treasury Department data.

The jump came from two factors. First, more people are getting benefits. Second, roughly 60% of the families who get them are eligible for more support than before.

Specifically, after the Families First Coronavirus Response Act relief package Congress passed in March 2020, the government temporarily offered the maximum benefit, typically given only to those with no income, to all families on SNAP. Following a 5.3% increase announced Oct. 1 in response to rising food costs, that maximum level stands at $680 a month for a family of four.

Despite this SNAP spending boost, lines at food banks have grown much longer during the pandemic.

To help both overwhelmed food banks and struggling farmers, the U.S. Department of Agriculture launched the Farmers to Families Food Box Program. The government had sent by mid-October 110 million boxes of fresh fruit, vegetables, dairy products and meat to food banks and other organizations assisting people facing economic hardship.

The USDA is spending about $4 billion to purchase the food. But the program has been criticized by lawmakers and anti-hunger groups as inefficient and poorly managed. Although food banks have appreciated the help, even people who run food banks see SNAP as the best way to help the hungry.

In fact, in researching the history of SNAP for an upcoming book, I found that the program long known as food stamps slowly replaced another program distributing surplus food to the needy in the 1960s. Government researchers found that giving families stamps to exchange for food in grocery stores was more efficient and effective.

In 2019, 92% of SNAP spending went directly to benefits. The program boosts the economy, leading to more consumer spending and jobs. SNAP also provides nine meals for every one meal supplied by Feeding America, the largest network of food banks.

Almost 2,500 organizations serving the poor are calling for increasing maximum SNAP benefits by 15%. This would help all families on SNAP – including the 40% with the lowest incomes who have not gotten additional help so far during the pandemic. The House passed relief legislation in May and October that called for this 15% increase. As of late October, the Senate had not taken this step even though food insecurity has grown substantially.

Tracy Roof does not work for, consult, own shares in or receive funding from any company or organization that would benefit from this article, and has disclosed no relevant affiliations beyond their academic appointment.