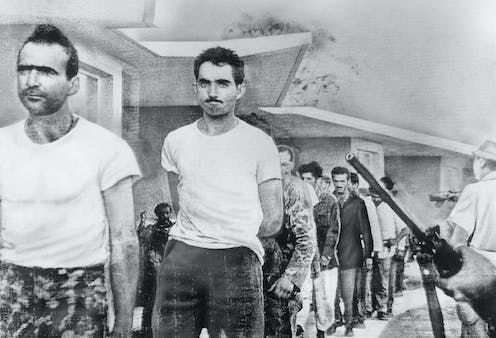 Bay of Pigs debacle: Watched by armed guards, grim-faced US-backed invaders are marched off to prison after their capture by Fidel Castro's forces.Bettmann via Getty Images

Sixty years ago, The New York Times is said to have muzzled itself in reporting about plans for the CIA-backed Bay of Pigs invasion, earning a lasting niche of dishonor in the history of American journalism.

The Bay of Pigs-New York Times suppression tale has been cited in books, newspapers, on cable news shows and elsewhere as a study in self-censorship and its consequences.

Had the Times resisted the requests of President John F. Kennedy, had it printed all it knew about the pending invasion of Cuba, the suppression tale goes, the ill-fated assault might have been scrapped and the U.S. spared a foreign policy debacle.

The suppression tale makes for a timeless lesson about the perils for news organizations in yielding to government pressure and withholding vital if sensitive information, ostensibly because of national security implications. When government officials invoke national security, publishing secret material becomes a thorny matter for news outlets.

Yet in the case of the Times and the Bay of Pigs, the object lesson is not relevant.

That’s because the suppression narrative is exaggerated. It’s a media-driven myth – one of many well-known tales about the news media which, under scrutiny, dissolve as false or fanciful. 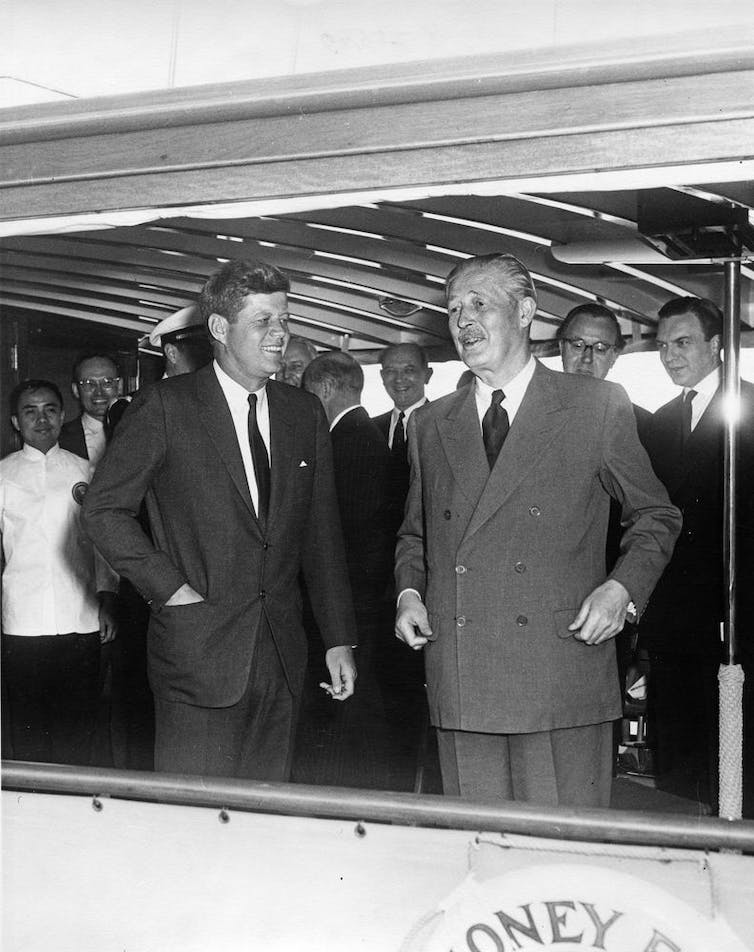 Kennedy and British Prime Minister Harold Macmillan were together at the time Kennedy was rumored to have called editors at The New York Times.JFK Presidential Library

As I discuss in “Getting It Wrong: Debunking the Greatest Myths in American Journalism,” the Times did not suppress reports about the approaching invasion, which was launched April 17, 1961, and failed to dislodge Cuban dictator Fidel Castro.

In fact, the Times reports about preparations for the assault were detailed and often prominently displayed on the front page. Readers could tell what was coming, if not always in specific detail.

Moreover, there is no evidence Kennedy knew in advance about the Times report published April 7, 1961, a front-page article about invasion preparations that lies at the heart of the suppression myth.

There is no evidence that Kennedy or anyone in his administration lobbied or persuaded the Times to hold back or significantly dilute that story, as many accounts have claimed.

The April 7 article was written by Tad Szulc, a veteran foreign correspondent who reported from Miami that an assault by CIA-trained Cuban rebels was imminent.

According to subsequent accounts by senior editors at the Times, references to imminence and the CIA were removed before the article was published.

They reasoned that “imminent” was more prediction than fact. The managing editor, Turner Catledge, later wrote that he “was hesitant to specify the CIA when we might not be able to document the charge.” The term “United States officials” was substituted. Both decisions were modest and judicious.

Dispute arose among Times editors internally about trimming to a single column the headline that accompanied Szulc’s story. A headline spanning four columns had been planned.

The size of a newspaper headline typically corresponds to an article’s relative significance. A four-column headline would have signaled “a story of exceptional importance,” former Times reporter and editor Harrison E. Salisbury noted in “Without Fear or Favor: The New York Times and Its Times,” an insider’s account. Four-column display was infrequent, although not unheard of, on the Times’ front pages of the early 1960s.

But without a reference to the invasion’s imminence, a four-column headline was difficult to justify. Even so, Szulc’s lengthy article received prominent placement at the top of the Times’ front page.

It’s highly unlikely that Kennedy made a private appeal to anyone at the Times on April 6, 1961, the day Szulc’s dispatch was filed, edited and readied for publication. White House logs show no telephone calls to Catledge or other senior Times executives on April 6, according to the John F. Kennedy Presidential Library in Boston.

One of reporter Tad Szulc’s stories for The New York Times before the Bay of Pigs invasion.Media Myth Alert, Author provided

The president spent the last half of the afternoon that day playing host to Harold Macmillan, the British prime minister, on a cruise aboard the presidential yacht down the Potomac River. It was nearly 6:30 p.m. when Kennedy returned to the White House.

That left scant opportunity for him to have called Times executives before the newspaper’s first edition went to press.

Salisbury’s “Without Fear or Favor” offers a detailed discussion about internal deliberations on Szulc’s article and his account is adamant.

“The government in April 1961,” Salisbury wrote, “did not … know that The Times was going to publish the Szulc story although it was aware that The Times and other newsmen were probing in Miami. Nor did President Kennedy telephone [senior Times officials] about the story. … The action which The Times took [in editing Szulc’s report] was on its own responsibility,” the result of internal discussions.

“Most important,” Salisbury added, “The Times had not killed Szulc’s story … The Times believed it was more important to publish than to withhold. Publish it did.”

The run-up to the Bay of Pigs was no one-off story. Indeed, the ongoing nature of the Times’ pre-invasion coverage is almost never noted when the suppression myth is told.

After publishing Szulc’s article, the Times expanded its reporting about the pending invasion. Its front page of April 9, 1961, for example, carried a story by Szulc that Cuban exile leaders were trying to reconcile their rivalries while “preparing a thrust” against Castro.

“The first assumption of the [leaders’] plans,” Szulc wrote, “is that an invasion by a ‘liberation army,’ now in the final stages of training in Central America and in Louisiana, will succeed with the aid of an internal uprising in Cuba.”

With that, Szulc broadly described the objectives of a mission that brought 1,400 armed exiles to landing beaches in southwest Cuba.

Their assault was crushed within three days.

W. Joseph Campbell does not work for, consult, own shares in or receive funding from any company or organization that would benefit from this article, and has disclosed no relevant affiliations beyond their academic appointment.