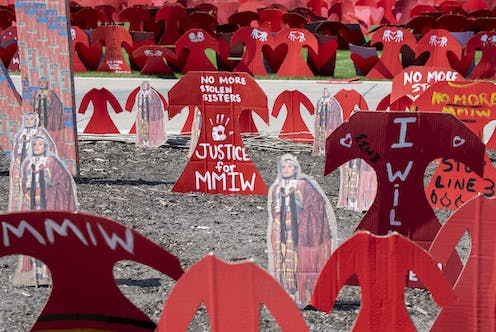 Native Americans are more than twice as likely to be victims of violent crime than the U.S. population as a whole.Michael Siluk/Universal Images Group via Getty Images

No one knows just how many Indigenous girls or women go missing each year.

There are estimates. In 2019, 8,162 Indigenous youth and 2,285 Indigenous adults were reported missing to the National Crime Information Center, or NCIC, out of a total of 609,275 cases. But crimes against Native individuals often go unreported, and with American Indian and Alaskan Native cases, race is sometimes ignored or misclassified as white.

I almost became part of statistics like these. As a child, I was attacked by a person who targeted and typically killed isolated rural children. I know firsthand that the threat of being attacked and “disappearing” is real. And as a scholar who studies tribal justice and has tried to draw attention to the problem of missing and murdered Indigenous people, I find the lack of reliable data particularly frustrating. It is hard to call media attention to the seriousness of an issue that cannot be clearly measured.

So how can researchers and Native communities convince the media to pay attention to missing Indigenous people? And how can they convince authorities to investigate these cases?

The Missing and Murdered Indigenous Women movement started in Canada with the first official gathering in 2015. MMIW is a loose coalition of groups throughout Canada and the U.S. that seeks to draw attention to the disproportionate violence experienced by Indigenous women.

After suffering massive historical trauma, including through forced relocation and forced assimilation, many Indigenous people do not trust authorities. As a result, they do not report the crimes that are taking place. Crimes that do not get reported typically do not get counted.

Problems of jurisdictional authority further complicate the issue of poor data. Even if a Native family decides to report a loved one missing, do they report it to federal, state, tribal or local authorities? Since tribal communities are often treated as sovereign nations, state or local authorities might not take action on the case. However, tribal authorities may lack the resources required for a missing person investigation. And, since the missing person is typically not somewhere on the reservation, tribal authorities may lack legal authority to conduct an off-reservation investigation or to arrest non-tribal individuals.

Finally, even if a missing person report does make its way to a law enforcement agency that can handle the case, if the missing person is a child, law enforcement agents can use their discretion to declare the person a runaway. If a child is officially classified as a runaway, there is no amber alert and typically no media coverage. The crucial window of time to locate the victim immediately following the crime is often lost.

U.S. attorneys declined to prosecute two-thirds of the Indian country sexual abuse and related cases referred to them between 2005 and 2009. This was partially due to jurisdictional disagreements between the FBI and the Bureau of Indian Affairs, and perhaps difficulty in obtaining evidence in violent crime cases as well as a perceived lack of victim credibility due to the interracial nature of many of the crimes. The fact that many crimes in Native communities are not even investigated makes that ratio even more striking.

I believe there are many factors, both historical and current, for the lack of attention paid by police and media to missing Indigenous people.

Historically, Indigenous people, like many people of color, were not thought of as fully human by the white colonizers. Tribal people were considered to be animalistic and heathen, and Indigenous women were, and still are, thought to be sexually promiscuous.

This feeling of superiority over another race led to a willingness by the colonizers to kill Indigenous people, force them into slavery, remove them from desired lands and later place their children in boarding schools where they were stripped of their language and culture and sometimes died.

In an 1886 speech, Theodore Roosevelt, who would go on to become U.S. president, said, “I don’t go so far as to think that the only good Indians are the dead Indians, but I believe nine out of every 10 are.” This historic dehumanization of Indigenous people is still evident today in violence against Native American people.

According to CDC data, Native Americans are also more likely to be killed by U.S. police than any other ethnic group group – and twice as likely as white Americans. 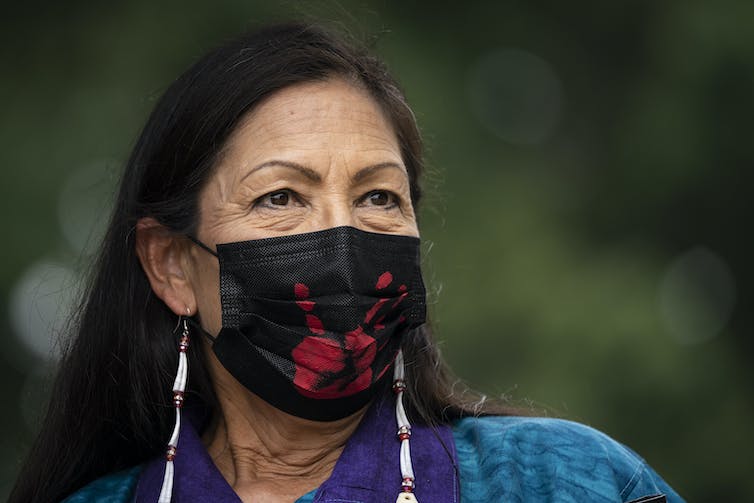 Secretary of the Interior Deb Haaland created a Missing and Murdered Unit within the Bureau of Indian Affairs in April 2021.Drew Angerer/Getty Images

Grassroots Native-led efforts, particularly over the past five or six years, are starting to bring national attention to the issues of crime and violence that affect Indigenous people.

In 2019, the Trump administration formed the Task Force on Missing and Murdered American Indians and Alaska Natives, which became known as Operation Lady Justice. In April 2021, Secretary of the Interior Deb Haaland, a member of the Pueblo of Laguna, created a Missing and Murdered Unit within the Bureau of Indian Affairs to improve collaborative efforts among law enforcement agencies. Previously, as a Representative from New Mexico, she sponsored the Not Invisible Act in 2019 to improve intergovernmental coordination and consult with tribes to establish best practices to lessen the number of missing Indigenous people.

And in October 2021, President Joe Biden proclaimed Oct. 11 to be Indigenous People’s Day, a day to acknowledge the atrocities of the colonizers while also recognizing ongoing contributions of Native people.

While thousands of unsolved cases of missing and murdered Native Americans await justice, perhaps now there will be understanding and a commitment to address this ongoing tragedy.

Wendelin Hume does not work for, consult, own shares in or receive funding from any company or organisation that would benefit from this article, and has disclosed no relevant affiliations beyond their academic appointment.