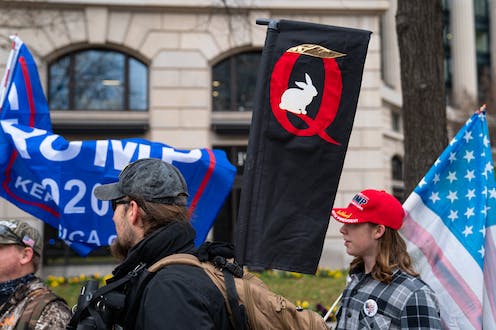 Many people are led to conspiracy theories and extremist views from less extreme positions.Robert Nickelsberg/Getty Images

Have you had the experience of looking at some product online and then seeing ads for it all over your social media feed? Far from coincidence, these instances of eerily accurate advertising provide glimpses into the behind-the-scenes mechanisms that feed an item you search for on Google, “like” on social media or come across while browsing into custom advertising on social media.

Those mechanisms are increasingly being used for more nefarious purposes than aggressive advertising. The threat is in how this targeted advertising interacts with today’s extremely divisive political landscape. As a social media researcher, I see how people seeking to radicalize others use targeted advertising to readily move people to extreme views.

Advertising to an audience of one

Advertising is clearly powerful. The right ad campaign can help shape or create demand for a new product or rehabilitate the image of an older product or even of an entire company or brand. Political campaigns use similar strategies to push candidates and ideas, and historically countries have used them to wage propaganda wars.

Advertising in mass media is powerful, but mass media has a built-in moderating force. When trying to move many people in one direction, mass media can only move them as fast as the middle will tolerate. If it moves too far or too fast, people in the middle may be alienated.

The detailed profiles the social media companies build for each of their users make advertising even more powerful by enabling advertisers to tailor their messages to individuals. These profiles often include the size and value of your home, what year you bought your car, whether you’re expecting a child, and whether you buy a lot of beer.

Consequently, social media has a greater ability to expose people to ideas as fast as they individually will accept them. The same mechanisms that can recommend a niche consumer product to just the right person or suggest an addictive substance just when someone is most vulnerable can also suggest an extreme conspiracy theory just when a person is ready to consider it.

It is increasingly common for friends and family to find themselves on opposite sides of highly polarized debates about important issues. Many people recognize social media as part of the problem, but how are these powerful customized advertising techniques contributing to the divisive political landscape?

Breadcrumbs to the extreme

One important part of the answer is that people associated with foreign governments, without admitting who they are, take extreme positions in social media posts with the deliberate goal of sparking division and conflict. These extreme posts take advantage of the social media algorithms, which are designed to heighten engagement, meaning they reward content that provokes a response.

Another important part of the answer is that people seeking to radicalize others lay out trails of breadcrumbs to more and more extreme positions. 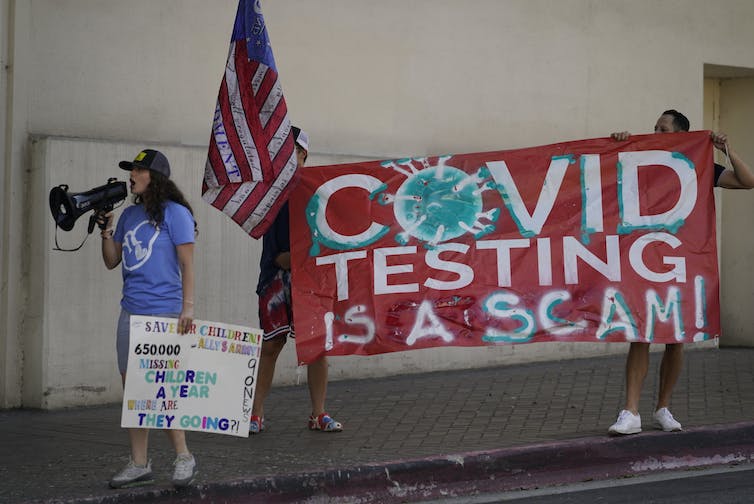 Many people feel that they have ‘figured out’ conspiracy theories for themselves, but in many cases they’ve been deliberately led to them.AP Photo/Damian Dovarganes

These social media radicalization pipelines work much the same way whether recruiting jihadists or Jan. 6 insurrectionists.

You may feel like you’re “doing your own research,” moving from source to source, but you are really following a deliberate radicalization pipeline that’s designed to move you toward more and more extreme content at whatever pace you will tolerate. For example, after analyzing over 72 million user comments on over 330,000 videos posted on 349 YouTube channels, researchers found that users consistently migrated from milder to more extreme content.

The result of these radicalization pipelines is apparent. Rather than most people having moderate views with fewer people holding extreme views, fewer and fewer people are in the middle.

How to protect yourself

What can you do? First, I recommend a huge dose of skepticism about social media recommendations. Most people have gone to social media looking for something in particular and then found themselves looking up from their phones an hour or more later having little idea how or why they read or watched what they just did. It is designed to be addictive.

I’ve been trying to chart a more deliberate path to the information I want and actively trying to avoid just clicking on whatever is recommended to me. If I do read or watch what is suggested, I ask myself “How might this information be in someone else’s best interest, not mine?”

Second, consider supporting efforts to require social media platforms to offer users a choice of algorithms for recommendations and feed curation, including ones based on simple-to-explain rules.

Third, and most important, I recommend investing more time in interacting with friends and family off of social media. If I find myself needing to forward a link to make a point, I treat that as a warning bell that I do not actually understand the issue well enough myself. If so, perhaps I have found myself following a constructed trail toward extreme content rather than consuming materials that are actually helping me better understand the world.

Jeanna Matthews is affiliated with and holds leadership roles within the Association for Computing Machinery (ACM) and Institute of Electrical and Electronics Engineers (IEEE).