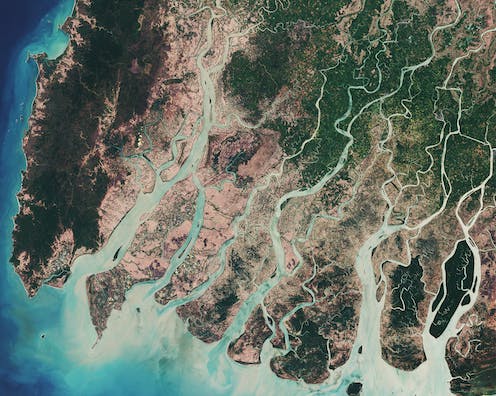 Throughout history, important cities around the world have flourished along river banks. But rivers can also be destructive forces. They routinely flood, and on rare occasions, they can abruptly shift pathways.

These “channel-jumping” events, which are called avulsions, have caused some of the deadliest floods in human history. Avulsions on China’s Yellow River killed over 6 million people in the late 19th and early 20th centuries. Similar events have been linked to the decline of Mesopotamian civilization along the Tigris and Euphrates rivers in what is now Iraq, Kuwait, Turkey and Syria.

In a newly published study, I worked with colleagues to map the global distribution of avulsions on river fans and deltas. We used satellite images of over 100 rivers from 1973 to the present, providing a half-century of bird’s-eye views of global river evolution.

We discovered 113 river avulsion events in temperate, tropical and dry climates. Of these events, 33 were on alluvial fans. These land forms develop when rivers flow out of mountains or canyons onto an open plain or into the ocean and spread out, depositing dirt and gravel in a triangle-shaped area.

The other 80 events occurred on river deltas – fertile, low-lying regions where slower-moving rivers branch into many channels that empty into lakes or the ocean, creating networks of wetlands. We used this novel data set to answer a simple question: What determines where avulsions happen?

The Mississippi River has changed course repeatedly over the past 7,000 years, depositing sediment that created much of the land of southern Louisiana.

Avulsions occur because of sediment deposition. Over time, rivers deposit sediment at the avulsion site, choking up the river with sediment. Water always flows downhill, so as its current course becomes increasingly blocked, it eventually jumps to a new location.

Much like earthquakes, river avulsions happen periodically in the same places. They disperse sediment and water across the rivers’ flood plains, producing these formations’ characteristic triangular shape.

One recent example occurred in 2008, when the Kosi River in India shifted its course by over 60 miles (100 kilometers) in a matter of days, displacing over 3 million people.

In the U.S., the Mississippi River has changed course many times over the past 7,000 years. Today, a multi-dam control structure in central Louisiana keeps it from jumping its banks and joining with the Atchafalaya River, but scientists have warned that a mega-flood could overwhelm these barriers, causing widespread economic damage across southern Louisiana.

A river may not change course more than once over many decades, or even centuries. Scientists’ understanding of where these events occur is poor, and rests largely on a handful of detailed observations on large deltas, plus laboratory and computer models.

In this lab experiment, a river delta is built through repeated avulsions. As the river emerges from the canyon (left side), it slows and deposits sediment. When the river’s path becomes blocked, it changes course and drops sediment in new areas, creating a fan-shaped delta over time.

Our global database revealed three distinct types of avulsions. First, the 33 avulsions on alluvial fans occurred when the rivers exited canyons. Once the rivers no longer flowed through confined valleys, they were able to spill over to one side or another toward the lowest ground.

The 80 avulsions that happened on deltas were influenced by forces in their backwaters. A river’s backwater is the zone where the speed of the current is affected by the presence of the ocean or lake at the river’s end. In this zone, the river current either slows down or speeds up in response to changing flood conditions. Scientists can estimate the backwater length from the size and slope of the river.

For example, the Mississippi River has a backwater length of nearly 300 miles (480 kilometers), which means that the speed of its flow is affected by the Gulf of Mexico all the way to a point north of Baton Rouge, Louisiana. Steeper rivers can have a backwater length scale as short as 0.6 miles (1 kilometer). 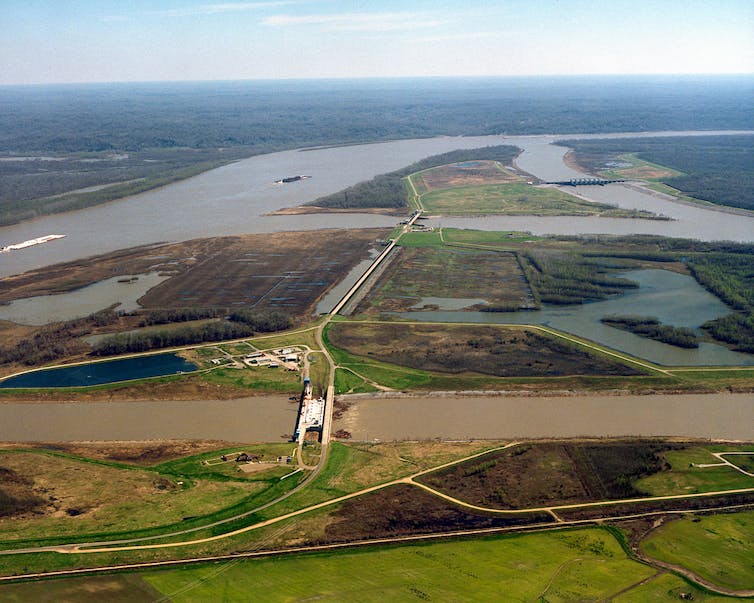 When a river is flowing normally, it slows down in its backwater stretch and drops sediment onto the riverbed. However, when floods occur, the larger volume of faster-moving water erodes the riverbed.

This effect starts at the river’s mouth and moves upstream, in the opposite direction from the water’s flow, erasing some of the sedimentation that has built up prior to the flood. Ultimately, this interplay between sedimentation and erosion causes the river to choke up with sediment at a location that roughly coincides with the backwater length.

Our database showed that 50 of the 80 avulsion events that occurred on deltas happened approximately at the backwater length. For example, the Catatumbo River in South America changed course in 1982 about 6.5 miles (10.5 kilometers) inland from the point where it flows into Venezuela’s Lake Maracaibo – close to its backwater length, which is 8.5 miles (13.7 kilometers).

However, we also discovered a new class of avulsions on deltas that did not reflect either valley confinement or the backwater length. These rivers changed course far upstream from the point where they were affected by the lakes or oceans at their mouths.

These deltas were either on steep tropical islands like Madagascar and Papua New Guinea or in desert environments such as Eritrea. In these places, rivers carry exceptionally large quantities of sediment during floods.

When the rivers flood, they erode their beds starting at their mouths and working backward far upriver, similar to large rivers like the Mississippi. However, the combination of long typical flood durations and exceptionally high sediment loads during floods enables the erosion to progress far upstream. As a result, these rivers can change course well above the backwater zone where avulsions happen in large coastal rivers.

Our description of these three types of avulsions provides the first framework for predicting where rivers will change course on fans and deltas worldwide. These findings have crucial implications, especially for river deltas, which are home to some 340 million people around the world. 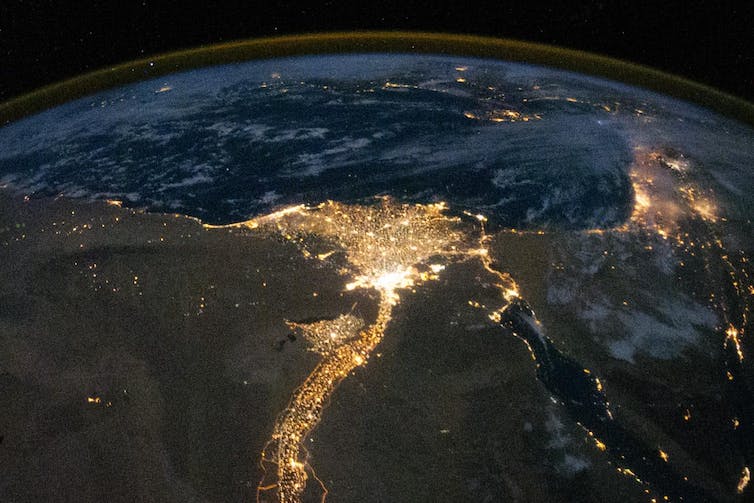 An aerial view of the Nile River delta at night from the International Space Station. Metropolitan Cairo is the bright area at the base of the fan.NASA

Most deltas are only a few feet above sea level, and some are very densely populated, such as the Mekong and Ganges-Brahmaputra deltas. Our results show that avulsion sites on deltas can move from their historic locations to new areas. Rapid sea level rise can move avulsion sites inland on deltas, exposing new communities to catastrophic flood risks.

We also found that rivers in our second group – those where avulsions occur in the backwater zone – can shift into the third group, where avulsions happen significantly farther upstream. We find that this can happen if the typical duration of flooding on a river or the river’s sediment supply changes.

Climate change is already increasing flooding in many parts of the world and washing more sediments into rivers. Land use changes, such as converting forests to farmlands, also are increasing sediment loads. In my view, it is imperative to understand how such changes can affect dynamic, volatile river systems – and the people who live around them – well into the future.

Vamsi Ganti receives funding from the National Science Foundation, and the donors of the American Chemical Society Petroleum Research Fund.