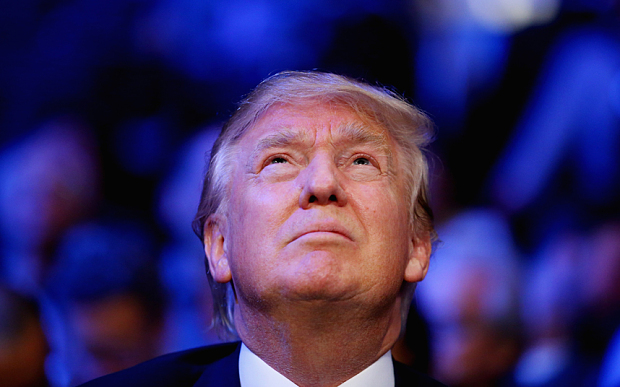 German political commentators are still grappling with the Trump phenomenon. Nobody takes him really seriously or sees him as the next U. S. President. No one within the German political class has spoken positively about Trump. They rather ask, who can stop him?

Donald Trump's bid for the Republican presidential nomination in 2016 starts to disturb the power brokers of the Republican party machine. They are already thinking how they can prevent Trump’s ascendance if he should continue his triumph in the primaries. For these string-pullers, Trump is too independent and is no part of Washington’s venal political community.

Trump’s direct and unpretentious style to deal with sensitive political issues irritates the media class, because he couldn’t care less about the usual political jargon. He talks about politically sensitive issues on a saloon bar level. Many of Trump's political statements are abysmal; nonetheless, it seems as if ordinary folks like them.

So far, many political commentators are all for Clinton because the other Republican candidates are lacking any distinctive image. Even Jeb Bush, the younger brother of former President George W., seems having no chance, although he was to begin with praised. He belonged to those Republicans who made a pilgrimage to casino-mogul Sheldon Adelson in Las Vegas in order to pledge an oath of allegiance to Israel. Hillary Clinton pledged her own Israel loyalty to Haim Saban, the Media mogul, who supports the Democratic Party. Both multi-billionaires seem to divide their labor between themselves when it comes to Israel. Sheldon Adelson buys off Republican candidates and Saban buys Democratic ones, except for Donald Trump. Trump’s greatest advantage towards the other candidates is his financial independence. He is not in the pocket of the Zionist lobby.

Beginning of last December, Donald Trump told a Republican Jewish Coalition funded by Adelson, that he can't be bought. "You’re not going to support me because I don’t want your money", he said. In his speech, for which he was heckled, he attacked Jeb Bush for taking money from the Lobby and Mario Rubio, the senator from Florida and a former Jeb Bush protégé, for his statement that Trump shouldn't question "Israel's commitment to peace". Two weeks later, Trump said about Rubio that Adelson would mould him into a "perfect little puppet".

In every respect, the most checkered candidate in the race seems Hillary Clinton. She is the favorite of the war-prone Ziocons who unconditionally support Israel and Saudi Arabia against Iran. These people haven't given up their efforts to undo the nuclear deal with Iran. The hawkish Clinton has already mildly distanced herself from the deal. Few years ago she threatened Iran with total "obliteration" if that country would attack Israel with its non-existing nuclear weapons.

Hillary Clinton's record as Secretary of State is highly controversial, to put it mildly. Together with Samantha Power and Susan Rice, they pushed President Obama to intervene in Libya and topple its leader, Muammar al-Gaddafi. She is infamous for her frivolous statement about the lynching of Gaddafi: "We came, we saw, he died."1

For the Ziocons and the far-right wing Netanyahu government, the hawkish Clinton would be the best of all candidates. Her voting record on Israel and the attack on Iraq plus her tough stance on Iran is going to make her the Lobby's favorite. She supports the Zionist separation wall in Israel but opposes Trump’s and Ted Cruz' call for a wall along the Mexican-American border. At the latest Brookings institution's Saban Forum, she delivered an embarrassingly pro-Israel speech saying, inter alia, that her first act as U. S. President would be an invitation to Netanyahu. She also made Haim Saban a favor by penning an anti-BDS letter. With such a record, the blessings of the Zionist lobby is certain.

Having watched the debate of the Republican candidates, I felt like seeing a remake of the Rocky Horror Picture Show. How they propose to handle the West’s instigated civil war in Syria or to deal with Putin's Russia is reckless and horrifying.

In an interview with "Esquire"2 in 2004, when the Iraq war was unfolding, Trump admitted that the U. S. had created a total mess, and the war didn't make any sense. "Does anybody really believe that Iraq is going to be a wonderful democracy ... Two minutes after we leave, there's going to be a revolution, and the meanest, toughest, smartest, most vicious guy will take over ... What was the purpose of this whole thing? Hundreds and hundreds of young people killed. And what about the people coming back with no arms and legs? Not to mention the other side. All those Iraqi kids who’ve been blown to pieces. And it turns out that all of the reasons for the war were blatantly wrong. All this for nothing!"

Had the American political class in 2004 already followed Trump’s realism, the country would be in better shape.

Dr. Ludwig Watzal works as a journalist and editor in Bonn, Germany. He runs the bilingual blog http://between-the-lines-ludwig-watzal.blogspot.de/