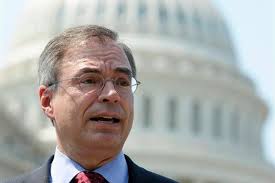 This letter comes to you as the House of Representatives winds down its legislative session and Members return to their home districts for the remainder of the month. Fortunately, the House was able to pass two important immigration bills before the August recess: The first House bill, adopted last Friday, would allocate $694 million while modifying a 2008 anti-human-trafficking law to make it easier to deport unaccompanied minors who have flooded across the United States border in recent months. The second bill would block the Obama administration from continuing to enforce a 2012 executive action, known as the Deferred Acton for Childhood Arrivals, or DACA, which delays most deportations for children who arrived in the United States before 2007.

Both pieces of legislation will hopefully deter parents from sending their children on the long and dangerous journey from Central America.Throughout the month of July, many reporters have asked me about what we should do about the flow of immigrant children into our nation. I sat down with Patrice Sanders of Fox 45 Morning News a week ago for a chat on immigration. Click below to watch the interview.

I also spoke about the issue on an episode of MPT’s State Circle, Fox News’ America’s News Headquarters, and Comcast Newsmakers. (Click on each of the links to watch.)

Thank you for your continued energy and enthusiasm, as reflected in your letters and Facebook posts. If you haven’t already, LIKE my Facebook page. You can also follow me on Twitter @RepAndyHarrisMD. Also, there are certain times during an election year when candidates are not allowed to send unsolicited mail to those they represent in Congress. This is called a blackout period. We are entering into one of these three-month blackout periods starting August 7th. If you’d like to stay up to date on what I am doing in Washington during those three months, don’t forget to sign up for my e-newsletter at my website.

Thank you for the opportunity to serve you in Congress!