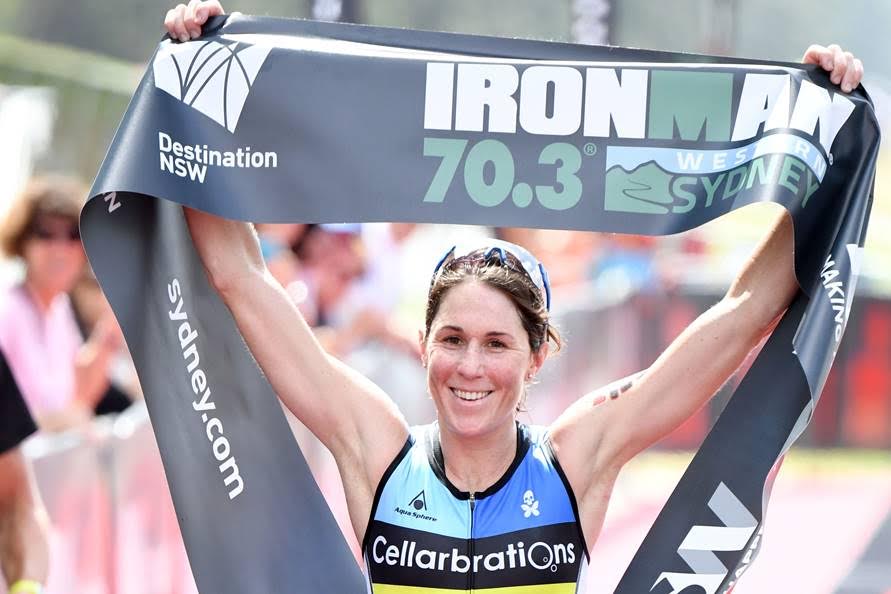 ANNABEL LUXFORD AND DAN WILSON IN A LEAGUE OF THEIR OWN AT IRONMAN® 70.3® WESTERN SYDNEY.

Luxford produced a dominant performance exiting the swim with Natalie Van Coevorden over two minutes ahead of a chase pack that included Kirralee Seidel.

Onto the bike she was never headed and rode, then ran, away to a win by almost six minutes, Van Coevorden faded on the run to finish third with Seidel snatching second.

“Really happy to come back today and grab the win it’s never easy to come back and get the win again, but you couldn’t have asked for better conditions, it started to get warm towards the end. The crowd support was fantastic, the other athletes pushed me, I’m really happy,” Luxford said.

For Wilson, it was the perfect end to a year that started with a run of injuries that kept him from racing. His last month has been career defining as he added the Noosa Triathlon, Australia’s most prestigious Olympic distance title, to his trophy cabinet and today recorded his first IRONMAN 70.3 win.

“That was kind of hard out there today; I tried to push the whole way, which is a tough way to race. I pushed the swim and bike and then wanted to see what I could do on the run,” he said. “The last 5km hurt today.”

Wilson, along with IRONMAN 70.3 debutant Ryan Fisher, made their presence known from the get-go, with the Olympic-distance specialists off the front of the swim pack.

By 20kms on the bike the pair had pushed their lead to a one minute advantage over Todd Skipworth – himself a former Olympic rower – and James Davy. Fisher, in his first IRONMAN 70.3 excursion, managed to hold on with Wilson with the pair taking a 2:17 buffer onto the run.

However, Wilson, on the back of years racing against Fisher knew he needed to break his young rival early. By mid-run, he had pushed to a one minute advantage, and from there he eased into his work with the day’s best run of 1:13:13 enough for his victory in 3:45:23.

Fisher impressed with second place 1:40 back with Davy prevailing in the battle for the final spot on the podium.

“I didn’t know what to expect, I started off okay and thought this pace isn’t too bad. But 50km in I was in a deep hole, I started surging for gels anything to eat, and then came good,” he said. “That was my day few bad patches that then came good, it’s so different from short course stuff.”

It was a maiden IRONMAN 70.3 victory for Wilson who is now setting his sights on the endurances distances and next year’s IRONMAN 70.3 World Championship in the USA.

“It’s been an unbelievable year, I was injured at the start of the year, and to win in Noosa and recently got engaged, so it’s been a great finish to the year.”

Luxford confirmed she would love to chase a third IRONMAN 70.3 Western Sydney title in 2017 when the event doubles as the IRONMAN 70.3 Asia-Pacific Championship.

“I’d love to come back next year for the IRONMAN Asia Pacific Championships here; it’s a great venue for a championship race,” she said.

The 2016 IRONMAN 70.3 Western Sydney is proudly supported by the NSW Government through its tourism and major events agency, Destination NSW

A Wanda Sports Holdings company, IRONMAN operates a global portfolio of events that includes the IRONMAN® Triathlon Series, the IRONMAN® 70.3® Triathlon Series, 5150™ Triathlon Series, Iron Girl®, IRONKIDS®, six of nine International Triathlon Union World Triathlon Series races, road cycling events including the UCI Velothon Majors Series, mountain bike races, premier marathons and other multisport races. IRONMAN’s events, together with all other Wanda Sports Holdings events, provide more than 680,000 participants annually the benefits of endurance sports through the company’s vast offerings. The iconic IRONMAN® Series of events is the largest participation sports platform in the world. Since the inception of the IRONMAN® brand in 1978, athletes have proven that ANYTHING IS POSSIBLE® by crossing finish lines at the world’s most challenging endurance races. Beginning as a single race, IRONMAN has grown to become a global sensation with more than 260 events across 42 countries. For more information, visit www.ironman.com.