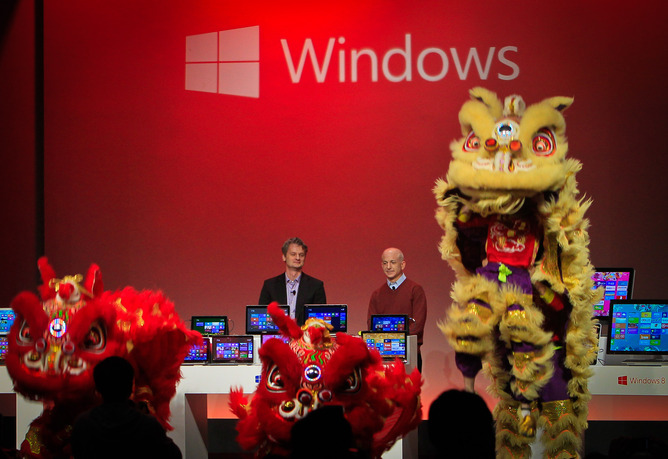 Microsoft and China used to get along. EPA

China’s raft of anti-monopoly investigations has become a source of growing controversy. Given that the targets are often American or European firms, much of the debate inevitably surrounds what the real motives for these actions might be. Yet perhaps the most important consideration – one that has so far been largely overlooked – is whether China might become a victim of its own zeal.

It was the recent announcement of an inquiry into the world’s largest software manufacturer that first drew international attention to the activities of the State Administration for Industry and Commerce (SAIC). The seizure of computers and documents from Microsoft’s offices in four Chinese cities fuelled suspicions that some kind of crusade against high-tech Western companies could be under way. After all, leading wireless technology developers Qualcomm and InterDigital were already facing SAIC probes. On August 6, Microsoft was raided once again, this time along with Accenture, its partner in China.

Commentators have since argued that SAIC’s hit-list is shaped by mere coincidence, sheer necessity or something altogether different and there are indeed several points that might immediately be made in China’s defence. For a start, even state-owned enterprises have been the subject of anti-monopoly investigations: China’s foremost liquor producers, Kweichow Moutai Co and Wuliangye Group, were fined RMB449m (US$72 million) for price-fixing only last year.

The Chinese government has also not confined its interest to the high-tech sector: it has pursued a number of major foreign pharmaceutical companies, for instance, including GlaxoSmithKline, AstraZeneca, Roche, Bayer and Sanofi. Now, car firms Audi and Chrysler are in the regulators' sights. And China is hardly unique. High-tech firms – Microsoft among them – have been involved in similar cases all over the world, including in the US and within the EU.

Nonetheless, a straightforward desire to stamp out anti-competitive behaviour cannot entirely explain SAIC’s current fervour. It is right to concede, for instance, that China has long been concerned by the security implications of using US-made technology products – witness the government’s reluctance to procure PCs loaded with Windows 8 – and Edward Snowden’s claims about American IT companies’ complicity in far-reaching spying programme have undoubtedly heightened such fears.

But maybe the most realistic scenario of all can be found in the middle ground that stretches between the all-out apologists and the full-blown conspiracy theorists. It is that the principal aim of China’s push against Western monopolies is to protect and promote the cause of Chinese innovation.

By way of illustration, take TD-SCDMA, China’s so-called “indigenous standard” for third-generation (3G) mobile telecommunications. Having relied exclusively on Western technology in the 2G era, China was keen for its own version to compete directly with rival 3G standards developed in the West. The government offered financial support for TD-SCDMA developer Datang Telecom, set up a dedicated alliance of domestic and foreign vendors and granted a TD-SCDMA 3G licence to China Mobile.

Unfortunately, Datang owns only a small share of the technology patents used in TD-SCDMA, which remains primitive in comparison with its competitors. As a result, many Chinese consumers now find themselves saddled with an inferior technology that lags at least three to five years behind its Western rivals; and China Mobile, the largest mobile provider in China and the world, has seen its market share and value decline accordingly. Clearly, China’s efforts to come up with indigenous innovation are being hampered.

The advent of 4G promises little better. For China Mobile a smooth evolution requires huge extra investment in hardware and software: predictably hamstrung, its 4G service is still at a disadvantage even to some rivals' 3G offering. This is the social welfare loss that China pays for its sticking to its indigenous but inferior technology.

Situations such as these have uncomfortable echoes of a China many thought was long gone. During the years of isolation that preceded economic reform, Chinese consumers were wearily accustomed to second-class products and services. Any arbitrary rejection of cutting-edge technology from elsewhere in the world may well deliver a short-term boost to domestic firms, but it also risks a return to the bad old days.

The ban on accessing the likes of Google search, Gmail, Google Scholar, Facebook and Twitter represents the apogee of this trend to date. Complaints have been prolonged, loud and clear – particularly from scientists, many of whom have been cut off from the international frontiers of research – yet the situation persists.

It may only be a matter of time before China surpasses the US as the largest economy on Earth, and yet it is vital to remember that power is measured in much more than GDP. Technology also counts, and the fact is that China’s own capacity for innovation is still in its infancy, whatever the 15-year plans may say.

Now it increasingly appears China is determined to catch up with the West while simultaneously discriminating against the very same technological excellence it hopes one day to emulate. Such an approach is likely to demand both considerable patience and enormous cost. The de-Westernisation implicit in the anti-monopoly drive suggests policymakers are willing to pay the price, but denying consumers the best the market has to offer in the meantime must ultimately be deemed an act of wilful deprivation. It is fundamentally at odds with China’s declared ambition to become an innovation-orientated nation fit for the information age.