This week the deputy premier of New South Wales, home to most teams in Australia’s National Rugby League, suggested getting football fans back in the stands might be an issue of fundamental rights.

If 20,000 people could rally in support of Black Lives Matter in central Sydney, John Barilaro reportedly said, the NRL could handle similar in a stadium:

So as far as I’m concerned the evidence is clear that we can open up these restrictions.

This narrative should not obscure the more obvious story here: of elite sport as entertainment business.

The accounts of the National Rugby League and the bigger Australian Football League are representative of professional sports leagues around the world. Most of the riches now rest with on the audience watching at home. They don’t need fans in the stands for ticket sales. They do need them to make their sports great television. 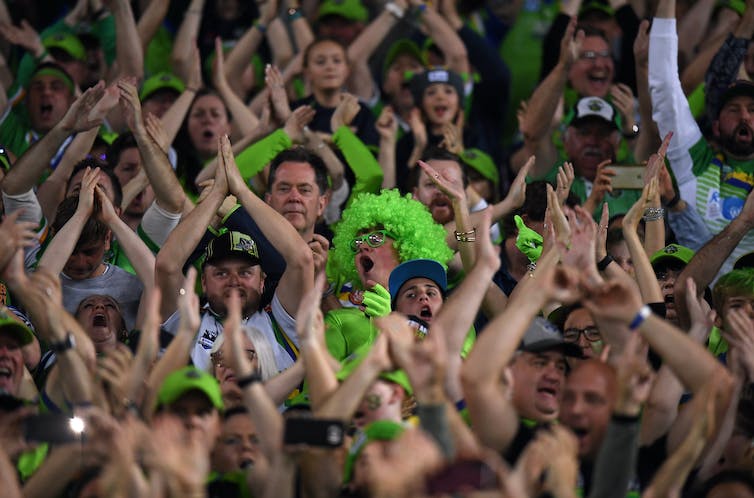 Canberra Raiders supporters cheer on their team against the Sydney Roosters in the 2019 NRL grand final. Dean Lewins/AAP

In the case of the NRL, game receipts accounted for less than 10% of its revenue in 2019. The AFL, with crowd sizes slightly more than double the NRL, may make 15% – not much more in the greater scheme of things.

For both leagues more than 70% of revenue flows from broadcast rights and corporate sponsors.

The business model is simple: attract a broadcast audience, sell that audience to advertisers. So the critical metric is viewing numbers.

But what viewers want is excitement and a sense of occasion. These are hard to evoke without a crowd.

The AFL and NRL both played rounds in front of empty stands prior to suspending their seasons in late March. The unaugmented viewing experience was deemed unsatisfactory, as Nine’s NRL head, Simon Fordham, explained:

The players are out there giving 110%. The commentators are reacting to what they are seeing and also delivering emotional, powerful calls. But the crowd is there just to mesh those two things together. 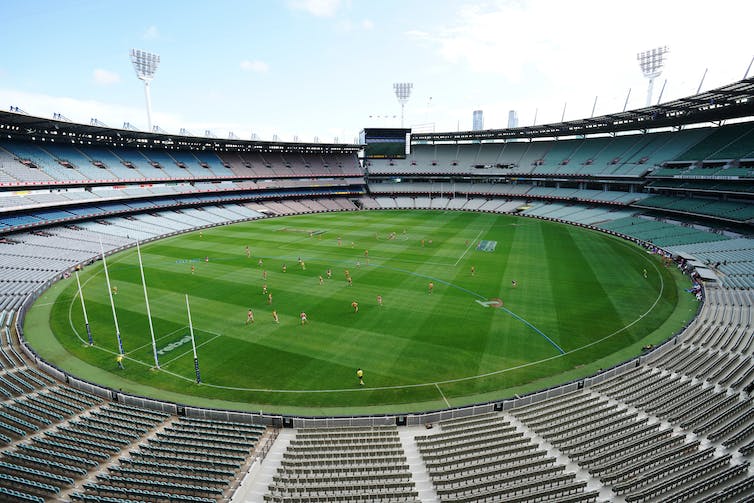 The Hawthorn Hawks and the Brisbane Lions play without supporters at the MCG in round 1 of the AFL season March 22 2020. Michael Dodge/AAP

Both Nine and Fox Sport added canned crowd noises to NRL games when the season resumed a fortnight ago. Viewer reactions were mixed.

The first match of the round, a Thursday night clash between the Parramatta Eels and Brisbane Broncos, was the most watched regular season NRL game since 2014. Channel Nine scored more than 951,000 viewers, and Fox Sports 355,000. 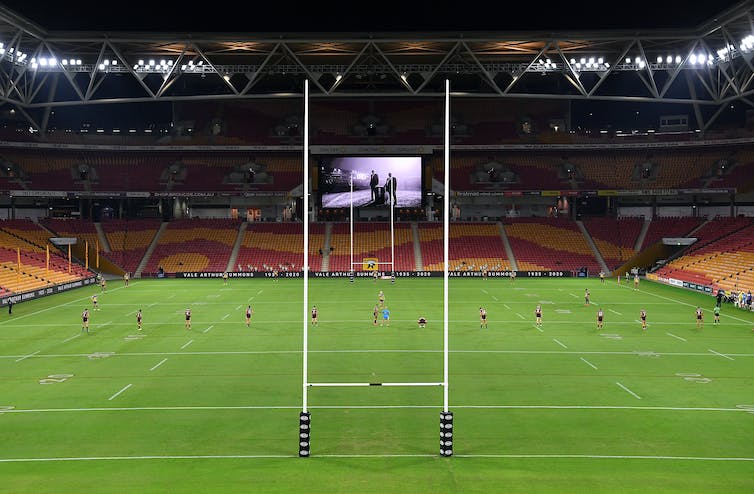 The Brisbane Broncos play the Parramatta Eels at Suncorp Stadium in Brisbane on May 28 2020. Darren England/AAP

The AFL has agreed to its broadcast partners, Channel Seven and Foxtel, also using canned crowd noises. With the AFL season resuming tonight, we’ll get to judge its success.

The NRL’s annual report shows game receipts were less than 10% of its 2019 revenue of almost A$556 million. Broadcast revenue – from Channel Nine and Fox Sports – was about A$324 million, more than 60%. “Sponsorships and wagering” (revenue from poker machines in league clubs) made another 16%. 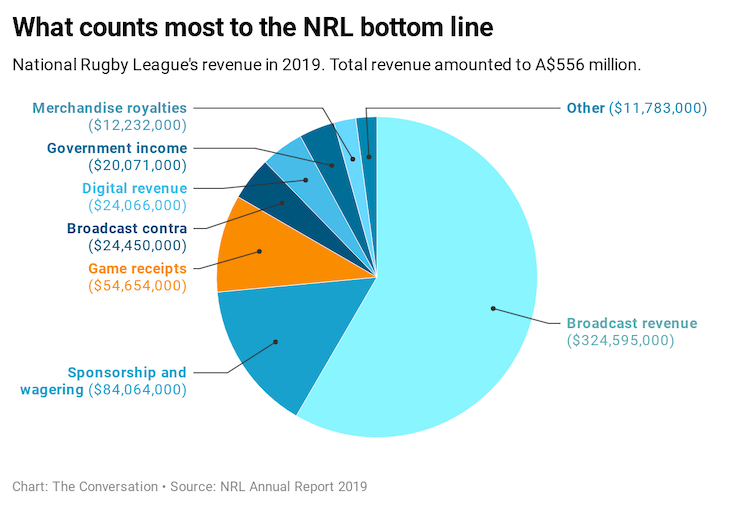 CC BY-SA The AFL’s annual report does not state game receipt revenue. This is rolled into a wider figure for “commercial operations”, which includes sponsorship and wagering. 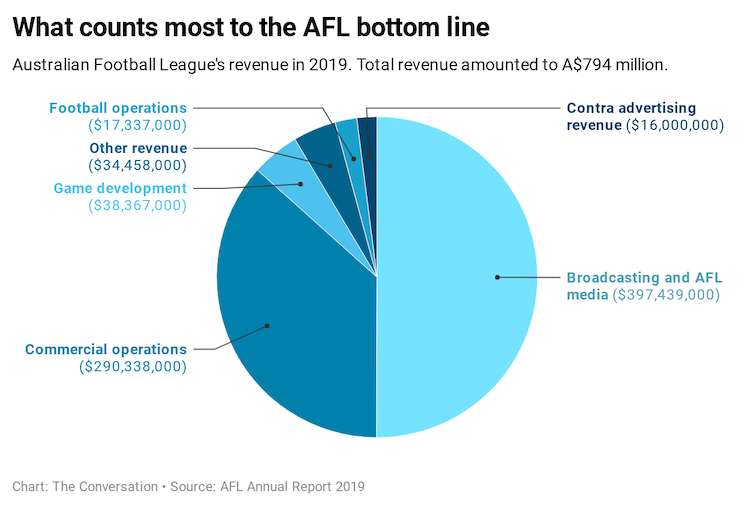 CC BY-SA But the AFL report does detail crowd numbers. We can use those to make a ballpark estimate of game revenue based on what we know about the NRL’s receipts and crowd sizes. An average of 35,105 people attended the 198 games of the AFL’s 2019 premiership season. The NRL annual report does not specify attendance numbers, but most other sources suggest average match attendances of 15,000 to 16,000 at its 201 games in 2019. 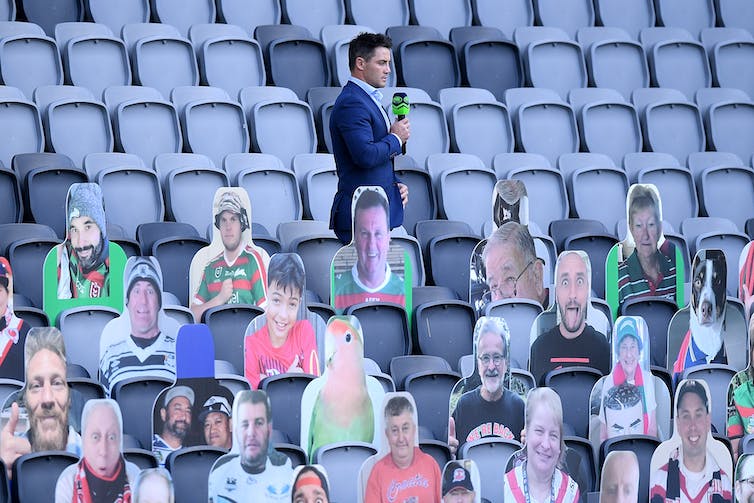 Cutout fans at the NRL match between the Canterbury-Bankstown Bulldogs and the St George Illawarra Dragons on Monday, June 8, 2020. an Himbrechts/AAP This is an admittedly rough calculation because there are many possible variables. But assuming most things being equal, the AFL’s game receipts for more than double the NRL’s numbers would be worth about A$115 million – 14.5% of its total revenue of A$794 million. Which is not insignificant. On the other hand, there’s more than A$500 million flowing from television audiences. Broadcast pressure So the number to focus on over the coming weeks to judge the health of both codes will be the average number TV viewers per game. For the NRL, that figure was 459,000 in 2019. For the AFL, it was a little more than 1 million. Both leagues are already under pressure to renegotiate current deals with their broadcast partners, cancelling quarterly payments. Read more: From spit to scrums. How can sports players minimise their coronavirus risk? They’ll do what they can to make their product a ratings winner. Expect more experiments with crowd augmentation, and for a harder push to bring back real fans if those experiments fail to mesh.