The students who come to my class are very closely related to all the evil girls who are very interested in their bodies and sex and pleasure.

“I learn a lot from them,” she revealed, “about how to have pleasure and how cool the female body is.”

When I visit The Body Electric at the National Gallery of Australia, I can feel Acker shadowing me. Her influence is ever present in a brilliantly curated exhibition by Shaune Lakin and Anne O’Hehir.

Read more: Staff cuts will hurt the National Gallery of Australia, but it’s not spending less on art. It’s just spending it differently

Two decades have passed since Acker’s death, but the eroticism she brought to art remains central to women artists.

The Body Electric features ground-breaking photography and video from the 1960s, 70s and 80s alongside more recent work from Australian and international artists. 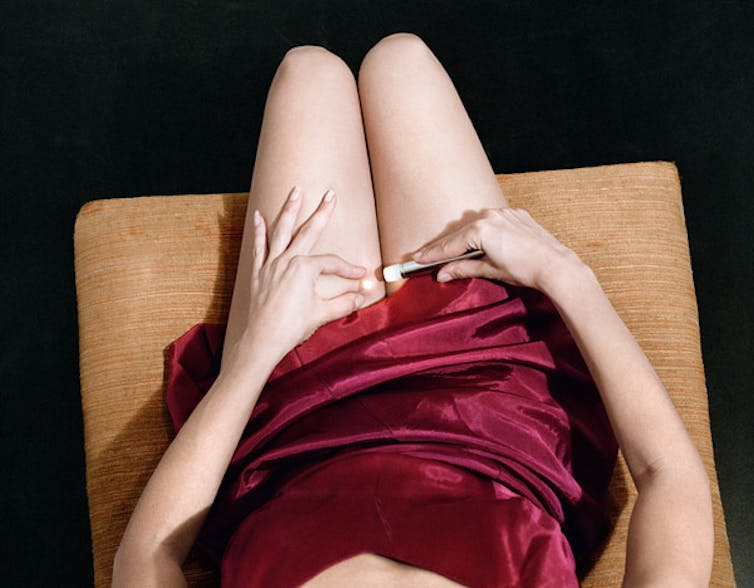 Nan Goldin’s photo series, The ballad of sexual dependency (1986), renders the traces of love’s violence. Its most powerful image, Nan one month after being battered (1984), is an honest self-portrait showing the wounds of physical assault by her then-lover. 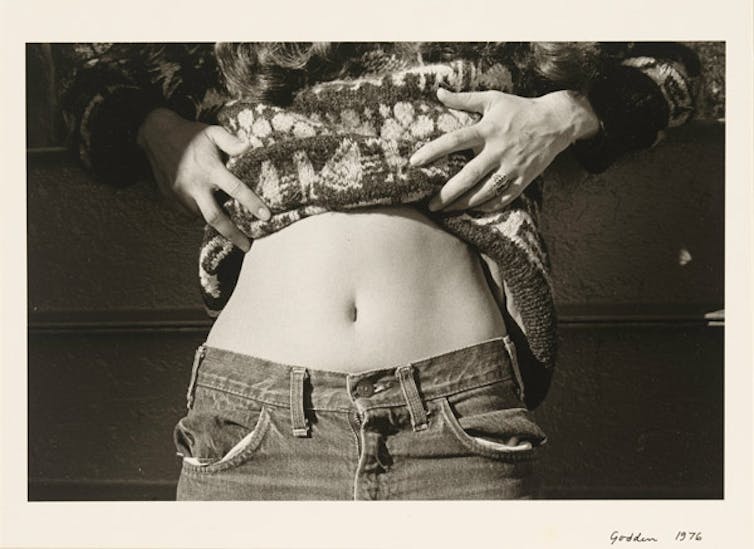 Christine Godden mischievously reveals her belly button in a humble black and white self-portrait titled Self. Sunny Day in Winter (1974). Collier Schorr’s Ass and leaf (2015), a simple but subversive image, reveals a backside with stretch marks.

The more powerful works question the ways women and sexuality have historically been – and continue to be – represented from the perspective of white hetereosexual men. 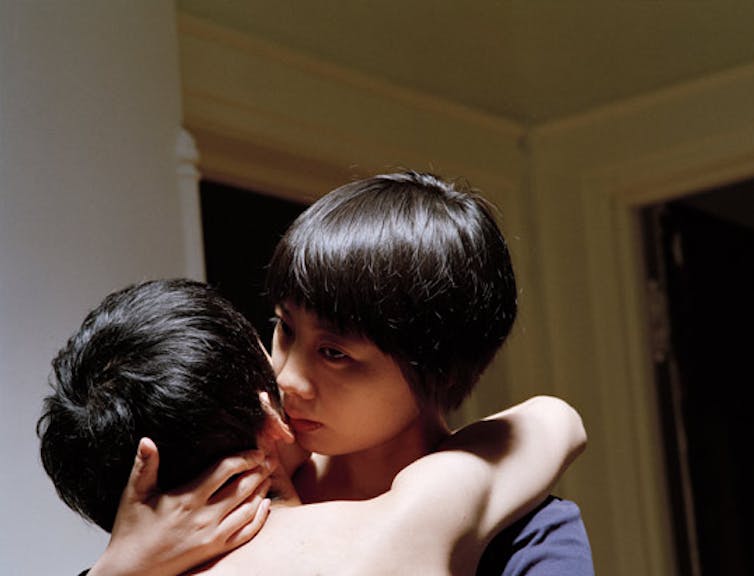 Pixy Liao. Some words are just between us from Experimental relationship, 2010, chromogenic photograph, 40.6 (h) x 50.8 (w) cm. Image courtesy of the artist

Directly alongside Head is Female sensibility (1973), a recording of the artist Lynda Benglis kissing her friend and colleague, Marilyn Lenkowsky. The camera captures the thrill of their touch. In close detail we see Benglis use her tongue to searchingly caress the inside of her friend’s mouth.

But the work is more complicated than a kissing performance between two women: their eyes are not focused on each other, but instead follow a moving camera.

The camera – and therefore the viewer – becomes proxy for the “male gaze”: the positioning of women in visual media as sexual objects for the visual pleasure of heterosexual men.

Read more: Explainer: what does the 'male gaze' mean, and what about a female gaze?

Viewing Benglis and Donegan’s videos simultaneously side-by-side is mesmerising, their collective power amplifying the critique of the male gaze at the heart of the exhibition. 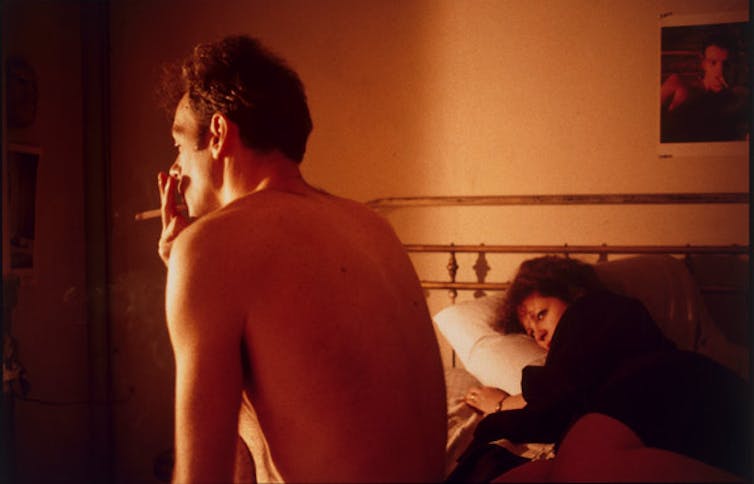 When Acker talked of the “evil girls” who came to her class, she (like the artists in this exhibition) was rejoicing in them – while mocking outdated patriarchal standards that repress female representations of sexual pleasure.

The Body Electric visualises Acker’s legacy of the “female gaze” in art: a female perspective of sex, desire and pleasure beyond patriarchal limits of passivity and reproduction. The artists in this exhibition position women as powerful creators, acutely conscious of their sexual agency as women and as artists. 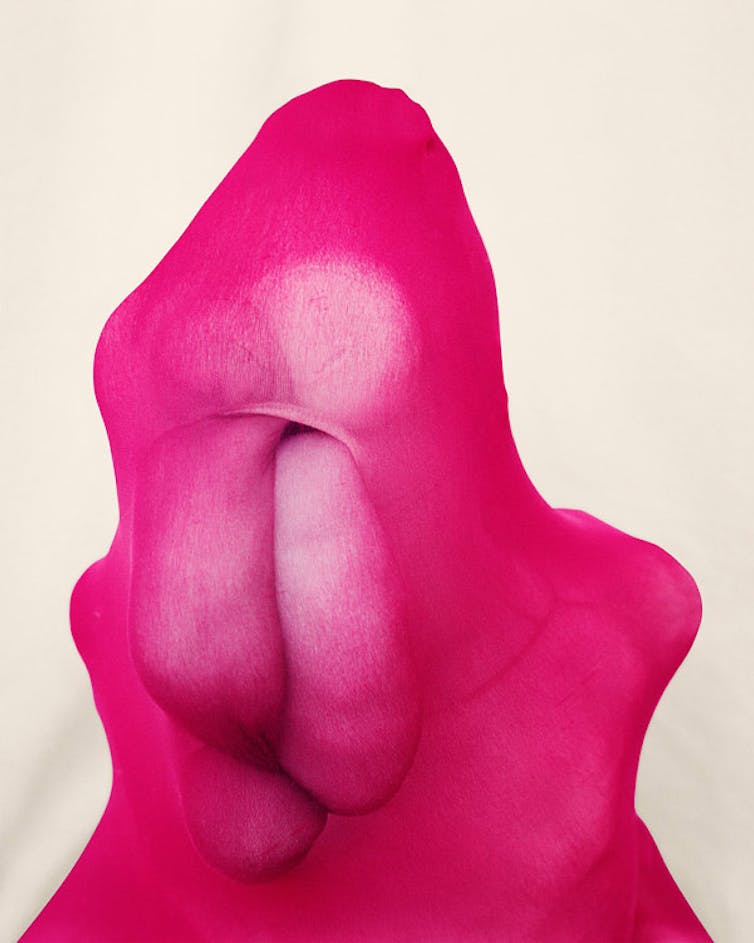 People can find the body disturbing, especially when it is a woman’s body performing in ways that challenges social expectations of the private and the public.

But what of fake bodies? In the far corner of the exhibition is an iconic Cindy Sherman work Untitled #255 (1992), featuring a mannequin doll equipped with anatomically detailed sexual parts.

The doll is crouched on her knees with a ready and waiting plastic orifice. Her pose reminded me of an instructional video I once watched on how to give birth.

All our stories begin at the site of the female body.