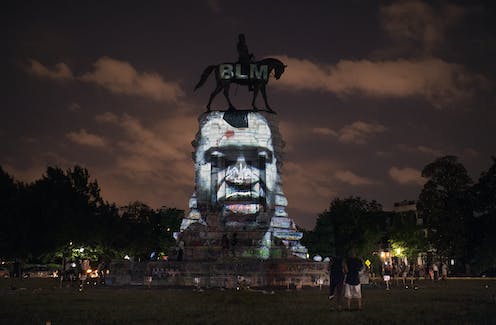 A controversial statue of Robert E. Lee will remain in place in Richmond, the former capital of the American Confederacy –- at least temporarily.

On June 18, a judge extended an injunction barring the removal of the Confederate general’s statue, stating that “the monument is the property of the people,” not the state of Virginia, which seeks its removal.

In early June Virginia Gov. Ralph Northam vowed to dismantle the prominent Lee statue in Richmond, the state capital, following sustained, nationwide protests over police brutality and racism. That plan was blocked by a 10-day court injunction – now extended through late July – based on the petition of a man whose ancestor, Otway Allen, gave Virginia the land the the sculpture sits on.

In his petition, William C. Gregory claimed that dismantling the Lee statue would violate the conditions of his great-grandfather’s 1890 land deed, which says Virginia “will faithfully guard it and affectionately protect it.”

Richmond isn’t the only Virginia city where a centuries-old land deed is a legal hurdle in removing monuments to men that many see as defenders of white supremacy. Nearby Charlottesville has faced similar questions about the intentions of the philanthropist who donated its contested Robert E. Lee statue.

Richmond’s Lee sculpture sits atop a pedestal on a traffic circle at the gateway to Monument Avenue, an architectural paean to white Richmonders’ long tradition of gracious, segregated living.

The land was a gift to the state from real estate investor Otway S. Allen and his sisters, Bettie F. Allen Gregory and Martha Allen Wilson. The donors hoped that putting the monument on the tree-lined boulevard would hasten development of the prestigious, whites-only residential neighborhood planned for the area.

Back in the 19th century, the Lee monument was on the outskirts of the city. Over the next 40 years, four more Confederate monuments were erected along the avenue, which traverses what is now central Richmond.

In his injunction request, Gregory claimed that removing the statue would cause “irreparable harm” because his family “has taken pride for 130 years in this statue resting upon land belonging to his family.” 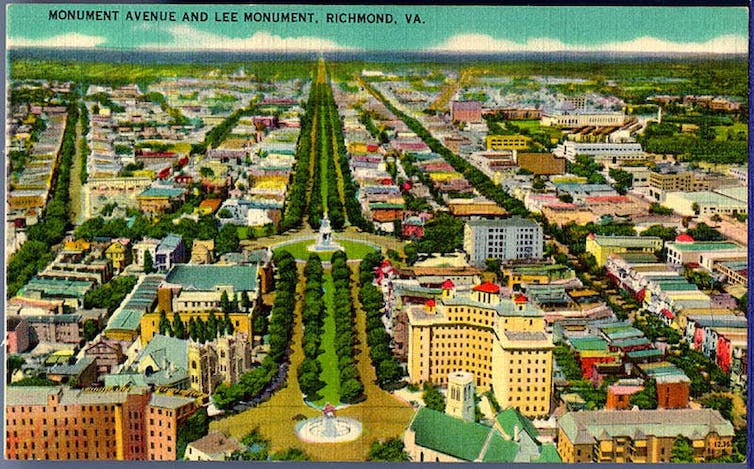 A Richmond postcard from the early 20th century.VCU Library Commons

To many locals, especially black Richmond residents, the sculptures have always been colossal reminders of the South’s history of enslavement and the violence wrought on black lives. The governor and city leaders now seemingly agree, saying that monuments glorifying the region’s white supremacist history should not displayed on public land.

Nevertheless, Richmond’s Lee statue still has its defenders. On June 15, six Monument Avenue homeowners filed their own separate lawsuit to block its removal, claiming that dismantling the “priceless work of art” would lead to the “degradation of the internationally recognized avenue on which they reside.”

An hour away in Charlottesville, another Robert E. Lee statue has been embroiled in legal challenges since 2017, when a city council vote for its removal triggered a deadly white supremacist rally.

Charlottesville’s statue was a gift of a prominent local philanthropist, Paul Goodloe McIntire. McIntire, born during the Civil War, was the son of the Charlottesville’s mayor when the city surrendered to General Custer’s Union troops in 1865.

McIntire made his money on the stock exchanges in Chicago and New York before returning to Charlottesville, a city shaped by his philanthropy. Funding Charlottesville’s first library and building an amphitheater for the University of Virginia, McIntire earned the sobriquet“princely giver” of gifts.

In 1918 McIntire donated land to the city for use as a public park, to be called Lee Park. The deed stipulated that a sculpture of the Virginia-born Confederate general, commissioned and paid for by McIntire, would be installed and maintained.

Among other objections to the statue’s removal, the Sons of Confederate Veterans, the Monument Fund and a small group of local citizens cited this land deed in their successful March 2017 legal complaint. They claimed that removing the statue would violate the terms and conditions of McIntire’s gift. 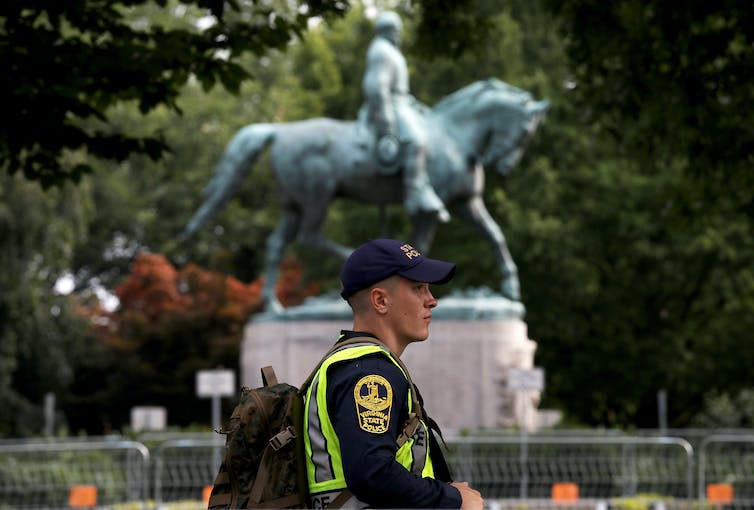 Since 2017 Charlottesville’s contested Lee statue has been alternately shrouded in black, barricaded and given police protection.Win McNamee/Getty Images

Courts side with progress

Both Virginia lawsuits argue that the land donors’ original wishes are inviolable.

But my legal research on charitable gifts shows that donor wishes are not always set in stone, so to speak. Under state law, Virginia’s included, courts can modify gift conditions when fulfilling them is no longer possible or practicable.

Gifts with problematic racial restrictions and segregationist intentions have troubled many American institutions, from nursing homes established by donors to benefit elderly, white Presbyterians to church scholarships mandated to fund white students only. 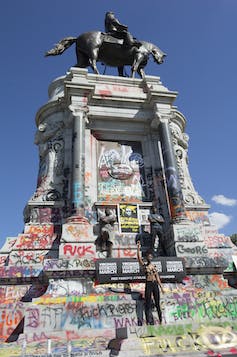 In such cases, judges have often declined to preserve the outdated wishes of long-dead donors, allowing discriminatory gift conditions to be eliminated. That renders the gifts usable in the modern era.

Rice University, for example, was founded in 1912 with a charitable bequest on the condition that the school educate only “the white inhabitants of Houston, and the state of Texas.” In 1963, seeking to integrate the university, Rice trustees filed a motion to modify the racial restrictions.

Despite opposition by a group of alumni who sought to keep the school segregated, the court concluded that strict adherence to the donor’s racial restrictions was no longer practicable and that the terms of Rice’s charter could be modified to admit black students.

On July 23, a Richmond court is expected to hold a new hearing to determine whether land given to Richmond by a private citizen making a very public statement about Southern racial inequality can instead be used to celebrate new and different histories.

This is an updated version of a story originally published June 17, 2020.

Allison Anna Tait does not work for, consult, own shares in or receive funding from any company or organization that would benefit from this article, and has disclosed no relevant affiliations beyond their academic appointment.