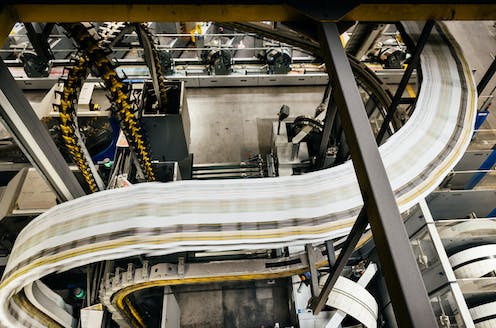 More than two dozen newsrooms have shut down and stopped the presses during the pandemic. Tom Werner/Getty

The news business, like every other, is struggling amid the coronavirus pandemic. The economic crisis has forced more than two dozen small-town newsrooms to shut down and has accelerated media job losses – including hundreds of layoffs at outlets as varied as Condé Nast, BuzzFeed, Vice, The Economist, and virtually every newspaper chain.

As a result, publishers have been among those in line to apply for loans from the Paycheck Protection Program, an emergency funding package administered by the federal Small Business Administration.

News organizations have received millions in coronavirus stimulus aid. The Corporation for Public Broadcasting received US$75 million from the Coronavirus Aid, Relief, and Economic Security Act (CARES Act), which it planned to distribute to public media across the country. The Seattle Times received $10 million. Axios, a well-respected inside-the-Beltway political news outlet, received $4.8 million. The list goes on and includes The Conversation, which received $367,000.

But of course, journalism isn’t just any other business. It comes with a First Amendment culture that situates the press as, among other things, an independent government watchdog, an institution that’s supposed to keep its distance from other power centers.

Does taking government money mean editors, broadcasters and publishers owe the government something? Do these grants create a conflict of interest in an industry whose credibility rests on its independence? 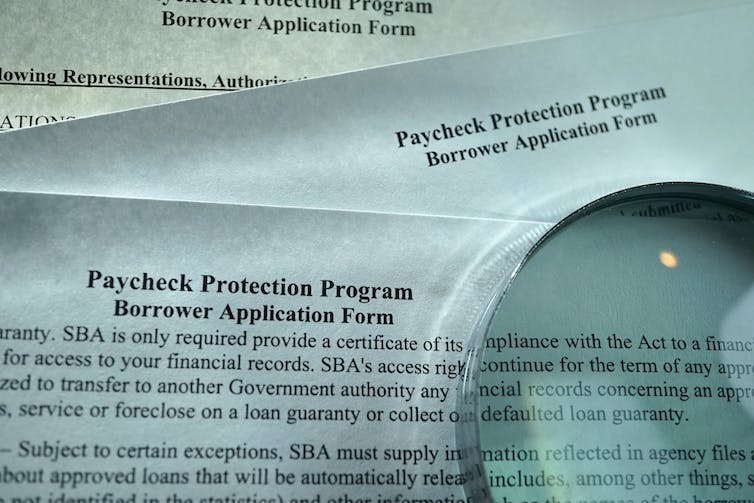 Does taking money from the government compromise journalists?Kameleon007/Getty

In a Wall Street Journal story about the Paycheck Protection Program, an executive at Gannett Co., the country’s largest newspaper chain, with 261 daily papers, was quoted as saying, “We are always open to considering ways to sustain journalism. However, we would never allow ourselves to be perceived as dependent on or influenced by government funding.” Parent companies such as Gannett, which own multiple news outlets across the country, are presently not eligible for PPP aid. But the concern for independence continues to be a driving one at such companies.

Soon after receiving PPP money, Axios decided to return it, saying “the program has become divisive, turning into a public debate about the worthiness of specific industries or companies,” and that an alternative source of capital for Axios had emerged.

Journalism professionals and supporters are right to be concerned about the conflict-of-interest questions raised by PPP support. In journalism, credibility is paramount: If audiences no longer see journalists as reliable sources of independent news, the whole enterprise is questioned.

This is why corporate media ownership is a serious ethical concern – parent companies (i.e., Walt Disney) are tempted to harness their media outlets (i.e., ABC News) to promote other corporate products (i.e., books, movies and music from Disney-owned publishers, studios and record labels).

The concern to protect credibility is also why individual journalists routinely refrain from being active in issues they cover, such as politics. Journalistic credibility also is protected in part by keeping an arms-length relationship with any person or group, including government, that might have an interest in shaping the news or try to leverage favorable treatment with access, junkets, scoops – or stimulus aid.

But as a former journalist and a media ethics scholar who has deeply explored such ethical dilemmas, I suggest that PPP aid need not undermine journalistic credibility.

In the news business, conflicts of interest have historically been taken quite seriously, since they can undermine the very heart of the enterprise: journalistic credibility.

Countless conflict-of-interest policies, both in the public and private sector, are intended to protect journalistic autonomy and credibility in varying ways – from explicit requirements to avoid conflicts, to requirements to at least disclose them.

Since 1896, when New York Times owner Adolph S. Ochs declared his paper would report the news “without fear or favor,” most reporters, editors, broadcasters and publishers have been keenly aware that they can lose the faith of their audiences if their news reports are perceived as driven by special interests.

Almost all mainstream news organizations have clear conflict-of-interest guidelines. The newsroom at most outlets doesn’t talk to the advertising department – a divide long considered a “church and state” separation to ensure advertisers don’t get special news treatment. Politics reporters are not allowed to participate in political events or have political bumper stickers on their cars. 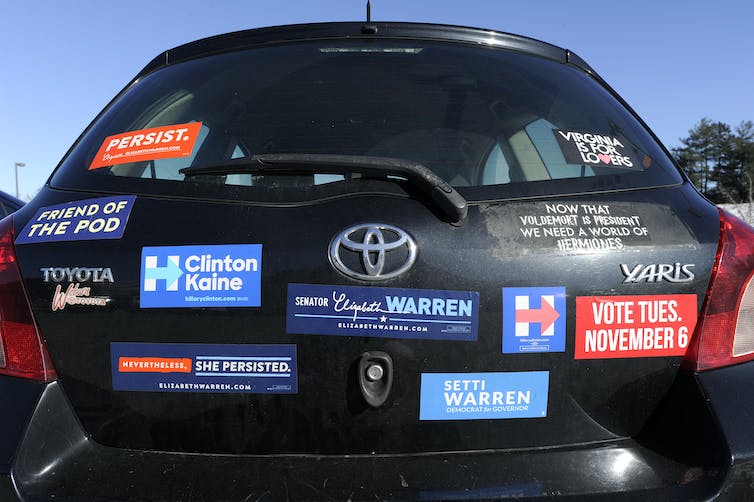 This is not likely to be a journalist’s car.Joseph Prezioso//AFP via Getty Image

Despite all this professional rhetoric, journalistic independence has regularly been called into question and undermined. Perceived conflicts such as corporate ownership, coddling of advertisers, and favoritism regularly crop up, and special interests influence news coverage in all kinds of ways.

The Washington Post has been criticized for the apparent conflict posed by its sale to Amazon executive Jeff Bezos. Bezos has insisted on a hands-off approach to the newsroom, and while Amazon-related Post stories often disclose Bezos’ ownership, the bigger concern is the unwritten culture created by the arrangement. Post journalists may be less inclined to see Amazon practices as newsworthy because of Bezos’ largesse.

Getting aid from the federal government to help stay in business ought to concern any self-respecting journalist. But forgoing the stimulus altogether is not the only, nor even the best, option.

Many conflicts can be managed responsibly. While a concern on its face, the ethical question posed by receiving PPP money from the federal Small Business Administration is not the same as that posed by revenue from advertisers who might want to coerce friendly news coverage.

Regarding the latter, such concerns about conflicts of interest are troubling precisely because they tend to pose ongoing threats to journalistic independence: run a story anytime in the future that displeases the company, and they will pull their advertising or, at public media outlets, their sponsorship.

The case of PPP aid is both much more diffuse and a one-off occurrence: It is difficult to discern the news “agenda” that such a sprawling government bureaucracy – one intended as more of an administrative body than a policymaking office – might attach to a one-time disbursement of aid.

And what is the threat to journalistic independence posed once the money is disbursed?

Short of a blatant refund demand after an unflattering story about PPP administrator the Small Business Administration, which seems unlikely, there would be little leverage available to the SBA such as that with ongoing advertising contracts. A local auto dealership can pull its advertising out of punitive pique, and that would be the end of the matter; a federal agency attempting to do so would run squarely into strong First Amendment prohibitions.

What journalistic recipients of PPP money can and should do is to be fully transparent to audiences. Publishers should disclose their motive for applying to the program and how the money is spent. They should invite public discussion of any conflict-of-interest concerns, and announce steps in case a conflict involving news coverage arises (such as promises to include a disclosure in stories involving the SBA).

Perceived, as well as actual, threats to journalistic independence should never be taken lightly. But the apparent conflict of interest posed by PPP aid to newsrooms can be managed by transparency, rather than outright avoidance.

This story has been updated to state the proper source of the government funds – the CARES Act – given to the Corporation for Public Broadcasting.

The Conversation has received funds from the Paycheck Protection Program.

Patrick Lee Plaisance does not work for, consult, own shares in or receive funding from any company or organization that would benefit from this article, and has disclosed no relevant affiliations beyond their academic appointment.