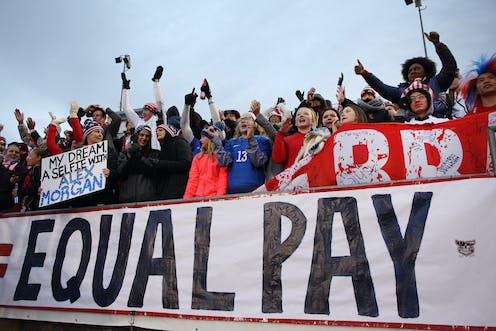 The U.S. women’s soccer team reported being “shocked and disappointed” by a federal judge’s dismissal in May of the team’s lawsuit against the U.S. Soccer Federation.

The lawsuit alleged discriminatory pay practices by the federation between its men’s and women’s team, which seemed especially unfair because the women’s team was so successful compared to the men’s team. The U.S. women’s soccer team dominated the 2019 FIFA Women’s World Cup tournament last summer, taking a record fourth World Cup title.

The U.S. men’s soccer team, on the other hand, failed to qualify for the World Cup in 2018.

On June 24, the federal judge denied the women’s team request to immediately appeal their equal pay claim. Members of the U.S. women’s soccer team are the first professional athletes in the United States to return to sports when the National Women’s Soccer League began its Challenge Cup on June 27.

I study employment discrimination and inclusion – and I wasn’t as surprised as the members of the women’s team. That’s because their claims were made under the Equal Pay Act and Title VII of the Civil Rights Act of 1964.

Despite the purpose of the laws – protecting employees from discrimination in the workplace based on specific characteristics – both are particularly hard to use to prove pay discrimination.

The EPA rejects deviations in responsibilities – for example, the deviation in the women playing more games – and Title VII requires a “similarly situated” individual, or someone who has the same situation as the women soccer team but are paid better. These evidentiary requirements often work to undermine gender pay discrimination claims. 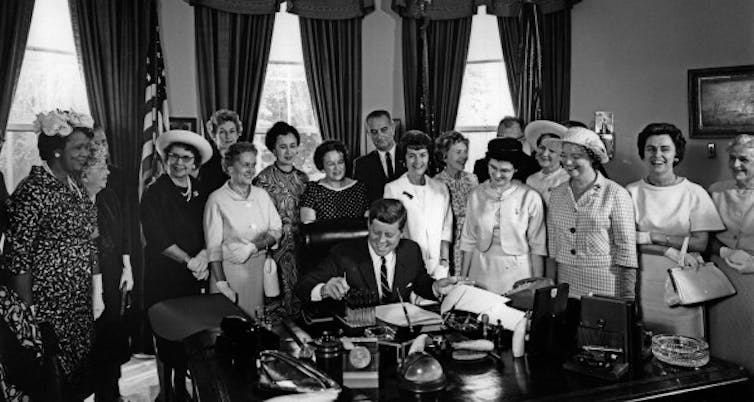 The history of women’s rights

This year marks 100 years since the ratification of the 19th Amendment gave women the right to vote. The suffrage movement is early evidence of the conflict between those who supported a role for women outside the home and the anti-suffragists who were concerned about the loss of privilege for women and elevated status of motherhood if they became embroiled in politics.

Similar concerns were expressed in the 1908 decision by the U.S. Supreme Court Muller v. Oregon. The court endorsed limiting the role of women in the workplace, emphasizing the protection of women for the larger purpose of preserving the “well‐being of the race.” As a result, states were permitted to enact a range of laws that restricted women’s ability to work outside the home in a way that men were not restricted.

Women did not voluntarily enter the workforce in large numbers until during World War II. When this happened, the prevailing policy of protective legislation drew more detractors.

The idea of equal rights began to receive more attention as the language of the Equal Rights Amendment, originally drafted in 1923, gained additional support. The notion of equality for women in the workplace advanced in public policy discussions when President John F. Kennedy established the Commission on the Status of Woman in 1961, appointing Eleanor Roosevelt as the chairwoman.

The final report of the commission, often referred to as the Peterson Report after Esther Peterson, assistant secretary of labor and director of the U.S. Women’s Bureau, was published in 1963. Although the Peterson Report avoided the most controversial issue of the day, the Equal Rights Amendment, it nonetheless chose the path of moving away from protecting women’s position in the home as mothers and toward equality.

The Equal Pay Act, enacted in 1963, is the first federal legislation reflecting the equal employment opportunities advocated by the commission.

The EPA prohibits discrimination based on gender in wages paid for the same job. Determining when jobs are the same is often when it becomes difficult, as was the case in the U.S. women’s soccer team case.

As described in the law, “equal work” means “the performance of which requires equal skill, effort, and responsibility, and which are performed under similar working conditions.” For the soccer teams, collective bargaining agreements negotiated between the players’ associations and U.S. Soccer created significantly different pay structures with significantly different job requirements, such as number of games played.

Even absent the soccer teams’ collective bargaining agreements, the EPA has a number of exceptions to its equal pay mandate.

Exceptions to equal pay include, “a seniority system; a merit system; a system which measures earnings by quantity or quality of production; or a differential based on any other factor other than sex.” This final “any factor other than sex” is often used by courts to determine that the pay disparity between jobs is nondiscriminatory. 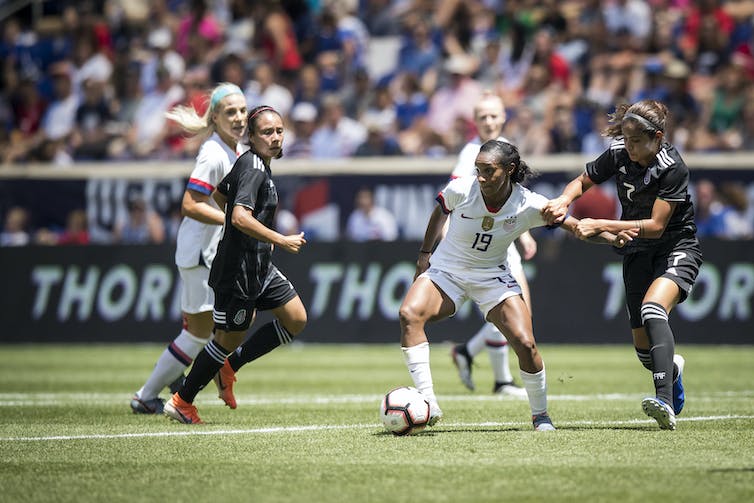 Congress enacted Title VII in 1964 to address employment discrimination based on race, color, religion, sex and national origin. Title VII continued the concept of equality to mean that of “sameness.”

To prove their claim of wage discrimination, the women’s soccer team had to identify men who were “similarly situated” to them but paid better, a “comparator” to show that their pay was discriminatory.

Since the men’s soccer team was determined by the court to not be “similarly situated” to the women’s soccer team in pay based on collective bargaining agreements and different requirements for games and friendlies – such as exhibition matches – the pay claim failed.

The judge allowed two claims of discrimination made by the women’s soccer team against their employer, the U.S. Soccer Federation, to continue to trial. The women’s team identified different treatment than the men’s team in travel conditions – specifically charter flights and hotel accommodations – and medical and training support.

Though Congress adopted a path of equality in both the EPA and Title VII, in the decades that followed, “any factor other than sex” meant nonperformance-based factors such as differences in academic degrees led to dismissal of EPA claims and an inability to find the same or “similarly situated” individual – because of differences in supervisors, job evaluations or discipline records – became a barrier to equal pay under Title VII. This has allowed the gender pay gap to remain almost 60 years after the EPA and Title VII became law.

The gap is more pronounced for women who have children, often referred to as the “motherhood penalty.”

I would argue that the focus on “sameness” in equality has failed to offer progress in building diversity and inclusion in organizations, including addressing the wage gap. A normative workplace is one that does not recognize differences in how someone can be successful.

All people are not the same and organizations that level the playing field offer different people different tools or support to succeed. A stand-up desk for one and a left handed workstation for another, for example.

Leveling the playing field generates equity. Given the evidentiary requirements of the EPA and Title VII, a level playing field has not happened through federal legislation but many organizations now promote a culture of equity.

The four-time World Cup champions U.S. women’s soccer team created renewed awareness about the intransigence of gender pay discrimination and the dismissal of its pay claim in the federal court highlights the limits of current legislation but should further the discussion of equity. This would mean avoiding one-size-fits-all workplaces and rewarding those who respond with dominating performances.

Julie Manning Magid does not work for, consult, own shares in or receive funding from any company or organisation that would benefit from this article, and has disclosed no relevant affiliations beyond their academic appointment.