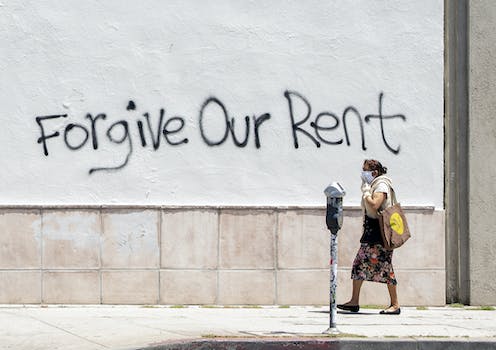 The United States is on the verge of a potentially devastating eviction crisis right in the middle of a deadly pandemic.

Federal, state and local eviction moratoriums had put most of the pending cases on hold. But as the moratoriums expire and eviction hearings resume, millions of people are at risk of losing their homes.

That’s because the court process is heavily skewed towards the needs of landlords and offers few protections for tenants – a problem that has been going on for decades, as my ongoing research on the process of evictions shows.

Early in the pandemic, as states shut down their economies, tens of millions of people lost all or part of their incomes, with poorer Americans suffering the greatest losses.

Worried about a wave of evictions, the federal government and many cities and states imposed moratoriums in an effort to prevent a crisis. Some states went further and provided financial assistance directly to renters, while Congress provided aid in the form of economic impact checks and enhanced unemployment benefits.

Financial assistance to tenants is important because landlords have also been hurt by the economic effects of the pandemic. Part of preventing an eviction crisis and maintaining affordable housing means helping tenants pay their rent in order to ensure that landlords can pay their mortgages and other costs.

All this aid has helped ensure greater financial and housing stability for people affected by COVID-19. But the federal benefits have now expired, and many eviction moratoriums have lapsed or will do so soon. As a result, as many as 26 million people are believed to be at risk of losing their homes in the coming months.

This comes on top of the many other economic and health effects of the pandemic that have hit low-income Americans – especially women of color who have children – the hardest.

Unfortunately, not even an extension of the moratoriums or financial assistance alone can solve this problem. Eventually, tenants will have to pay back their landlords and, if they can’t, will have to go to court to avoid losing their homes. In most cases, they’ll lose.

A process that favors landlords

The reason why has historical roots in land disputes from feudal England, a far cry from the modern landlord-tenant relationship.

In the late 19th and early 20th centuries, as states began to codify eviction laws and procedures, lawmakers wanted a way to encourage the judicial resolution of disputes about who was entitled to possession of a piece of property. Some lawmakers feared that landlords would literally run tenants off of properties at gunpoint or engage other forms of extralegal self-help.

In order to require landlords to come to court instead of taking matters into their own hands, every state eventually created a “summary process” for eviction matters, which allows a landlord to regain possession more quickly than the court process would otherwise permit.

Summary process, which means it must take place without delay, sped up evictions by changing other aspects of the normal civil litigation process that had benefited tenants facing eviction. For example, many states such as Tennessee and Texas now allow eviction cases to move from complaint to trial in as few as six days, while some prohibit jury trials.

In a Supreme Court case in 1972 that upheld the constitutionality of the summary process, justices noted that having only six days between complaint and trial was not a due process violation for tenants because “tenants would appear to have as much access to the relevant facts as their landlord.”

Many tenants would dispute this characterization. Often the tenant is precluded from using common legal tactics available in civil court cases. In most states, a tenant can’t seek documents from the landlord through discovery without the permission of the judge. Judges can also deny tenants the right to assert counterclaims, even if they are directly related to the tenancy – such as the landlord’s failure to make repairs.

These concessions to judicial expedience limit the tenant’s ability to mount an effective defense against the landlord’s allegations, with the express purpose of making eviction easier for the landlord. And most tenantswill not have a lawyer, while their landlords almost certainly will.

While there are a few states, such as New York and Illinois, where there are more legal protections for tenants, on the whole, the system is stacked heavily in favor of landlords.

Consequences of a crisis

Tenants who go through eviction court not only could lose their homes, but the final judgment also becomes a black mark on their credit reports, making it more difficult for them to obtain safe and affordable housing in the future.

The current court process is not designed to account for these consequences, especially on the mass scale resulting from the pandemic. And with a few exceptions, most states have not adjusted or modified the process to make it easier for tenants to maintain their homes.

Federal and state governments are debating extending moratoriums and providing additional aid as the pandemic continues to rage in many parts of the U.S. While I agree that additional relief is vital, in my view the eviction court process itself needs urgent reform.

Without changes, Americans may experience a level of economic instability and homelessness not seen since the Great Depression.

Kathryn Ramsey Mason receives funding from the Urban Child Institute, a foundation in Memphis aimed at furthering kindergarten readiness and third-grade literacy for children. With this funding, the Medical-Legal Partnership Clinic at the University of Memphis provides free legal representation to low-income families in a variety of civil legal matters, including for tenants at risk of eviction.