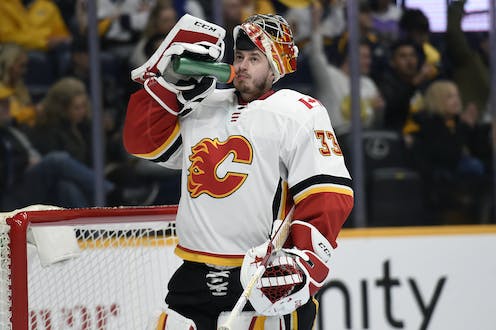 A Czech-born goaltender for a Canadian hockey team wears a jersey recalling the 1864 burning of Atlanta, Georgia.AP Photo/Mark Zaleski

As the National Hockey League gets its abbreviated season back underway, a team with a name hearkening back to the Civil War will take the ice – in Canada.

In September 1864, having conquered the city of Atlanta, U.S. Maj. Gen. William Tecumseh Sherman proposed marching his army to the coastal city of Savannah, Georgia, destroying railroads, factories, farms and other major sources of Confederate power along the way. Sherman’s March to the Sea was an example of a military strategy called, in Sherman’s words, the “hard hand of war,” in which an army destroys not only military targets but takes supplies from the residents, leaving the civilian population demoralized and short of food and shelter.

In 2017, I was in Calgary, Alberta, Canada, for a conference, when I took an opportunity to see a hockey game between the Calgary Flames and the Ottawa Senators. There, as I sat high up in the seats with a beer and a burger, the word “Flames” was in the air, and a light show depicted flames on the ice and around the arena’s perimeter. I wondered if I, an early American historian, was the only person in the place thinking about how a 21st-century hockey team connected with Gen. Sherman’s 1864 Atlanta campaign and the destructive journey to Savannah. 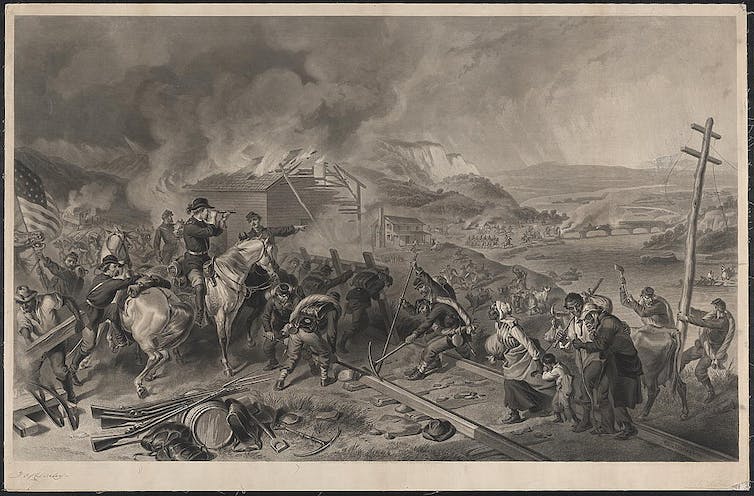 There were actually two conflagrations of Atlanta – one that was authorized and another that was not.

The Sherman-authorized burning targeted Confederate military resources, including machine shops, railroad depots and arsenals. When the fires reached munitions housed in a machine shop, the explosion made the Atlanta night “hideous,” Sherman wrote.

Despite orders that nonmilitary structures not be torched, Union soldiers drunk with either rage or with spirits went on to burn much more. As the fire spread, Sherman noted that “the heart of the city was in flames all night.”

When Sherman and his army rode out of Atlanta on the morning of November 16, 1864, he and others looked back “upon the scenes of our past battles.” There stood Atlanta, Sherman recalled, “smouldering and in ruins, the black smoke rising high in air, and hanging like a pall over the ruined city.”

As they left the ruined city behind, a band “struck up the anthem of ‘John Brown’s soul goes marching on’; the men caught up the strain, and never before or since have I heard the chorus of ‘Glory, glory, hallelujah!’ done with more spirit, or in better harmony of time and place.”

Ulysses S. Grant, the Union commander who would later become the 18th president of the United States, commented in his memoirs that Gen. Sherman’s Atlanta campaign “was managed with the most consummate skill” and “was one of the most memorable in history.” Grant, like others, argued that its success contributed to Abraham Lincoln being elected to a second – and, as it turned out, fatal – term. “The news of Sherman’s success reached the North instantaneously, and set the country all aglow,” Grant wrote. 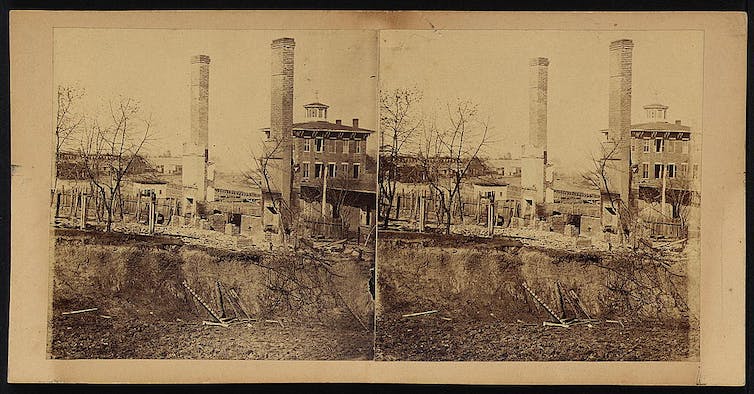 In November 1864, downtown Atlanta stood in ruins, with chimney stacks showing where buildings used to be.George N. Barnard/Library of Congress

Southerners, of course, saw Sherman’s fiery and destructive march differently. Southern writer Eliza Andrews, then 24, wrote in her journal during the war that “The dwellings that were standing all showed signs of pillage, and on every plantation we saw the charred remains of the gin-house and packing-screw, while here and there, lone chimney-stacks, ‘Sherman’s Sentinels,’ told of homes laid in ashes. The infamous wretches[!]”

According to Sherman biographer James Lee McDonough, Sherman’s name would “come to symbolize that terrible time in Atlanta, when a deep and lasting scar, which rankles to this day, was created in the hearts of many Southerners.”

A wound that still burns

More than a century later, the National Hockey League decided to add a team in Atlanta, as well as one in New York. To select a name for the Atlanta team, its owner, the real-estate developer and owner of the Atlanta Hawks basketball team, Tom Cousins, held a contest in 1971 that received 10,000 entries.

The name chosen was “Flames,” though hockey writer Stephen Laroche notes in his book “Changing the Game: The History of NHL Expansion,” that it got only 198 of the total ballots.

Even in the early 1970s the memory still burned of Union troops under Sherman’s command setting fire not only to factories, farms and warehouses but also to homes and shops in the city center that were destroyed in the unauthorized fire. 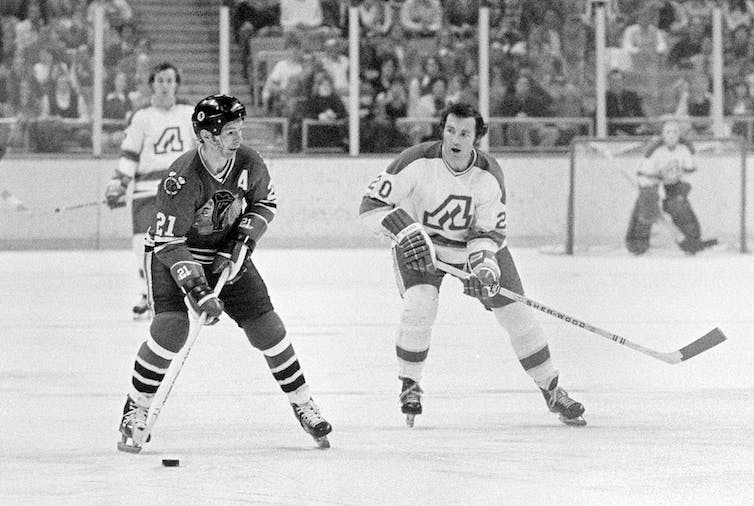 By bringing the Atlanta Flames into the NHL, the league began its own march into the South. It was a slow start, but the sport would eventually win over fans in the former Confederacy. In the 2020 season, the NHL has teams in Tennessee, North Carolina, Texas and Florida – which has two.

A group of Canadian businessmen led by Nelson Skalbania bought the Flames and moved the team to Calgary after the 1979-1980 season. They kept the name because some of the team’s new owners were in the oil industry, which is also associated with flames. 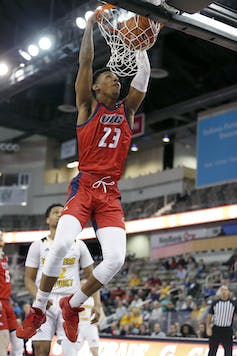 The University of Illinois at Chicago Flames are named for a different fire.Jeffrey Brown/Icon Sportswire via Getty Images

Naming a sports team after a destructive event may seem peculiar. Strangely, it is not – especially when it comes to destruction by fire. I’m writing from a suburb of Chicago, where the Great Fire of 1871 killed 300 people, destroyed more than 18,000 buildings, and left homeless more than 100,000 people – a third of the city’s population. It also provided scorching monikers for the professional soccer team, the Chicago Fire, the University of Illinois at Chicago Flames and the short-lived World Football League team from Chicago, also called the Fire for its one and only season in 1974.

Also, the Colorado Avalanche, the Carolina Hurricanes, and the Iowa State Cyclones are all named after devastating natural forces.

The Atlanta Flames were unique, however, for being named after an intentional destructive event, not a force of nature or a natural tragedy.

The Civil War echoes elsewhere in the NHL, too, with the Columbus Blue Jackets – the only team from Sherman’s home state of Ohio – which celebrates the Blue Jackets’ goals with booming cannon fire. As professional hockey resumes across North America, even fans newly aware of the country’s struggle with the legacy of slavery may not be thinking about their Civil War history. But the team names are there to remind them anyway. 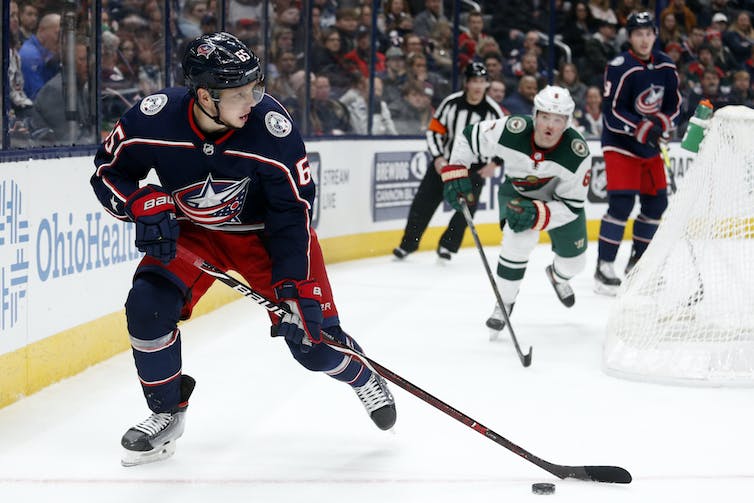 Are the Columbus Blue Jackets still fighting for the Union?AP Photo/Paul Vernon

Christopher J. Young does not work for, consult, own shares in or receive funding from any company or organization that would benefit from this article, and has disclosed no relevant affiliations beyond their academic appointment.

Authors: Christopher J. Young, Assistant Vice Chancellor for Academic Affairs, Director of the Center for Innovation and Scholarship in Teaching and Learning, and Professor of History, Indiana University