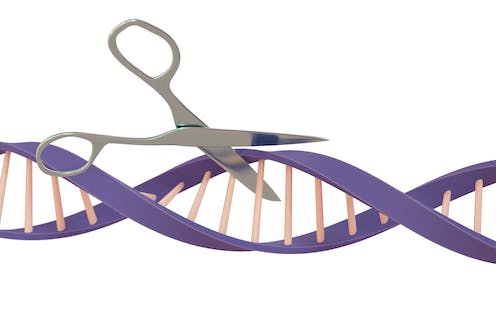 Even as the COVID-19 pandemic cripples the economy and kills hundreds of people each day, there is another epidemic that continues to kill tens of thousands of people each year through opioid drug overdose.

Opioid analgesic drugs, like morphine and oxycodone, are the classic double-edged swords. They are the very best drugs to stop severe pain but also the class of drugs most likely to kill the person taking them. In a recent journal article, I outlined how a combination of state-of-the-art molecular techniques, such as CRISPR gene editing and brain microinjection methods, could be used to blunt one edge of the sword and make opioid drugs safer.

I am a pharmacologist interested in the way opioid drugs such as morphine and fentanyl can blunt pain. I became fascinated in biology at the time when endorphins – natural opioids made by our bodies – were discovered. I have been intrigued by the way opioid drugs work and their targets in the brain, the opioid receptors, for the last 30 years. In my paper, I propose a way to prevent opioid overdoses by modifying an opioid user’s brain cells using advanced technology.

Opioids kill by stopping a person from breathing (respiratory depression). They do so by acting on a specific set of respiratory nerves, or neurons, found in the lower part of the brain that contain opioid receptors. Opioid receptors are proteins that bind morphine, heroin and other opioid drugs. The binding of an opioid to its receptor triggers a reaction in neurons that reduces their activity. Opioid receptors on pain neurons mediate the pain-killing, or analgesic, effects of opioids. When opioids bind to opioid receptors on respiratory neurons, they slow breathing or, in the case of an opioid overdose, stop it entirely. 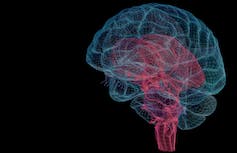 The brainstem is the the red part protruding from the bottom of the brain.MedicalRF.com / Getty Images

Unlike laboratory mice, humans cannot be altered when embryos to remove all opioid receptors from the brain and elsewhere. Nor would it be a good idea. Humans need opioid receptors to serve as the targets for our natural opioid substances, the endorphins, which are released into the brain during times of high stress and pain.

Also, a total opioid receptor knockout in humans would leave that person unresponsive to the beneficial pain-killing effects of opioids. In my journal article, I argue that what is needed is a selective receptor removal of the opioid receptors on respiratory neurons. Having reviewed the available technology, I believe this can be done by combining CRISPR gene editing and a new neurosurgical microinjection technique.

CRISPR, which is an acronym for clustered regularly interspaced short palindromic repeats, is a gene editing method that was discovered in the genome of bacteria. Bacteria get infected by viruses too and CRISPR is a strategy that bacteria evolved to cut-up the viral genes and kill invading pathogens.

The CRISPR method allows researchers to target specific genes expressed in cell lines, tissues, or whole organisms, to be cut-up and removed – knocked out – or otherwise altered. There is a commercially available CRISPR kit which knocks out human opioid receptors produced in cells that are grown in cell cultures in the lab. While this CRISPR kit is formulated for in vitro use, similar conditional opioid receptor knock-out techniques have been demonstrated in live mice.

How does one get the CRISPR opioid receptor knockout solution into a person’s respiratory neurons?

Enter the intracranial microinjection instrument (IMI) developed by Miles Cunningham and his colleagues at Harvard. The IMI allows for computer-controlled delivery of small volumes of solution at specific places in the brain by using an extremely thin tube – about twice the diameter of a human hair – that can enter the brain at the base of the skull and thread through brain tissue without damage.

The computer can direct the robotic placement of the tube as it is fed images of the brain taken before the procedure using MRI. But even better, the IMI also has a recording wire embedded in the tube that allows measurement of neuronal activity to identify the right group of nerve cells.

Because the brain itself feels no pain, the procedure could be done in a conscious patient using only local anesthetics to numb the skin. Respiratory neurons drive the breathing muscles by firing action potentials which are measured by the recording wire in the tube. When the activity of the respiratory neurons matches the breathing movements by the patients, the proper location of the tube is confirmed and the CRISPR solution injected.

The call for drastic action

With no opioid receptors on respiratory neurons, the opioid user cannot die from opioid overdose. After proper backing from National Institute on Drug Abuse and leading research and health care institutions, I believe CRISPR treatment could enter clinical trials in between five to 10 years. The total cost of opioid-involved overdose deaths is about US$430 billion per year. CRISPR treatment of only 10% of high-risk opioid users in one year would save thousands of lives and $43 billion.

Intracranial microinjection of CRISPR solutions might seem drastic. But drastic actions that are needed to save human lives from opioid overdoses. A large segment of the opioid overdose victims are chronic pain patients. It may be possible that chronic pain patients in a terminal phase of their lives and in hospice care would volunteer in phase I clinical trials for the CRISPR opioid receptor knockout treatment I propose here.

Making the opioid user impervious to death by opioids is a permanent solution to a horrendous problem that has resisted efforts by prevention, treatment and pharmacological means. Steady and well-funded work to prove the CRISPR method, first with preclinical animal models then in clinical trials, is a moonshot for the present generation of biomedical scientists.

Craig W. Stevens does not work for, consult, own shares in or receive funding from any company or organization that would benefit from this article, and has disclosed no relevant affiliations beyond their academic appointment.