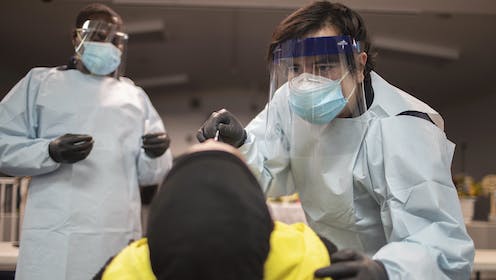 Researchers from the Centers for Disease Control and Prevention and other institutions recently published a study which estimated that the true number of people infected by COVID-19 could be six to 24 times higher than the number of confirmed cases. Melissa Hawkins, professor of public health at American University, explains what this large undercount means and why insufficient data is hampering the U.S.‘s ability to control the pandemic.

Melissa Hawkins explains the implications of the COVID-19 testing undercount.

What are some reasons for the large disparity between the true number of infected cases and the confirmed case count in the U.S.?

We just passed 4 million total confirmed cases and over 150,000 deaths. But those confirmed cases really only tell part of the story since we know the cases and deaths are undercounted due to lack of testing. Particularly at the beginning of the pandemic, only those with significant illness were tested and there were shortages and problems with the test.

We also know that there is a significant amount of asymptomatic spread that isn’t captured in those testing numbers, particularly in places that still lack access to widespread testing. Many researchers are attempting to model and estimate the true number of total cases and deaths. The CDC study that you’re citing – those estimates of a true infection rate range from eight to 10 times higher than the number of cases that are confirmed.

Were you surprised by the results of the study?

Testing is the foundation of a modern public health approach to controlling this virus. We have lots of tools in our tool kit, but at the very foundation is widespread testing. So is this surprise? No, because the U.S. has had problems with our testing from the very, very beginning and now we’re playing catch up.

We continue to play catch up to try to get an accurate understanding of where we are. Then contact tracing can help to limit the spread. But we can do better, and we need to do better with our testing capacity.

Is it good news that even though so many people have been infected, they’re not filling up hospital beds?

It remains that many cases are mild and are not severe enough to be hospitalized or cause severe illness.

And of course, that’s a good thing. The flip side of that is the ongoing spread. So when there are mild or asymptomatic cases and people don’t know that they’re sick, then that’s contributing to spread. If not identified, that keeps us in this situation even longer where we’re not containing the spread.

Does the high number of infected cases mean that we are close to reaching herd immunity?

Achieving herd immunity varies by disease. From what we know about SARS, which is close to the virus that causes COVID-19, it’s estimated that 60-70% of the population would need to be infected and have antibodies in order to reach herd immunity. That’s based on the basic R0 reproductive number, which indicates the average number of new people to whom a single infected person can spread the virus.

For context, the reproductive number of the flu is about 1.3 and SARS-CoV-2 is between 2 and 3, meaning it’s a highly contagious disease. So even at the higher end of the estimates that we expect the true number of cases to be, the majority of the country remains susceptible to the virus. Less than 5% of the U.S. population has been infected. 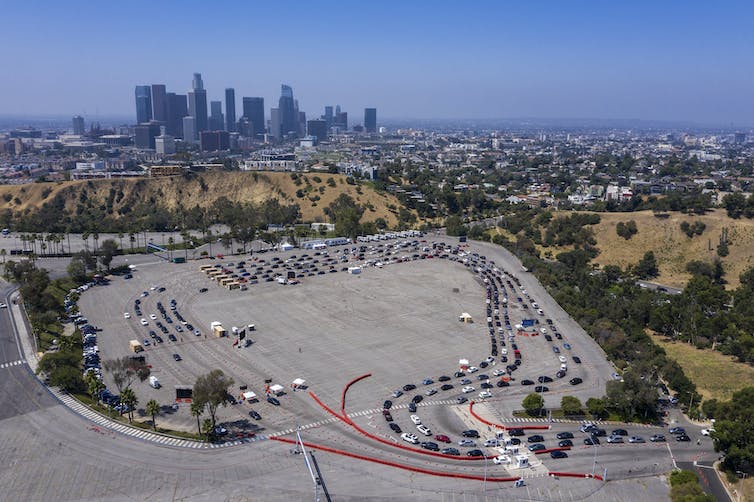 Hundreds line up for COVID-19 testing in the parking lot at Dodger Stadium in Los Angeles on July 8.Brian van der Brug/LA Times via Getty Images

So what does it take in order to reach herd immunity? It’s going to take a vaccine.

If a vaccine candidate passes the safety and efficacy trials and is considered a success, this would mean that people can have access to a vaccine that will be able to create immunity and prevent spread of the virus. Now, it’s also likely, as we’re learning about immunity and length of immunity, that a vaccine may need to be administered annually, similar to the way that the flu vaccine is an annual vaccine. But this still remains to be seen.

What can the U.S. do to reduce the disparity between the true number of infections and the confirmed case count?

The things that we know – universal mask wearing, frequent hand-washing and maintaining physical distancing. These things work. These are public health prevention tools that work.

Beyond individual behavior and ways we can protect ourselves, protect our community, and our loved ones is action at the state and federal level. There needs to be increased, accurate and rapid testing without a long lag time for results so people get results before there may be additional unintentional spread.