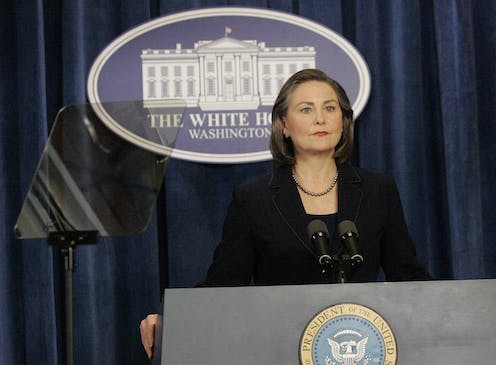 President Allison Taylor of '24' ends up being exposed as Machiavellian.20th Century Fox

Are these potential vice presidents supposed to be presidential lackeys or understudies to the leader of the free world? Should they actively seek the position, or be reluctant nominees bound by duty?

After Sen. Kamala Harris’ name emerged as a short-list favorite, CNBC reported that some Biden allies and donors “initiated a campaign against Harris,” arguing that she was “too ambitious” and would be “solely focused on eventually becoming president.”

Claiming that people who want to be president make bad vice presidents might seem ill-conceived if your audience is Vice President Joe Biden. And pundits and journalists quickly pointed out that the argument was racist and sexist – like, really, reallysexist.

So why were Democratic Party insiders spouting it?

One clue can be found in the way we tell stories about women politicians. In our book, “Woman President: Confronting Postfeminist Political Culture,” communication scholar Kristina Horn Sheeler and I examine how fictional and actual women presidential figures are framed in news coverage, political satire, memes, television and film. Our close reading of these diverse texts reveals a persistent backlash that takes many forms: satirical cartoons that deploy sexist stereotypes; the pornification of women candidates in memes; and news framing that includes misogynistic metaphors, to name a few.

But in our chapter on fictional women presidents on screen, we found something particularly relevant to the coverage of the Democratic Party “veepstakes.” Women who are politically ambitious are presented as less trustworthy than those who don’t actively seek the presidency. 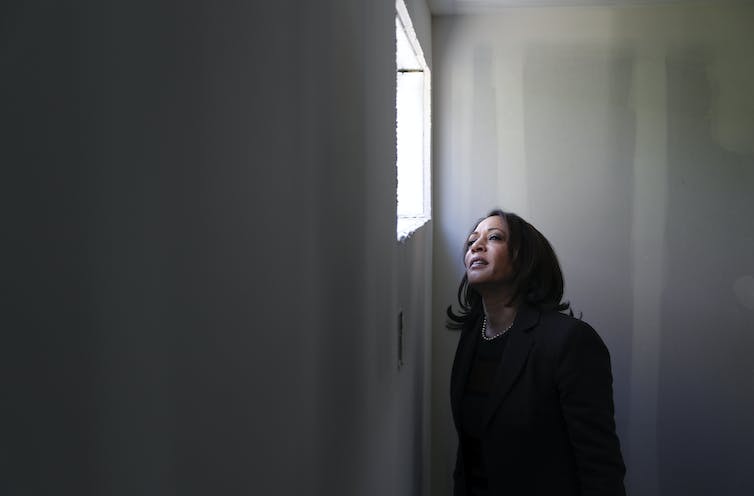 Sen. Kamala Harris is being attacked for trying to climb too high.AP Photo/John Locher

There have been seven series on U.S. television that follow a woman president for at least one full season: ABC’s “Commander in Chief”; the Sci-Fi Channel’s “Battlestar Galactica”; Fox’s “24”; CBS’ “Madam Secretary”; Fox 21’s “Homeland”; Netflix’s “House of Cards”; and HBO’s “Veep.”

It may seem like a small point, but when showrunners want to create a “likeable” woman president, they go out of their way to demonstrate that pursuing the presidency isn’t her life’s goal.

The women presidents in “Commander in Chief” and “Battlestar Galactica” didn’t campaign for the office. They ascended to the presidency as a result of tragedy. In the former, the president dies of a brain aneurism; in the latter, a nuclear attack takes out the first 42 people in the presidential line of succession, leaving the secretary of education to fill the role. (To be fair, this did seem like a woman’s likeliest path to presidential power in 2004.) Each character is portrayed as an ethical and effective leader – not perfect, but plausibly presidential.

Conversely, series like “24” and “Homeland” feature women candidates who aggressively seek the presidency. In both cases, the women start out as principled politicians, but their true nature is revealed as weak and duplicitous. Their presidential tenures end up being ruinous for the nation, and order is restored by a white male – “24’s” Jack Bauer and the male vice president in “Homeland.” HBO’s “Veep” takes the premise of a craven woman politician to an absurd extreme, with actress Julia Louis-Dreyfus winning six consecutive Emmy Awards for her burlesque send-up of the familiar female trope.

Interestingly, both “24” and “Homeland” have important connections to real-world presidential politics. Both series portray the first woman U.S. president as a veteran politician and middle-aged white woman. They bear strong resemblances to the only woman who has been a major-party presidential nominee: Hillary Clinton. Appearing in 2008 and 2017, respectively, the storylines were clearly planned to coincide with what could have been Clinton’s first term as U.S. president.

Yet depictions in “24” and Homeland" of fictional women presidents align with communication scholar Shawn J. Parry-Giles’ findings that the media framed Clinton as inauthentic, Machiavellian, and ultimately, dangerous. 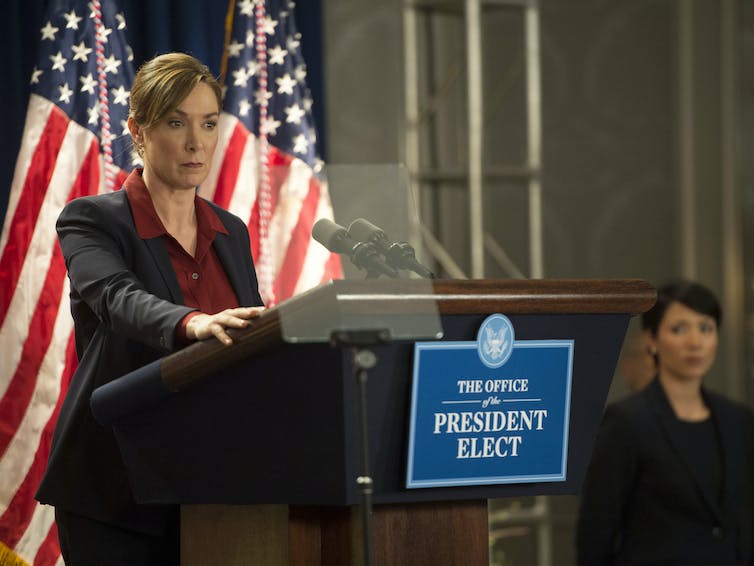 President Elizabeth Keane of ‘Homeland’ is a craven politician who has a ruinous tenure in office.Showtime

That brings us back to our current veepstakes.

Criticisms of women vice presidential prospects echo cultural scripts that insist women who want to be president shouldn’t be trusted. Understanding the resistance to Harris – and Elizabeth Warren, Stacey Abrams and others who announce their eagerness to serve – requires recognizing the diverse forms that backlash against women’s political ambitions can take, which span from calling a congresswoman a “f—— b—-” on the steps of the U.S. Capitol to portraying women presidents as Machiavellian on television dramas.

Did pop culture cause those Biden funders to try to undermine Harris?

No. But the stories we tell ourselves on screen have taught us that women who actually want to be president can’t be trusted. That might be why people like Ambassador Susan Rice, who’s never run for office, and Congresswoman Karen Bass, who said she doesn’t want to run for president, landed on Biden’s short list to favorable coverage.

“At every step in her political career,” The New York Times wrote of Bass, “the California congresswoman had to be coaxed to run for a higher office. Now she’s a top contender to be Joe Biden’s running mate.”

Men who run for president typically have to demonstrate the requisite desire – the so-called “fire in the belly.”

Bizarrely, women are supposed to act like they don’t even want it.

Karrin Vasby Anderson does not work for, consult, own shares in or receive funding from any company or organization that would benefit from this article, and has disclosed no relevant affiliations beyond their academic appointment.