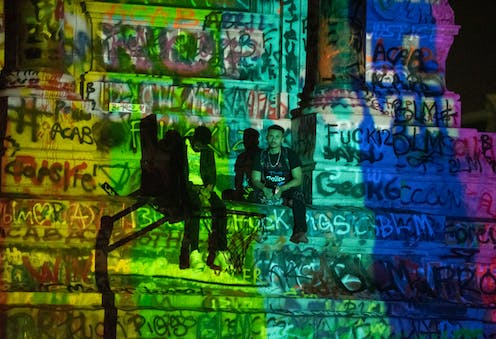 From Richmond to New York City to Seattle, anti-racist activists are getting results as Confederate monuments are coming down by the dozens.

In Richmond, Virginia, protesters have changed the story of Lee Circle, home to a 130-year-old monument to Confederate General Robert E. Lee.

It’s now a new community space where graffiti, music and projected images turn the statue of Lee from a monument to white supremacy into a backdrop proclaiming that Black Lives Matter.

This isn’t a new phenomenon. I’m a historian of celebrations and protests after the Civil War. And in my research, I have found that long before Confederate monuments occupied city squares, African Americans used those same public spaces to celebrate their history.

But those African American memorial cultures have often been overshadowed by Confederate monuments that dominate public space and set in stone a white supremacist story of the past. 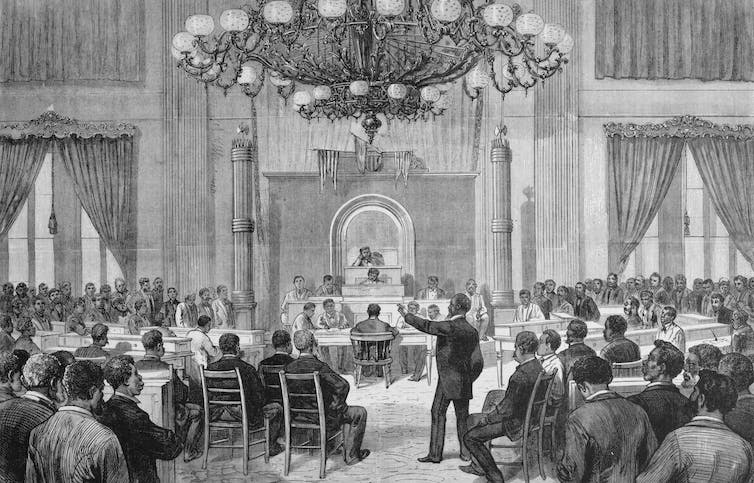 Sketch of the ‘Colored National Convention’ in Tennessee, 1876.From the New York Public Library/Photo via Smith Collection/Gado/Getty Images

In the late 19th and early 20th centuries, African Americans had less power and money than whites did to erect statues to celebrate their past.

Instead, they challenged white dominance of public space using holidays, parades, conventions, mass meetings and other events. Black people used public celebrations such as Juneteenth to tell a positive story about their history, debate and set political goals for the community, applaud the role of Black soldiers and workers, and create a legacy and cultural identity for Black men, women and children.

These community celebrations helped guide Black protests and organizing after the Civil War and continue to inspire activists today.

Here are just a few of the ways African Americans challenged white dominance in public spaces:

• On July 4, 1866, Black people gathered in Richmond’s Capitol Square and decorated the statues of George Washington, Thomas Jefferson and George Mason with garlands and flags – a radical act that a reporter from the Richmond Dispatch fumed was “a liberty which no white man ever yet presumed to take with Virginia’s great work of art.” By claiming the Founding Fathers as their own, African Americans protested against their exclusion from public space and citizenship.

• In 1867 Black men and women publicly assembled at a convention in Lexington, Kentucky, where political leader William F. Butler stated, “First we ha[d] the cartridge box, now we want the ballot box, and soon we will get the jury box. I don’t mean with our fists, but by standing up and demanding our rights.” Butler argued that Black men fought to maintain the Union, “but we were left without means of protecting ourselves….We need and must have the ballot box for that purpose.”

• A Baltimore procession in May 1870 celebrated the ratification of the Fifteenth Amendment, which guaranteed Black men the right to vote. The event had more than 12,000 participants and 20,000 spectators. Newspapers called the procession “vast and magnificent in its appointments, gorgeous in its decorations, and noble in its purposes.” Participants carried banners reading, “Give us equal rights and we will protect ourselves,” and “Equity and justice goes hand in hand.”

These and other African American celebrations asserted their right to public spaces where previously enslaved people might have needed passes or were supposed to be invisible. 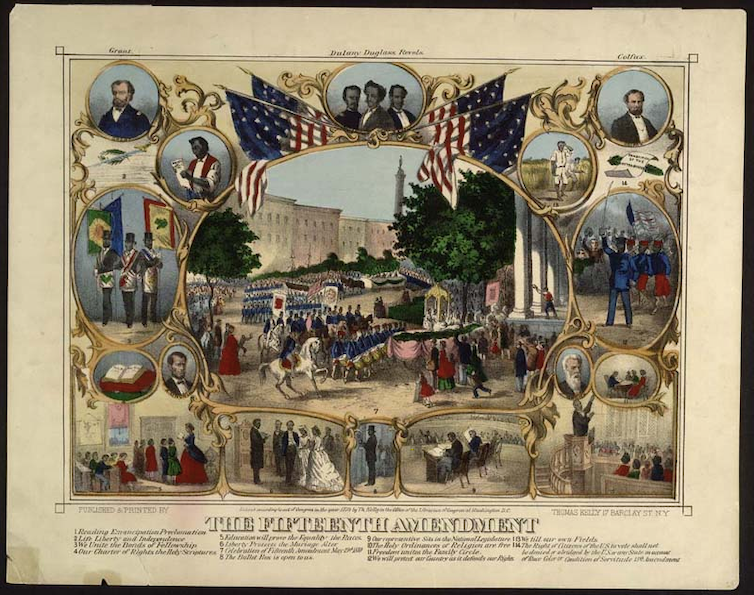 The central part of this image, called ‘The Fifteenth Amendment,’ depicts the grand parade held in Baltimore, Maryland, on May 19, 1870.Thomas Kelly after James C. Beard/Library of Congress

For both Black and white residents, the actions they took to commemorate their cultures demonstrated the importance of residential and commercial spaces, such as city parks, neighborhoods and shopping districts, and especially official civic spaces such as city halls or courthouses.

White organizations raised hundreds of statues in public spaces, especially in the South, during the height of Confederate memorializing in the Jim Crow and civil rights eras.

White supremacist groups such as the United Daughters of the Confederacy erected these Confederate monuments to, in their words, “correct history” by celebrating the Lost Cause, the idea that slavery was a benevolent institution and the Confederate cause was just.

These monuments represented a way to remind African Americans that public spaces, public commemoration and public advancement were not for them.

And while protests that Confederate flags and monuments do not belong in public spaces have grown stronger since 2015, resistance is not new. African Americans have been protesting against Confederate monuments since they were erected.

In Charleston, South Carolina, Black citizens in the 1880s and 1890s mocked and defaced the original monument to John C. Calhoun, a South Carolina congressman and U.S. vice president, who defended slavery as a “positive good.”

Teacher and civil rights activist Mamie Garvin Fields remembered that as a child it seemed as if Calhoun’s statue was “looking you in the face and telling you … I am back to see you stay in your place.” She recalled bringing something to “scratch up the coat, break the watch chain, try to knock off the nose” – perhaps leading to its replacement in 1896 with a much taller monument.

In 1923 the United Daughters of the Confederacy urged Congress to fund a monument “to the faithful slave mammies of the South” in Washington, D.C. The National Association of Colored Women mobilized several Black activist organizations in letter-writing campaigns, petitions and editorials and crushed the plan. The monument was never built.

Rather than watch the festivities or listen to Black speakers, they chose to leave town for the day, stay inside or express disgust among themselves. White people in Richmond celebrated the Fourth of July in the countryside, noted the Richmond Dispatch newspaper, “partly to enjoy the day’s relaxation from business and partly to avoid the spectacle which they could not have avoided witnessing had they remained at home.”

The Baltimore American newspaper noted that those who were too “thin-skinned” to see Black residents celebrating the Fifteenth Amendment shut their doors, “presenting the appearance that ‘nobody was in.’” White residents “refused to witness the procession, declaring they could not gaze upon such a humiliating scene.”

In 2017, white supremacists gathered in Charlottesville, Virginia on Aug. 11-12 for the Unite the Right rally, ostensibly to protect a monument of Robert E. Lee.

It was a battle over what vision of America would prevail in public space in the 21st century.

Chanting “White lives matter” and “Jews will not replace us,” the white supremacists violently attacked counterprotesters.

Today, the tables are turned. Anti-racism protesters are transforming public space by tearing down Confederate monuments or demanding their removal. Years of activism combined with these same types of activities – mourning, celebration of Black pasts, public demands for the future, politics in the streets – have led to the removal of many Confederate monuments, despite the violence and fury of white supremacists.

Activists are telling a new story of African American history out of the relics of a white supremacist past, just as they did in public celebrations in the 19th century.

Shannon M. Smith does not work for, consult, own shares in or receive funding from any company or organization that would benefit from this article, and has disclosed no relevant affiliations beyond their academic appointment.