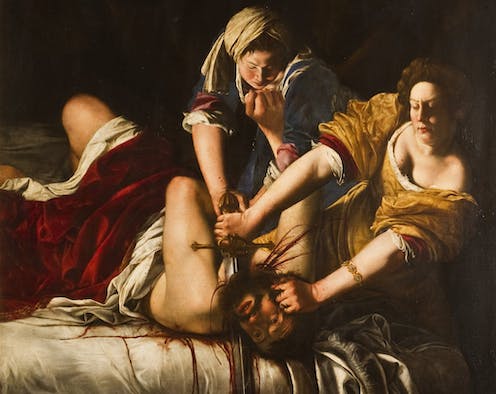 Born in 1593, Italian painter Artemisia Gentileschi was the first woman to establish herself as a successful artist in a profession long dominated by men.

One of the most striking aspects of her work is the way she paints women. Her male contemporaries tended to portray women as passive victims or tentative actors. Artemisia’s women, on the other hand, defend themselves, scheme and relish in perpetrating violence.

When Italian painter Caravaggio painted the biblical scene of Judith beheading Holofernes, he depicted Judith as uneasy – even squeamish – as she decapitates him. 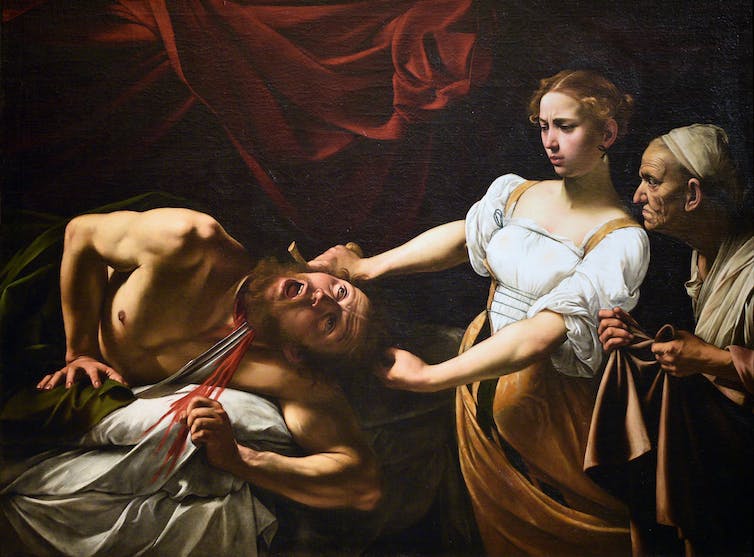 But in Artemisia’s rendering of “Judith Beheading Holofernes,” Artemisia paints a determined Judith slaughtering the Assyrian general. The brutal and bloody act takes place with the assistance of Judith’s female accomplice, who pins Holofernes down.

In our new book, “Women as War Criminals: Gender, Agency, and Justice,” we chose Artemisia’s depiction of Judith for the cover because the painting shows that women, just like men, are capable of perpetrating violence and inciting genocidal acts.

Yet four centuries after Artemisia painted Judith, gender stereotypes and outdated assumptions about women as peaceful and innocent prevent women from being seen as blameworthy.

This matters, because if women are treated as less capable in one regard – even one that involves horrible atrocities – it can extend to other realms, too.

Take the Nuremberg trials, the series of international military tribunals that prosecuted Nazi war criminals. Many Nazi women escaped trial and punishment for their roles in the Holocaust because prosecutors focused on high-level Nazi leaders, exempting those in roles commonly held by women, such as secretaries and clerks.

Decades later, the United Nations international tribunals that investigated atrocities committed in Rwanda and Yugoslavia in the 1990s brought, in each instance, only one woman to justice.

Women were overlooked by international tribunals despite their involvement in perpetrating violence because they were rarely in positions to command others. Nonetheless, Rwandan women participated in murders of adults and children, revealed hiding spots to killing squads and refused to feed refugees. Some of the thousands of women who served in military units across the former Yugoslavia participated in ethnic cleansing by committing extrajudicial killings and acts of torture.

The same double standard prevails in the 21st century. The only woman indicted in the 20-year history of the International Criminal Court is Simone Gbagbo, the former first lady of Cote d’Ivoire.

Gbagbo was indicted in 2012 on four counts of crimes against humanity, sexual violence and persecution for her role in the violence that followed her husband’s loss in the 2011 elections. In 2015, she was convicted of undermining the security of the state and sentenced to 20 years in prison by an Ivorian court. She was later acquitted of crimes against humanity and in 2018 received a presidential pardon. She was ultimately never brought before the International Criminal Court. 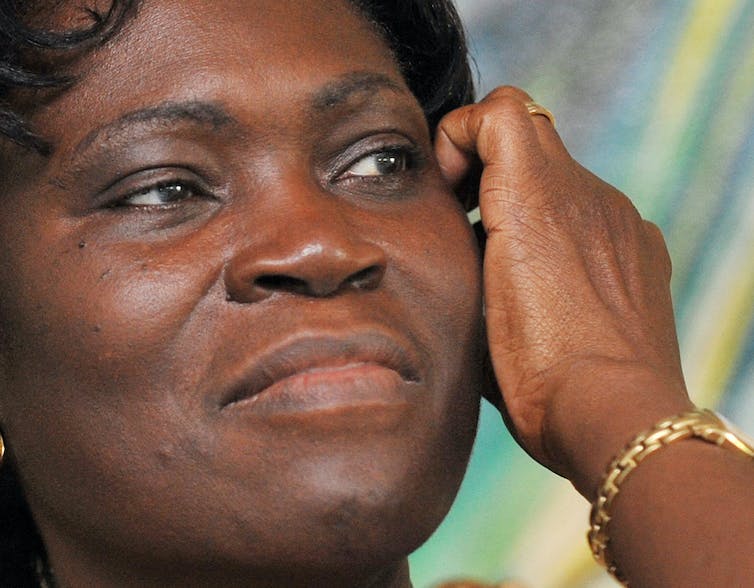 When women are taken to court, some will use gender strategically in an effort to secure favorable treatment.

Some, for example, claim that men made them do it. Despite her political rank, Biljana Plavšić, former co-president of Republika Srpska in Bosnia, argued during her trial that she was manipulated by men in similar leadership positions.

Samantha Elhassani, an American sentenced to 6 ½ years in prison for aiding and abetting the Islamic State, had her sentence reduced by arguing that her husband, who was killed fighting for the group, had misled and abused her.

Similarly, the defense team for Lynndie England, who was court-martialed and sentenced to three years in prison by the U.S. Army after she posed in the infamous photos of abuse at Abu Ghraib prison in Iraq, argued that she was just following the lead of her manipulative boyfriend.

Studies have also shown that when women choose to plead guilty or show remorse, they are more likely to see reduced charges and sentences, especially if their behavior contrasts with defiant male defendants.

For example, after Plavšić pleaded guilty to one count of persecution on political, racial and religious grounds, the prosecution dropped the remaining eight charges, which included genocide. In contrast, Radovan Karadžić, who served as co-president alongside Plavšić, pleaded not guilty to all charges against him. He received a 40-year sentence that was increased to life in prison on appeal. 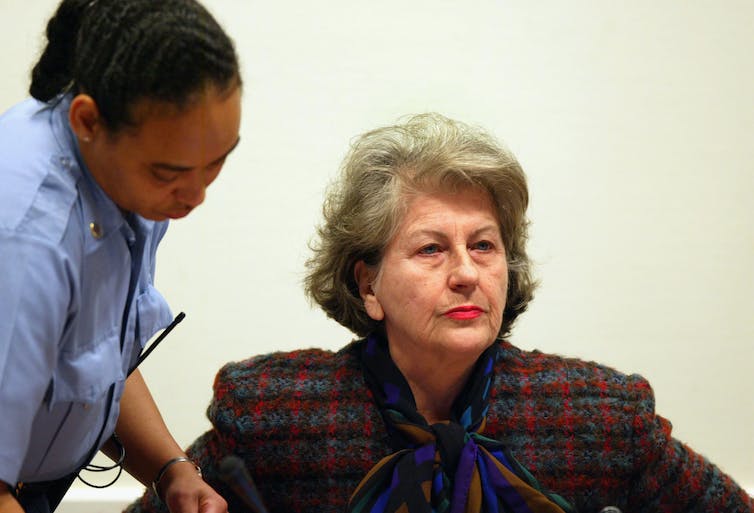 After Biljana Plavšić pleaded guilty – while claiming she had been manipulated – she received a light sentence.Michel Porro/Getty Images

Advocates of criminal justice reform argue that societies around the world – and the United States in particular – would benefit from lighter sentences and less punitive criminal justice systems.

Justice, then, would imply not harsher sentences for women, but rather fewer disparities in the treatment of men and women.

The fact that women can occupy the dual role of oppressor and oppressed is a reality that is still not fully understood. Yet 400 years ago, Artemisia skillfully portrayed women as victims and as victimizers. Adamant about her own capabilities, she once told one of her patrons, “I’ll show you what a woman can do.”

Centuries later, her words are just as resonant. Though Artemisia was popular in her era, art historians tended to overlook her contributions to the canon. No longer. This winter the National Gallery in London finally devoted a full-scale exhibition to this Baroque master.

Her works reflect that women’s agency is a double-edged sword. Women are capable of not just of achievement but also of depravity.

Jessica Trisko Darden is affiliated with the Program on Extremism at George Washington University.

Izabela Steflja is affiliated with the Newcomb Institute at Tulane University.