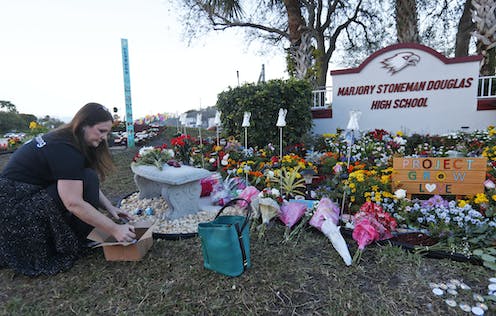 A woman places painted rocks at a memorial to those killed in the 2018 Parkland, Florida, school shooting.AP Photo/Wilfredo Lee

While conspiracy theories are not limited to any topic, there is one type of event that seems particularly likely to spark them: mass shootings, typically defined as attacks in which a shooter kills at least four other people.

When one person kills many others in a single incident, particularly when it seems random, people naturally seek out answers for why the tragedy happened. After all, if a mass shooting is random, anyone can be a target.

Pointing to some nefarious plan by a powerful group – such as the government – can be more comforting than the idea that the attack was the result of a disturbed or mentally ill individual who obtained a firearm legally.

In the United States, where some significant portion of the public believes that the government is out to take their guns, the idea that a mass shooting was orchestrated by the government in an attempt to make guns look bad may be appealing both psychologically and ideologically.

Our studies of mass shootings and conspiracy theories help to shed some light on why these events seem particularly prone to the development of such theories and what the media can do to limit the ideas’ spread.

Mass shootings and conspiracy theories have a long history. As far back as the mid-1990s, amid a spate of school shootings, Cutting Edge Ministries, a Christian fundamentalist website, found a supposed connection between the attacks and then-President Bill Clinton.

The group’s website claimed that when lines were drawn between groups of school-shooting locations across the U.S., they crossed in Hope, Arkansas, Clinton’s hometown. The Cutting Edge Ministries concluded from this map that the “shootings were planned events, with the purpose of convincing enough Americans that guns are an evil that needs to be dealt with severely, thus allowing the Federal Government to achieve its Illuminist goal of seizing all weapons.”

Beliefs persist today that mass shootings are staged events, complete with “crisis actors,” people who are paid to pretend to be victims of a crime or disaster, all as part of a conspiracy by the government to take away people’s guns. The idea has been linked to such tragedies as the 2018 Marjory Stoneman Douglas High School shooting in Parkland, Florida, and the Sandy Hook Elementary attack that resulted in the deaths of 20 children in Newtown, Connecticut, in 2012.

These beliefs can become widespread when peddled by prominent people. U.S. Rep. Marjorie Taylor Greene has been in the news recently because of her belief that the Parkland shooting was a “false flag,” an event that was disguised to look like another group was responsible. It’s not clear, though, in this instance who Rep. Greene felt was really to blame.

Conservative personality Alex Jones recently failed to persuade the Texas Supreme Court to dismiss defamation and injury lawsuits against him by parents of children who were killed in the 2012 Sandy Hook shooting. Jones has, for years, claimed that the Sandy Hook massacre didn’t happen, saying “the whole thing was fake,” and alleging it happened at the behest of gun-control groups and complicit media outlets.

After the country’s deadliest mass shooting to date, with 59 dead and hundreds injured in Las Vegas in 2017, the pattern continued: A conspiracy theory arose that there were multiple shooters, and the notion that the shooting was really done for some other purpose than mass murder. 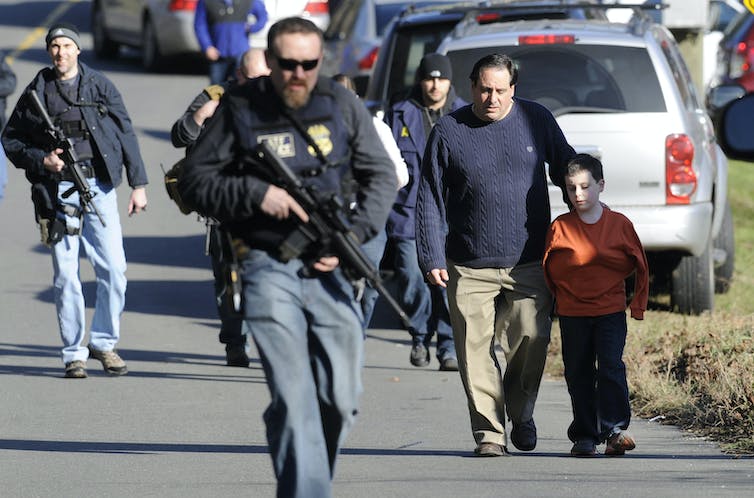 A parent is reunited with a child in Newtown, Connecticut, after the 2012 school shooting at Sandy Hook Elementary School.AP Photo/Jessica Hill

Making sense of the senseless

These conspiracy theories are all attempts to make sense of incomprehensibly terrifying events. If a lone shooter, with no clear motive, can singlehandedly take the lives of 60 individuals, while injuring hundreds more, then is anyone really safe?

Conspiracy theories are a way of understanding information. Historian Richard Hofstadter has indicated they can provide motives for events that defy explanation. Mass shootings, then, create an opportunity for people to believe there are larger forces at play, or an ultimate cause that explains the event.

For instance, an idea that a shooter was driven mad by antipsychoticdrugs, distributed by the pharmaceutical industry, can provide comfort as opposed to the thought that anyone can be a victim or perpetrator.

Polls have shown that people worry a lot about mass shootings, and more than 30% of Americans said in 2019 that they refused to go particular places such as public events or the mall for fear of being shot.

If the shootings are staged, or the results of an enormous, unknowable or mysterious effort, then they at least becomes somewhat comprehensible. That thought process satisfies the search for a reason that can help people feel more comfort and security in a complex and uncertain world – especially when the reason found either removes the threat or makes it somehow less random.

Some people blame mass shootings on other factors like mental illness that make gun violence an individual issue, not a societal one, or say these events are somehow explained by outside forces. These ideas may seem implausible to most, but they do what conspiracy theories are intended to do: provide people with a sense of knowing and control.

Conspiracy theories can spark real-world threats – including the QAnon-inspired attack on a pizza restaurant in 2016 and the Jan. 6 Capitol insurrection.

They also misdirect blame and distract from efforts to better understand tragedies such as mass shootings. High-quality scholarship could investigate how to better protect public places. But robust debates about how to reduce events such as mass shootings will be less effective if some significant portion of the public believes they are manufactured.

Some journalists and news organizations have already started taking steps to identify and warn audiences against conspiracy theories. Open access to reputable news sources on COVID-19, for example, has helped manage the misinformation of coronavirus conspiracies.

Explicit and clear evaluation of evidence and sources – in headlines and TV subtitles – have helped keep news consumers alert. And pop-up prompts from Twitter and Facebook encourage users to read articles before reposting.

These steps can work, as shown by the substantial drop in misinformation on Twitter following former President Donald Trump’s removal from the platform.

Mass shootings may be good fodder for conspiracy theories, but that does not mean people should actually consume such ideas without necessary context or disclaimers.

Michael Rocque receives funding from the National Institute of Justice (2018-75-CX-0025). He is affiliated with the Scholars Strategy Network.

Stephanie Kelley-Romano does not work for, consult, own shares in or receive funding from any company or organization that would benefit from this article, and has disclosed no relevant affiliations beyond their academic appointment.