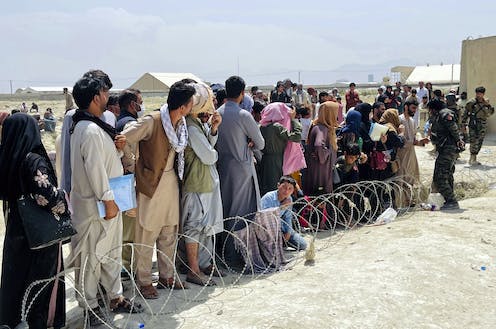 Hundreds of people who want to flee the country gathered outside the international airport in Kabul, Afghanistan, Aug. 17, 2021AP photo

President Joe Biden has hailed the end of the U.S. engagement in Afghanistan as a historic achievement, with 120,000 people evacuated by air. Behind the widely viewed scenes of chaos at the Hamid Karzai International Airport, a massive effort of volunteers and nongovernmental organizations used social media to help identify, locate and advocate for Afghans desperate to leave the country, using social media. It has been characterized as a “digital Dunkirk” – in reference to the mass evacuation of Allied soldiers by sea during World War II.

Nonetheless, the president and his administration have weathered considerable criticism about the execution of the long-planned withdrawal, much of it focused on the complex and frustrating process for Afghan allies who needed visas in order to leave the country and head to the U.S.

In mid-July, U.S. Embassy staff in Kabul raised the alarm about the Taliban’s advances, recommending that the administration take action to speed up the protection of Afghan allies by granting them what’s called a “special immigrant visa,” also known as the SIV.

Had the visa process worked better, more Afghan allies might have been able to flee possible deadly retaliation by the Taliban.

“The SIV program is obviously not designed to accommodate what we just did, in evacuating over 100,000 people,” U.S. Secretary of Defense Lloyd Austin explicitly acknowledged in a press conference at the end of the airlift.

And the perilous situation of Afghans who want to flee now, but can’t, is a reminder that populations face terrible danger in conflict zones across the globe – but aren’t able to make their way to safety in other countries. 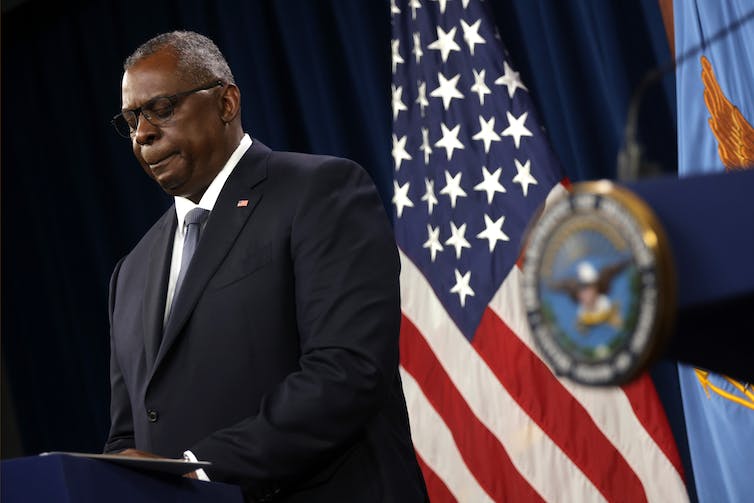 Defense Secretary Lloyd Austin at the Sept. 1, 2021, press conference at which he said the U.S. special immigrant visa program was not adequate for the job of rescuing Afghan allies.Alex Wong/Getty Images

SIVs allow Afghan and Iraqi interpreters and translators for the U.S. military whose work “placed a target on their backs” to come live in America.

In 2009, a distinct Afghan SIV program was established by the U.S. and was originally designed to provide 7,500 visas over five years. The quota does not include family members who are entitled to come to the U.S.

For years, advocates have raised concerns about serious delays with processing visas – up to 3 ½ years at one point. Some advocacy groups even sued the federal government to break the logjam.

With the onset of the COVID-19 pandemic, the Trump administration slowed the review process even more. That move was part of a larger policy to allow fewer refugees into the country.

A question of planning

A backlog of 17,000 cases in the Afghan SIV program faced the Biden administration in January 2021. Throughout the spring, advocates urged the administration to take more urgent steps to expand the program’s focus and get Afghan allies to the U.S. faster and in greater numbers.

It was not until mid-July 2021 that Operation Allies Refuge was launched by President Biden to evacuate SIV applicants who were in later stages of the process.

By the end of July, Congress authorized the approval of 8,000 additional visas for the applicants, waived the onerous pre-approval medical examination requirements and removed other restrictions. In early August, the administration expanded protection to a larger category of people – known as “P2” – such as those who worked for nongovernmental organizations and media outlets in Afghanistan supported by the U.S.

But by Aug. 13, evacuation of SIV applicants was deemphasized to make way for U.S. citizen evacuation from Afghanistan. Government insiders and advocates criticized the U.S. State Department at that time for delays in processing SIV applications and failure to coordinate with the Pentagon to get applicants into the Kabul airport. 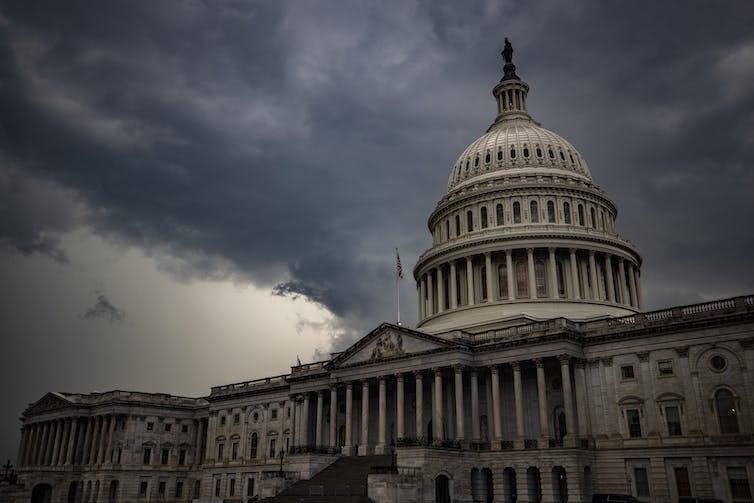 By the end of July, the U.S. Congress had authorized the approval of 8,000 additional visas for Afghan applicants, but it was too little and too late.Samuel Corum/Getty Image

Defense Secretary Austin also acknowledged that the SIV program was “designed to be a slow process.”

Immigration experts have pointed out that the Biden administration had a number of other options, based on prior experiences with Haitians and Cubans as well as Vietnamese, Iraqi Kurd and Kosovar Albanian refugees, to expand and speed up refugee protection.

Afghans are eligible, for example, for quicker forms of refugee protection, such as humanitarian parole, which allows individuals who face dangerous conditions in their home country to gain emergency entry into the U.S., though the status is temporary and without benefits. Using the regular U.S. Refugee Admissions Program would have required raising the quotas and dealing with its own backlog.

In the end, many of the 100,000 or so Afghans who were trying to get SIVs or other forms of protection were evacuated to other countries, to what’s called “lily pad sites,” for further security screenings before entry into the U.S.

The estimates of individuals remaining in Afghanistan who are at risk for Taliban persecution are staggering and difficult to confirm.

These numbers do not account for Afghans who worked at the forefront of nation building, including for the government, women’s and human rights organizations, the media and the United Nations mission. Even before the fall of Kabul, Afghans were the second-largest refugee population globally, after Syrians.

And what these people – especially women and girls – face is currently extremely precarious. A new government is taking shape that represents the hard-line Taliban leadership of the past.

While the Taliban have sought to reassure the international community that they will allow Afghans to leave the country and respect human rights, recent violence against women’s rights protesters and reports of human rights abuses belie the posturing. The ISIS-K attack on the Kabul airport indicates how fragile Taliban security could be. Law and security scholars have warned against global recognition of a terrorist-controlled government.

Amid a growing humanitarian disaster involving hunger and extreme poverty, the United Nations estimates that half a million more Afghans might seek refugee status by the end of 2021.

While declaring an end to U.S. military deployments to support nation building, President Biden has asserted his commitment to make human rights central to his foreign policy.

Minimizing the military’s role should be welcome to experts who contend that it is the U.S.-led war on terror that failed in Afghanistan, not nation building.

How exactly this helps Afghans who want to flee but haven’t been able to yet isn’t clear. And how to ensure the wide-scale protection of populations facing mass atrocity and human rights violations without the threat of U.S.-led coalition military power also remains uncertain – in Afghanistan and anywhere else across the globe.

Shelley Inglis does not work for, consult, own shares in or receive funding from any company or organization that would benefit from this article, and has disclosed no relevant affiliations beyond their academic appointment.