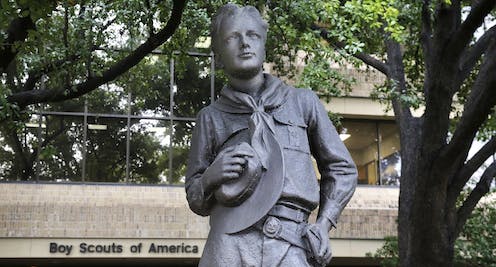 Thousands of men say they were sexually abused as children taking part in the Boy Scouts.AP Photo/LM Otero

1. What does it mean that survivors will vote on the plan?

The Boy Scouts filed bankruptcy in February 2020 in the wake of lawsuits publicly exposing the decades-long sexual abuse of Scouts, with the intent to use bankruptcy to set up a fund to compensate survivors. The Boy Scouts’ plan to exit bankruptcy includes settlements with insurance companies, the Church of Jesus Christ of Latter-day Saints, which previously funded scouting activities, the Boy Scouts and its local councils. These settlement deals total almost US$1.9 billion.

The roughly 250 local councils will contribute $500 million, and the national umbrella organization, the Boy Scouts, will put in up to $320 million. Insurers and the Church of Jesus Christ of Latter-day Saints will collectively contribute a bit under $1.1 million. If the plan is approved, the settlement will prohibit further lawsuits against the Boy Scouts and its local councils.

For the judge to approve the Boy Scouts’ plan, a majority of the nearly 82,000 survivors who filed claims in the bankruptcy case and businesses owed money by the Boy Scouts – that is, its creditors – must vote in favor of it. The survivors will receive ballots and informational packets by mid-October. Survivors must return the ballots by Dec. 15, 2021. The votes will be tallied by Jan. 4, 2022. The judge has scheduled a hearing on Jan. 24, 2022, to consider the results of the voting and whether to approve the Boy Scouts’ bankruptcy exit plan.

Abuse claimants face a tough decision. Throughout the bankruptcy case, survivors and their attorneys have called out the Boy Scouts for neglecting to protect children for decades and instead shielding abusers. The committee that represents abuse survivors as a whole in the bankruptcy case has counseled survivors to reject the plan and has stated that the plan is “grossly unfair.” In contrast, attorneys separately representing tens of thousands of abuse claimants have encouraged survivors to vote in favor of the plan because they believe it is the best possible outcome.

2. How much money may abuse survivors receive?

In addition to voting in favor of or against the plan, the ballot that survivors will receive requires them to choose between two options for payment. They can get an “expedited distribution” payment of $3,500, with almost no questions asked. Or they can choose to go through an evaluation process of their abuse claim. If they choose the process, survivors will receive amounts based on the severity of the abuse they suffered and other criteria. Based on the criteria, a survivor could receive as little as $3,500 or as much as $2.7 million.

3. How could approval of the plan help the Boy Scouts?

The Boy Scouts’ membership has plunged in recent years, decreasing by 43% from about 2 million in 2019 to 1.1 million in 2020. The decline is partly due to the public’s growing awareness of the alleged widespread molestation of Scouts and the Boy Scouts’ decades-long cover-up of the abuse.

There likely are other causes, such as the COVID-19 pandemic, the Boy Scouts’ battles over the inclusion of LGBTQ individuals and the Church of Jesus Christ of Latter-day Saints’ decision in 2019 to pull its 400,000 members from the Boy Scouts to start its own youth program.

Every time there is news from the case, the Boy Scouts’ history of turning a blind eye to the abuse is put on display again. As the case continues, churches and other organizations that historically have hosted Boy Scout troops and events may think twice about continuing their relationships, especially if they worry about their own liability for the abuse suits.

4. What happens if the plan is not confirmed?

A possible outcome of the hearing scheduled in January 2022 is that the judge does not approve the plan. This might happen for several reasons. Not enough abuse survivors or other creditors may vote in favor of the plan. There also are a few elements of the settlement that the judge still must consider before signing off.

If the judge does not approve the plan, the Boy Scouts’ bankruptcy case will continue. The Boy Scouts will return to negotiations with insurers, abuse survivors and others to try to craft another settlement agreement and bankruptcy exit plan. This outcome could make the bankruptcy case drag on even longer.

5. What’s the significance of the voting process for survivors?

Each survivor’s decision about how to vote is their own. Although survivors can seek guidance from their attorneys, the decision ultimately must be made by each of them. In bankruptcy, voting on the plan is the moment when everyone has a voice.

Abuse survivors finally have the chance to have their voice heard. They have the power to tell the Boy Scouts, through their vote, how they feel about how the Boy Scouts has responded to a deluge of abuse claims and the “price tag” that has been attached to their pain.

Pamela Foohey does not work for, consult, own shares in or receive funding from any company or organisation that would benefit from this article, and has disclosed no relevant affiliations beyond their academic appointment.