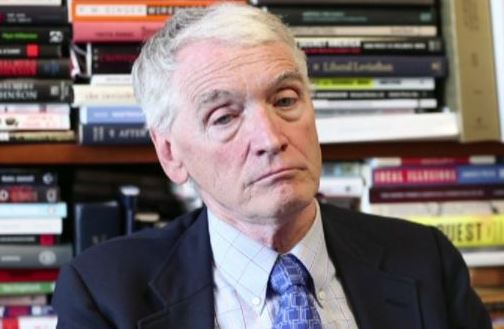 By now you have probably  seen PR for the new movie “Truth” that presents a sympathetic portrayal by Robert Redford of Dan Rather and his story about Bush’s military service.

Staff Sergeant Camilo Mejia was the first GI Resister to Bush’s criminal war of aggression against  Iraq. S.S. Mejia was in combat in Iraq. He would capture insurgents, and then turn them over for interrogation, only to see them tortured. As a matter of good faith and conscience, he refused to do it anymore and was court-martialed for desertion, facing 2 years for his act of courage, integrity and principle.

Just before his court-martial opened at Fort Stewart GA, S.S. Mejia accepted an offer to appear with Dan Rather on 60 Minutes in order to explain to the American People why he could no longer aid and abet torture by others in Iraq. But when S.S. Mejia got on  60 Minutes, Chickenhawk Dan

Rather viciously  ambushed him, accusing him of being a traitor and a coward. It was sleaze-ball journalism of the worst type by a scumbag journalist of the first rank. It was clearly an attempt by Rather to poison the jury pool for S.S. Mejia’s court-martial. Just as I was flying down to Ft. Stewart to help defend S.S. Mejia, the Abu Ghraib Torture Scandal broke to national headlines.

We knew all about it from S.S. Mejia who refused to have anything more to do with it. After a Kangaroo Court-Martial Proceeding, S.S. Mejia got  8 months, which was more than many   of the torturers, most of whom got off scot free.

We then got S.S. Mejia adopted a Prisoner of Conscience by Amnesty International. In other words,

Dan Rather maliciously  inflicted outright character assassination in front of Millions of Americans upon an Amnesty International Prisoner of Conscience. And that is because Dan  Rather has no conscience!

He  got what he deserved.

LeVine: In my own research on war crimes committed by US forces in Iraq. I counted at least two-dozen classes of offenses systematically committed by the Occupation administration and US or US-allied military forces in the invasion and subsequent period of CPA (Coalition Provisional Authority) rule. This includes violations of articles and 17, 18, 33, and 147 of the Geneva Convention covering the killing, hostage-taking and torturing of civilians

Boyle: As I just argued at Fort Stewart Georgia in the court martial proceedings for Sgt. Camilo Mejia for desertion, the accountability here goes directly up the chain of command under the terms of the US Army Field Manual 27-10.

Specifically, paragraph 501 makes clear that commanders who have ordered or knew or should have known about war crimes and failed to stop it are themselves guilty of war crimes. If you look then at the public record, it is clear that Gens. Sanchez and Miller ordered war crimes and both should be relieved of command immediately: abuse of prisoners in violation of the Geneva Conventions. As for General Abizaid, the overall commander of US forces in Southwest Asia, he admitted in his Senate hearings that he should have known about the war crimes at Abu Ghraib, so basically he's already incriminated himself under the rules of the US Army Field Manual 27-10 In addition, above Abizaid you have Rumsfeld and Wolfowitz.

Again my reading of the public record including the Taguba and Red Cross reports is that they either knew or should have known about all these war crimes. Indeed, if you read the ICRC report, - and as I testified under oath and under cross-examination (and was not contradicted) at the Mejia court-martial proceedings, - the widespread and systematic nature of these abuses rise to the level of crimes against humanity, going all the way up through the chain of command. Culpability also extends to Undersecretary of Defense for Intelligence General William G. Boykin and Defense Undersecretary Stephen Cambone, who reports directly to Undersecretary of Defense Douglas Feith. And through this line it appears to me that Rumsfeld is culpable, because he was at Abu Ghraib last fall. Indeed, Sy Hersch's New Yorker article on Abu Ghraib claims with good substantiation that he was totally aware and even signed off on the use of techniques which are clearly torture.

Rumsfeld was given a tour by Brig. General Janet Karpinski, who was supposed to be in charge of the prison-although she said nothing when she was prohibited from accessing certain areas of it-and so she's also accountable. It's important to understand that the Geneva Conventions, the Hague Regulations of 1907, the U.S. Army Field Manual, all mandate that a criminal investigation be opened. And how President Bush, as Commander in Chief would be accountable under Field Manual 27-10 precisely because he is Commander in Chief of the US armed forces under the US Constitution. We know the White House knows this because if you read White House Counsel Alberto Gonzales's memo, he specifically tries to exempt the US from the Geneva Conventions for Guantanamo and Afghanistan. You can see that Gonzalez was afraid of Bush and others being held directly accountable.

Moreover, because Powell dissented, we know there was a debate about this, so Bush had to have been aware of the implications of what was being done, which is also backed up by the memos from Ashcroft. These memos have been unearthed by Newsweek. So ultimately what we have here are people at the highest levels of the chain of command guilty of ordering or not preventing torture, which is both an international crime against the Geneva Conventions and the Torture Convention and a domestic crime as well. What we have then is a conspiracy among the aforementioned individuals to commit war crimes and crimes against humanity. Let me add one more thing that's very important to remember: The principles set forth in 27-10 of personal criminal accountability for war crimes goes back to the Nuremburg Charter, Judgments and Principles derived from the post-World War II trials of Nazi war criminals. Similar principles of criminal accountability were applied by the United States to the Japanese Imperial War criminals.

LeVine: In fact, President Bush has compared the war on terror to the war against the Nazis.

Boyle: Then we have even more reason to bring this to people's attention: The Nuremburg Principles were in fact originally the idea of the US Government which then orchestrated the prosecutions in Nuremburg. People need to understand the pedigree and heritage here. These are very grave offenses which the US government a generation ago prosecuted and executed Nazis for committing. And Japanese war criminals too.

LeVine: How can any of the people you mentioned be prosecuted?

Boyle: The military could do it, or the Dept. of Justice, which would have default power to do so if the military didn't. But for this of course we'd need a special prosecutor and that law has been allowed to lapse. Attorney General Ashcroft, who is clearly part of the criminal conspiracy, would never push a war crimes investigations against his colleagues or President Bush.