Since the mid-1980s, the Unsolved Mysteries television program has investigated thousands of weird and wonderful tales.

The popularity of the series over almost 35 years, more than 600 episodes, and five reboots, is testament to the high level of interest in narratives that don’t have a neat resolution. The latest incarnation – from Stranger Things executive producer Shawn Levy, an avid fan of the original – is coming to Netflix this week.

The question of why the format has such enduring appeal may not be a difficult one to solve.

Unsolved Mysteries has always had a dual nature, on the one hand dealing with real events such as murders and kidnappings and, on the other, delving into stories of alien abductions, ethereal hauntings and demonic visitations. One could argue the two categories are incongruous to each other, but underneath they share a powerful psychological bond.

The new series will continue looking for clues and viewer tips.

Humans have a strong propensity to believe in things that have, on face value, no immediate rational explanation.

In a 2014 survey conducted by Foxtel’s Syfy channel, 88% of Australians surveyed said they believed paranormal phenomena may well exist, with 50% believing in ghosts and spirits and 42% believing in UFOs and aliens.

Stephen Law, who researches the philosophy of religion, writes that scientists believe humans developed an internal hyperactive agency-detecting device (HADD) to ascribe intention and action to inanimate objects or things we can’t see. He writes we did this as a defence mechanism – that rustle in the bush could be a predator we can see or a ghost we can’t. Being alert to all these possibilities might feel like self-protection.

This propensity has also led to the belief in invisible agents, such as demons or gods, because they could have demonstrable effects on our lives.

Natural disasters were widely attributed to supernatural beings in human history, and still are in many cultures.

Read more: Cyclones, screens, lost souls: how the ghosts we believe in reflect our changing fears

But HADD doesn’t account for other supernatural beliefs such as aliens, time travel, spontaneous combustion or a myriad mysteries people believe in and that are represented on Unsolved Mysteries.

Though it is possible to find scientific discussion behind many supernatural occurrences, it appears many people still steadfastly refuse to accept rational explanations.

The series theme song has been used in parodies since.

Unsolved Mysteries is heavily based on personal testimony. Interviews on the show have people describe experiences with aliens or ghosts in vivid detail.

The ability to ignore reason and continue our beliefs appears hard wired into our psyche. Social psychologists Jennifer Whitson and Adam Galinsky found people often attribute signs and patterns in processes happening around them when none actually exist. Doing so creates much-desired order in their minds when faced with random, or unnatural, situations.

Others have argued these interpretations are a result of biochemistry. Neuroscientists have demonstrated that when test subjects hear phrases with the word “God” in them, areas of the brain activate and trigger positive emotions. Belief in all manner of supernatural forces might provide believers with comparable emotional highs.

Developmental psychologist Bruce Hood says a process called “magical thinking” makes our brains attribute special beliefs to things because of emotional attachments. This may be a lucky charm or a bad omen.

Questionnable reenactments became a hallmark of the series.

Similarly, true crime stories tap into strong emotions and feelings about the dark side of human nature.

Psychologist Meg Arroll says we feel safe to enjoy re-enactments of real crimes (like the sometimes maligned ones on older seasons of Unsolved Mysteries) because doing so allows us to explore dark human possibilities at a safe distance. The thrilling nature of crime stories might also give us an adrenaline hit.

Women in particular appear drawn to true crime because it gives them tips on how to defend themselves against an attacker. It has been speculated viewers enjoy a sense of schadenfraude when they watch true crime stories, because they are relieved the events are not happening to them. 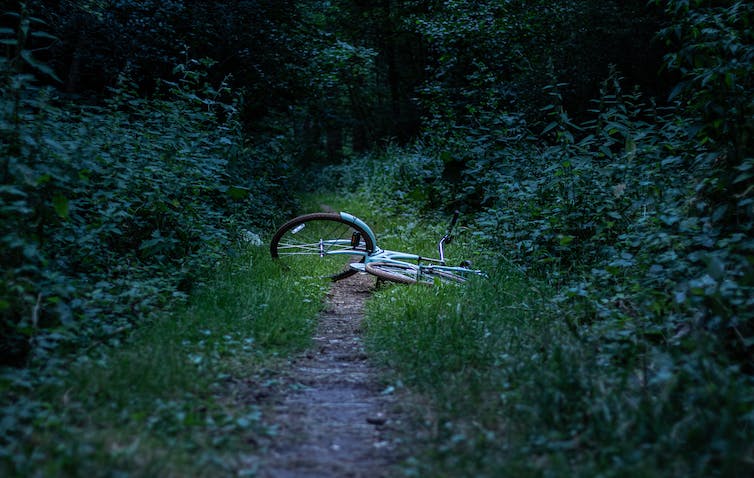 Do we get a vicarious thrill from true crime? Or a sense of safety? Joël in 't Veld/Unsplash, CC BY

The popularity of shows like Unsolved Mysteries lies in their capacity to deliver positive emotional responses regardless of whether we are watching someone else fall victim to a deadly crime, an alien abduction or a ghost haunting.

Unsolved Mysteries reinforces the belief we can easily fall victim to a world full of horrors both real and supernatural. And we can see it all from the safety of the couch.