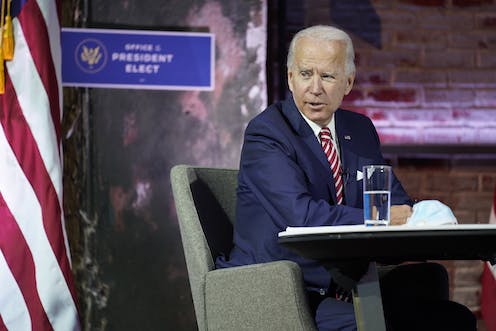 The economy will be one of the president-elect's top priorities in January. AP Photo/Andrew Harnik

Editor’s note: President-elect Joe Biden has said fixing the economy will be one of his administration’s top priorities when he takes office in January. R. Andrew Butters, assistant professor of business economics and public policy at Indiana University and a visiting scholar at the Federal Reserve Bank of Chicago, explains the challenges Biden will face and what kind of stimulus the U.S. will need.

1. What are the top economic challenges facing Biden?

The pandemic and the subsequent impacts on the economy have been nothing short of devastating. But the primary challenge actually isn’t so much an economic one at all; it is a public health challenge. Until COVID-19 is under control, I think optimism about the health of the economy will remain fleeting.

The job losses and slowdown in economic activity experienced across the country are likely to persist for many months or even years. The effects have also been highly uneven across industries. Employment in some sectors, such as finance and insurance, has fully recovered, while industries like leisure and hospitality are still struggling to get back on their feet. These uneven losses could also contribute to increases in income and social inequality.

The severe impact can be seen in the number of individuals filing for unemployment insurance for the first time – one of the most timely economic indicators. Until this year, the highest this figure had ever reached in a single week was just under 700,000 – a level previously associated with only the depths of a recession. The U.S. has broken that record every single week since March 21, with a peak of over 6 million in late March and early April. In the week of Nov. 14, another 1 million people filed for unemployment benefits, including those who received special pandemic-related aid intended to help people ineligible for the regular program.

Put simply, the Biden administration faces a troubled economy the likes of which haven’t been seen in U.S. history. Moreover, traditional monetary and fiscal stimulus measures are either unavailable or unlikely to be all that effective in boosting economic activity in all sectors.

2. Biden has said he plans to push for a significant stimulus package. How can he ensure it’s effective?

Most economists would agree that stimulus that is effectively targeted and efficiently disbursed yields the most “bang for your buck.” It helps to focus aid on workers or industries most affected and make sure it’s tied to changing local conditions.

One likely focus for the Biden team will be income support, much like what we saw in parts of the Coronavirus Aid, Relief and Economic Security Act, which offered generous unemployment benefits – the last of which will expire in December. But not all aid is created equal, and economists favor stimulus with large multiplier effects – that is, how much economic activity is generated for every dollar of spending.

For example, if I have US$1,200 in extra income from the government, I might go out and spend some of that on a nice meal with my family at a local restaurant. The restaurant then uses that money to pay its employees and buy more supplies from other businesses, both of which then spend the money on other things they need. The more everyone spends from that initial dollar, the higher the multiplier. If a lot of people like me use that extra money for savings or to pay off credit card debt, the multiplier goes down, making the stimulus less impactful.

But while providing more income support will help those most hurt by the pandemic, it won’t necessarily bring jobs back. Stimulus packages that attempt to invest in certain sectors of the economy to generate demand for labor and create jobs could go further in providing a longer-term impact on the economy.

So I wouldn’t be surprised if the administration also provides stimulus that aims to bolster hiring, such as by spending billions of dollars on infrastructure. The 2009 American Recovery and Reinvestment Act that Biden worked on included this type of infrastructure spending.

Stimulus spending should also not overlook state and local governments, which are in desperate need of support to avoid severe cuts in services, such as transportation, education and health, which would seriously hamper any economic recovery.

3. Once Biden is sworn in, how soon are those hurt by the pandemic likely to feel some relief?

I would expect that the Biden administration will try to put together some sort of relief package quickly once in office.

Most of the failure by members of Congress – and the White House – to reach an agreement on another stimulus package has been due to the uncertainty associated with the November election. Now that the election is over – apart from two races that will decide which party controls the Senate – I suspect that the administration and Congress will try to put a fiscal package together quickly once Biden takes office.

4. How much of this recovery is within Biden’s control, and how much will be dependent on the pandemic?

Just as the arrival of the pandemic and collapse of the economy were mostly outside the control of President Donald Trump, it would be fair to say there is a limit to the amount of direct control Biden will have on the recovery. Ultimately it will be guided by the progression of the pandemic, as we have seen in other countries.

That being said, public health policies that speed up the development and distribution of an effective vaccine are likely to make a big difference not only in ending the pandemic but in reviving the economy as well. The amount of stimulus Biden and Congress provide, and how well it is targeted, will likely determine how quickly the economy recovers.